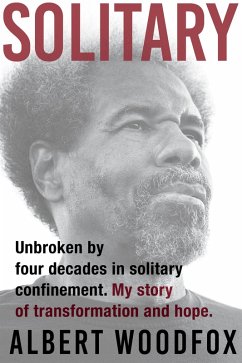 "An uncommonly powerful memoir about four decades in confinement... A profound book about friendship [and] solitary confinement in the United States." -New York Times Finalist for the Pulitzer Prize and the National Book Award Solitary is the unforgettable life story of a man who served more than four decades in solitary confinement-in a 6-foot by 9-foot cell, twenty-three hours a day, in Louisiana's notorious Angola prison-all for a crime he did not commit. That Albert Woodfox survived at all was a feat of extraordinary endurance. That he emerged whole from his odyssey within America's prison …mehr

Andere Kunden interessierten sich auch für
Produktbeschreibung
"An uncommonly powerful memoir about four decades in confinement... A profound book about friendship [and] solitary confinement in the United States." -New York Times Finalist for the Pulitzer Prize and the National Book Award Solitary is the unforgettable life story of a man who served more than four decades in solitary confinement-in a 6-foot by 9-foot cell, twenty-three hours a day, in Louisiana's notorious Angola prison-all for a crime he did not commit. That Albert Woodfox survived at all was a feat of extraordinary endurance. That he emerged whole from his odyssey within America's prison and judicial systems is a triumph of the human spirit. While behind bars in his early twenties, Albert was inspired to join the Black Panther Party because of its social commitment and code of living. He was serving a fifty-year sentence in Angola for armed robbery when, on April 17, 1972, a white guard was killed. Albert and another member of the Panthers were accused of the crime and immediately put in solitary confinement. Without a shred of evidence against them, their trial was a sham of justice. Decades passed before Albert was finally released in February 2016. Sustained by the solidarity of two fellow Panthers, Albert turned his anger into activism and resistance. The Angola 3, as they became known, resolved never to be broken by the corruption that effectively held them for decades as political prisoners. Solitary is a clarion call to reform the inhumanity of solitary confinement in the United States and around the world.

Produktdetails
Produktdetails
Autorenporträt
Albert Woodfox was born in 1947 in New Orleans. A committed activist in prison, he remains so today, speaking to a wide array of audiences, including the Innocence Project, Harvard, Yale, and other universities, the National Lawyers Guild, as well as at Amnesty International events in London, Paris, Denmark, Sweden, and Belgium. His book Solitary was a finalist for the Pulitzer Prize and the National Book Award for Nonfiction, and winner of the Stowe Prize and the Louisiana Endowment for the Humanities Book of the Year. It has been published in the UK, Canada, Australia, Spain, Germany, and Brazil. He lives in New Orleans.
Rezensionen
Praise for Solitary: