Regional Politics and the Absent Empire 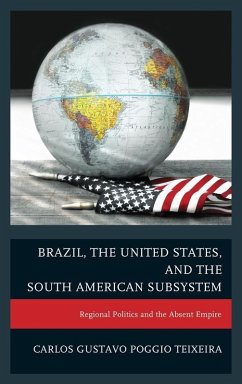 Regional Politics and the Absent Empire

Andere Kunden interessierten sich auch für
Produktbeschreibung
The United States has often acted as an empire in Latin America. Nevertheless, there has been an obvious dissimilarity between U.S. actions in South America and U.S. actions in the rest of Latin America, which is illustrated by the fact that the United States never sent troops to invade a South American country. While geographic distance and strategic considerations may have played a role, they provide at best incomplete explanations for the U.S.'s relative absence south of Panama. The fact that the United States has had a distinct pattern of interactions with South America is thus not captured by the typical concept of Latin America. In , Carlos Gustavo Poggio Teixeira recuperates the virtually neglected literature on regional subsystems. In so doing, Teixeira maintains that researchers of inter-American relations would greatly benefit from a characterization reflecting actual regional realities more than entrenched preconceptions. Such a characterization involves subdividing the Western Hemisphere in two regional subsystems: North and South America. This subdivision allows for uncovering regional dynamics that can help explain the U.S.'s limited interference in South American affairs compared to the rest of Latin America. This book argues that the role of Brazil as a status quo regional power in South America is the key to understanding this phenomenon. Through a historical analysis focusing on specific cases spanning three centuries, this research demonstrates that Brazil, regardless of particular domestic settings, has deliberately affected the calculations of costs and benefits of a more significant US involvement in South America. While in the past Brazil has taken actions that resulted in increasing the benefits of the U.S.'s limited involvement in South America, in more recent times it has sought to increase the costs of a more significant U.S. presence. Teixeira then considers some of the theoretical and political implications of the framework laid out by this research. is a groundbreaking investigation of U.S.-Latin American relations and the politics of imperialism.