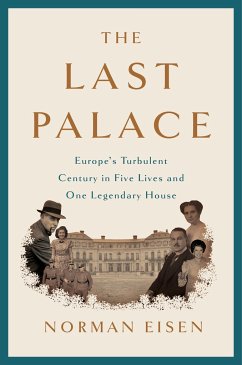 A sweeping yet intimate narrative about the last hundred years of turbulent European history, as seen through one of Mitteleuropa's greatest houses-and the lives of its occupants When Norman Eisen moved into the US ambassador's residence in Prague, returning to the land his mother had fled after the Holocaust, he was startled to discover swastikas hidden beneath the furniture in his new home. These symbols of Nazi Germany were remnants of the residence's forgotten history, and evidence that we never live far from the past. From that discovery unspooled the twisting, captivating tale of four of…mehr

Andere Kunden interessierten sich auch für
Produktbeschreibung
A sweeping yet intimate narrative about the last hundred years of turbulent European history, as seen through one of Mitteleuropa's greatest houses-and the lives of its occupants When Norman Eisen moved into the US ambassador's residence in Prague, returning to the land his mother had fled after the Holocaust, he was startled to discover swastikas hidden beneath the furniture in his new home. These symbols of Nazi Germany were remnants of the residence's forgotten history, and evidence that we never live far from the past. From that discovery unspooled the twisting, captivating tale of four of the remarkable people who had called this palace home. Their story is Europe's, and The Last Palace chronicles the upheavals that transformed the continent over the past century. There was the optimistic Jewish financial baron, Otto Petschek, who built the palace after World War I as a statement of his faith in democracy, only to have that faith shattered; Rudolf Toussaint, the cultured, compromised German general who occupied the palace during World War II, ultimately putting his life at risk to save the house and Prague itself from destruction; Laurence Steinhardt, the first postwar US ambassador whose quixotic struggle to keep the palace out of Communist hands was paired with his pitched efforts to rescue the country from Soviet domination; and Shirley Temple Black, an eyewitness to the crushing of the 1968 Prague Spring by Soviet tanks, who determined to return to Prague and help end totalitarianism-and did just that as US ambassador in 1989. Weaving in the life of Eisen's own mother to demonstrate how those without power and privilege moved through history, The Last Palace tells the dramatic and surprisingly cyclical tale of the triumph of liberal democracy.
Produktdetails
Autorenporträt
Norman Eisen is the author of A Case for the American People: The United States v. Donald J. Trump; Democracy's Defenders; and The Last Palace. He was special counsel to the House Judiciary Committee from 2019 to 2020, including for the impeachment and trial of President Donald Trump. He previously served as ethics czar for President Barack Obama and then as his ambassador to the Czech Republic. Eisen is a senior fellow in Governance Studies at the Brookings Institution. He lives in Washington, D.C., with his family.
Rezensionen
A Publishers Weekly, BookPage, and Pen America Best Book of 2018