There Goes Gravity: A Life in Rock and Roll 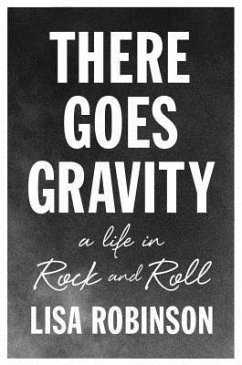 There Goes Gravity: A Life in Rock and Roll

Ms. Robinson seemed to be everywhere in the rock world of the 1970s and 80s, often as the only woman in a roomful of boys.
NYTimes

"Lisa Robinson began reporting at a time when rock journalism 'was in its infancy and mostly populated by boys who had ambitions to become the next Norman Mailer.' Her memories of some of music's biggest legends, from Mick Jagger to Michael Jackson to Lady Gaga (whom she describes as 'a cute girl in her twenties who had really good manners'), animate this book."
NPR.org

As a pioneering music journalist in the 1970s (working for Creem, Hit Parader, et al.), Robinson rarely left the house without a VIP pass dangling from her neck. She shares a lifetime s worth of backstage escapades and intimate insights on rock royalty."
Washington Post Express

As a journalist, it's Robinson's job to get the story without a publicist whispering in her ear or lawyers tapping her on the shoulder or anyone telling her how and what to write. And she's done it so well, that, no matter what she writes, music artists love her. After reading this wickedly hilarious, blunt memoir, you will, too.
USA Today

You ll struggle to name a rock star Lisa Robinson hasn t interviewed over the years.
Time Out New York

Gossipy, witty, and occasionally profound, Robinson writes about music from a very intimate perspective whether on tour with the Rolling Stones in 1975 or eating pasta cooked by Lady Gaga in 2011, Robinson has an uncanny ability to get close to musicians. Boston Globe

The excerpts from her long interviews with, say, John Lennon, are fascinating Plenty of music fans will be more than ready for this circuitous, genial, and opinionated walk on the wild side.
Booklist

Robinson s a lifelong music journalist; think of her memoir as the literary equivalent of a backstage pass. EW

Tough, smart and with a knack for encountering some of music's biggest names at pivotal moments, Robinson tells the the unique story of her career. Rolling Stone

Working mostly from the countless diaries she kept during her travels, There Goes Gravity moves along at a brisk clip, a pulsating bass of Robinson s frankness keeping time throughout. The Riveter

There Goes Gravity is a lot more than a rock music 'tell-all' the author s insight and knowledge of music elevates [the book] from your standard, run-of-the-mill, behind-the-scenes expose into a series of wonderful stories told by someone who, not only, knows of what she speaks, but loves the people, places and talent that have crossed her path for all these years " The Examiner

Her excitement is palpable and will leave you wanting to put your lighter in the air.
Publishers Weekly

Readers should expect several dozen amusing cameos and digressions along the way, though. The focus may be on the artists, but it is Robinson s voice, straight­forward and intimate, that makes this work stand out from the pack. A particularly entertaining rock and roll memoir that will appeal to a wide audience. Highly recommended for music or cultural historians and fans of road diaries. Library Journal

A backstage pass to the greatest circus of the 20th century. Kirkus Reviews

Making a narrow history approachable and captivating to a broad audience is a tall order, but Lisa Robinson proves that she is a master of casting such spells. Bustle

If you care one whit about music and musicians, Gravity is a must-read.
PureWow

[A]n exceptional read Readers feel like they re beside Robinson as she recalls each incident without sparing a detail. She creates vibrant portrayals of characteristics, interactions, reactions, settings, and sounds with her informal yet expertly arranged prose.
PopMatters

An obsessive recorder and note taker, Robinson has distilled her hundreds of hours of interviews with legend after legend into bite sized-stories, through it all successfully negotiating the balancing act between fan and journalist with a circus performer's aplomb, a trick she continues as an editor at Vanity Fair.
Paper Magazine

Robinson s memoir an epic account of her 40 plus years of writing about music is an all access pass to rock and roll history, with interviews of everyone from Mick to Eminem to Kanye Departures

[A] vivid, richly detailed memoir that functions as a de facto history of rock and of an edgier, bygone New York. Jewish Daily Forward

There Goes Gravity offers a magnificent, acute account of style from '70s rock to punk to mainstream pop.
NYMAG, The Cut

A fast, fun read with delectable serving-sized chapters of rock & roll history Lisa Robinson has raised the microphone stand so high for others to aspire to, and for the readers of music journalism today, that only makes for better, deeper interviews. Glide magazine

Much can be learned from Robinson's initiative, demeanor, and journalistic style in There Goes Gravity. Of course, juicy details about the biggest musicians of all time are interesting too. DCist

Now a contributing editor atVanity Fair, music journalist Lisa Robinson has had a career worth reading about. There Goes Gravity tells the story of a girl in the boys club of rock and roll journalism. DAME magazine