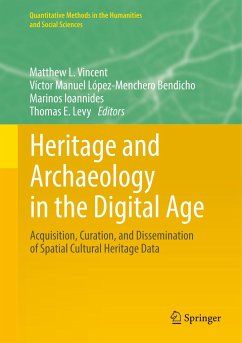 This book examines how computer-based programs can be used to acquire 'big' digital cultural heritage data, curate, and disseminate it over the Internet and in 3D visualization platforms with the ultimate goal of creating long-lasting "digital heritage repositories.' The organization of the book reflects the essence of new technologies applied to cultural heritage and archaeology. Each of these stages bring their own challenges and considerations that need to be dealt with. The authors in each section present case studies and overviews of how each of these aspects might be dealt with. While…mehr