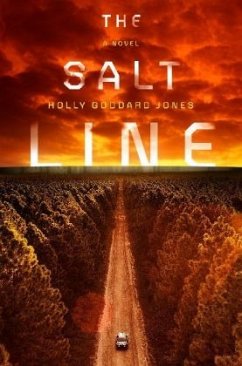 "Great, near-future sci-fi...A propulsive, character-driven thriller...I really love this book."-Kelly Link, author of Get in Trouble and Magic for Beginners
In the spirit of Station Eleven and California, award-winning novelist Holly Goddard Jones offers a literary spin on the dystopian genre with this gripping story of survival and humanity about a group of adrenaline junkies who jump "the Salt Line."
How far will they go for their freedom-once they decide what freedom really means?
In an unspecified future, the United States' borders have receded behind a salt line-a ring of…mehr

In the spirit of Station Eleven and California, award-winning novelist Holly Goddard Jones offers a literary spin on the dystopian genre with this gripping story of survival and humanity about a group of adrenaline junkies who jump "the Salt Line."

How far will they go for their freedom-once they decide what freedom really means?

In an unspecified future, the United States' borders have receded behind a salt line-a ring of scorched earth that protects its citizens from deadly disease-carrying ticks. Those within the zone live safe, if limited, lives in a society controlled by a common fear. Few have any reason to venture out of zone, except for the adrenaline junkies who pay a fortune to tour what's left of nature. Those among the latest expedition include a popstar and his girlfriend, Edie; the tech giant Wes; and Marta; a seemingly simple housewife.

Once out of zone, the group find themselves at the mercy of deadly ticks-and at the center of a murderous plot. They become captives in Ruby City, a community made up of outer-zone survivors determined to protect their hardscrabble existence. As alliances and friendships shift amongst the hostages, Edie, Wes, and Marta must decide how far they are willing to go to get to the right side of the salt line.

Produktdetails
Autorenporträt
Holly Goddard Jones is the author of The Next Time You See Me and Girl Trouble (stories). Her work has appeared in The Best American Mystery Stories, New Stories from the South, Tin House magazine, and elsewhere. She was a recipient of The Fellowship of Southern Writers' Hillsdale Prize for Excellence in Fiction and of a Rona Jaffe Foundation Writers' Award. She earned her M.F.A. from Ohio State University and her B.A. from the University of Kentucky. She teaches creative writing at UNC Greensboro and lives in Greensboro with her husband, Brandon, and their children.
Rezensionen
One of Southern Living Magazine's " Best Southern Books of the Year"
One of I09.com's "Science and Fiction Fantasy Books to Keep on Your Radar This Fall"

"Combining elements of sci-fi, thrillers and speculative fiction, The Salt Line is a page-turner. Ms. Goddard Jones...builds a believable world and generates tension effectively. The plot is action-driven, but an ensemble cast of characters keeps the story rooted in human emotions and motivations."-Pittsburgh Post-Gazette

"The Salt Line's most poignant moments occur when the perceived impenetrability of certain protective barriers is undermined....Jones' masterful use of suspense not only bends the style boundaries of dystopian lit, but it shows that the barriers we all often rely on can break."-Paste Magazine

"A riveting tale of a dystopian future in which the world has been changed by the spread of some truly horrific ticks, and a sensitive, fascinating portrait of the people who have to live there."-Cincinnati CityBeat

"Social commentary and intense thrills rolled into one seamless story. Outwardly an adventure story, this suspenseful novel uses a thrilling premise to examine the fallout of abandoning universal freedoms in order to ensure collective safety."-Publishers Weekly

"The mystery-like structure keeps the reader guessing as Jones switches seamlessly from evocative pastoral descriptions of North Carolina and Tennessee to action-packed scenes of violence....At once dark, disturbing, and highly enjoyable, this is a timely novel bursting with ideas."-Booklist

"Terrifying and bold...A character-driven thriller with shocking plot twists, jaw-dropping revelations and splashes of horror, sci-fi and romance...Jones' unique riff on dystopian fiction as a platform for examining present-day concerns like climate change, immigration, technology and fundamental human rights offers plenty of surprises, but the most disarming aspect of The Salt Line is the unexpected tenderness expressed by its fully fleshed out, complicated characters who are fighting not just for their lives but for their very humanity. More than just a high-octane, speculative survivalist tale, The Salt Line is also a powerful meditation on humanity's fragility and resilience."-BookPage

"A taught tale of survival and social commentary." -Locus Magazine

"A lot like what Golding might have produced had he diverged into a world of arachnids. And, it must be noted, nearly as well examined and executed." -Mountain Times (Western North Carolina)

"Engrossing...The Salt Line is a well-written, literary novel. Making deft use of shifting third-person viewpoints, Jones creates complex and interesting characters....These richly drawn characters and the world in which they struggle provide twists and turns that will draw in any reader brave enough to enter a grim and frightening world with killer ticks."-Greensboro News & Record

"The Salt Line is a 'literary thriller' that manages to fulfill each side of that phrase with admirable vigor. It's both gripping and emotionally resonant, both suspenseful and heartfelt. Holly Goddard Jones has a true storyteller's instinct for suspense, along with a deep gift for empathy. She'll make your heart race as you turn the pages, and then she'll crack it open a little before she's through."-Scott Smith, author of The Ruins and A Simple Plan