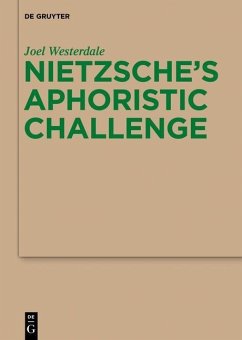 
The "aphoristic form causes difficulty," Nietzsche argued in 1887, for "today this form is not taken seriously enough." Nietzsche's Aphoristic Challenge addresses this continued neglect by examining the role of the aphorism in Nietzsche's writings, the generic traditions in which he writes, the motivations behind his turn to the aphorism, and the reasons for his sustained interest in the form. This literary-philosophical study argues that while the aphorism is the paradigmatic form for Nietzsche's writing, its function shifts as his thought evolves. His turn to the aphorism in Human, All Too Human arises not out of necessity, but from the new freedoms of expression enabled by his critiques of language and his emerging interest in natural science. Yet the model interpretation of an aphorism Nietzsche offers years later in On the Genealogy of Morals tells a different story, revealing more about how the mature Nietzsche wants his earlier works read than how they were actually written. This study argues nevertheless that consistencies emerge in Nietzsche's understanding of the aphorism, and these, perhaps counter-intuitively, are best understood in terms of excess. Recognizing the changes and consistencies in Nietzsche's aphoristic mode helps establish a context that enables the reader to navigate the aphorism books and better answer the challenges they pose.