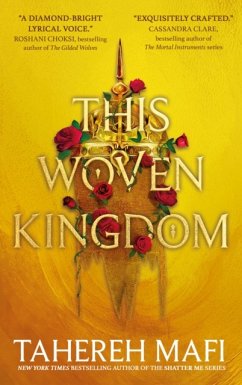 Andere Kunden interessierten sich auch für
Produktbeschreibung
Clashing empires, forbidden romance, and a long-forgotten queen destined to save her people-New York Times bestselling author Tahereh Mafi's first novel in this epic, romantic fantasy series inspired by Persian mythology.
Produktdetails
Produktdetails
Autorenporträt
Tahereh Mafi is the National Book Award nominated and New York Times and USA Today bestselling author of An Emotion of Great Delight, the This Woven Kingdom series, the Shatter Me series, A Very Large Expanse of Sea, Whichwood, and Furthermore. You can find her on Instagram at @tahereh or on her website, www.taherehmafi.com.
Rezensionen
"In a tale as exquisitely crafted as one of Alizeh's own garments, Mafi weaves a spell of destiny and danger, forbidden love and courtly intrigue, magic and revolution." - Cassandra Clare, #1 New York Times bestselling author of The Last Hours

"This Woven Kingdom is an exquisite fantasy. Rich with clever prose, delicious twists, and breathtaking world building. Prepare to be destroyed-this one will wrench at your heart and make it pound, and in the end it will leave you entirely speechless."
- Stephanie Garber, #1 New York Times bestselling author of the Caraval series

"This story is so magical and transportive that I fully expected the book would know the moment I'd finished - within hours, no less - and promptly unravel into a pile of jewels and silks in my hands. Mafi's diamond-bright lyrical voice weaves a tale that is gilded in magic, laced with subterfuge, adorned with the brocade of a tortuous romance, and richly embroidered with Persian mythology. I cannot wait for more." - Roshani Chokshi, New York Times bestselling author of The Gilded Wolves


"I've been longing to read a story inspired by The Shahnameh, and This Woven Kingdom captivated me with its deft worldbuilding and searing romance. Alizeh's quiet strength unfurls against a darkly magical backdrop. This book is a glittering jewel, complete with razor-sharp edges."
- Renée Ahdieh, #1 New York Times bestselling author of The Wrath & the Dawn series

"Forbidden romance steams up the pages of this Persian mythology-inspired fantasy series opener[, in] a luxurious, saffron-scented world, where devils whisper unwelcome prophecies and princes fall in love with ice-eyed Jinn. Hopeless romantics will relish the euphoric agony of anticipation as they watch these fated lovers sort through their feelings. Like an intricate Islamic flower mural, Mafi's story expands deliberately, each small revelation rising from the one before, delivering deeply satisfying epiphanies. The wait for a return ticket to this exquisite kingdom is made bearable only by flipping to the front and repeating your first visit." - New York Times Book Review

"[An] illustrious tale of magic, court intrigue, and romance. Captivating readers from the very first chapter... A magnetic series opener that will delight fans of Mafi's previous series."
- Booklist

"Drawn from Persian mythology and Islamic texts, this epic fantasy is brilliantly structured to maximize readers' emotional buy-in. Eloquent prose brings vivid immediacy to each scene. Although Alizeh and Kamran are only together a handful of times, Mafi gives full due to their steamy, forbidden attraction. [The] ending ensures a breathlessly awaited sequel." - Bulletin of the Center for Children's Books

"In a heart-wrenching novel based in Islamic texts and Persian poem the Shahnameh, Mafi complements rich worldbuilding with lushly descriptive, sensorial prose that inspires the novel's mythological backdrop, against which plays out an emotional plot, and a tortured romance, layered with court intrigue."
- Publishers Weekly

"Mafi's intricate worldbuilding sets high stakes for the trilogy. The setting grapples with themes of discrimination and equity versus equality... Mafi's slow-build story is braiding a complex plot that promises a payoff in the sequels."
- School Library Journal

"The first chapter of what's set to be an epic trilogy." - Popsugar

"Forbidden romance steams up the pages of this Persian mythology-inspired fantasy series opener. . . The wait for a return ticket to this exquisite kingdom is made bearable only by flipping to the front and repeating your first visit." - New York Times

"An enchanting and lush YA fantasy, This Woven Kingdom is a thought-provoking and atmospheric read that is sure to keep readers quickly turning pages to the shocking end." - YA Book Central

"Masterfully incorporates influences from Persian and Muslim history, culture and mythology.... Tightly paced, with a rollicking set of twists and revelations and a chaotic climax that leads straight to a whopping cliffhanger of an ending, This Woven Kingdom is an exceptional fantasy that blends its various influences to addictive effect."
- BookPage

PRAISE FOR An Emotion of Great Delight: "Gorgeous and poetic, Mafi is unflinching in her rendering of pain and brutal truths, but also succeeds in weaving a tale that is brimming with heart and honest hope. This is a book I wish I'd had when I was fourteen. I'm so glad young readers will have it now. A truly special story." - Jasmine Warga, New York Times bestselling and Newbery Honor-winning author of Other Words for Home

"Tahereh Mafi has written a timely, compelling novel about love and family and the remarkably complex nature of religion and faith. An Emotion of Great Delight is as profound as it is beautiful." - Matt de la Peña, New York Times and Newbery Medal winning author of The Last Stop on Market Street

"Mafi confronts issues of mental health, suicidality, racism, and self-love in ways that will leave readers reacting viscerally and powerfully. Reading this novel is like being dropped straight into the everyday lives of a Muslim family in post-9/11 America. A simply real story, devoid of clichés, that will leave an indelible mark."
- Kirkus Reviews (starred review)

"Mafi follows her National Book Award-longlisted A Very Large Expanse of Sea (2018) with another contemporary young adult novel of striking emotional intensity. Complex and introspective Shadi details her experiences with the specific challenges of Islamaphobia and with more general issues. With masterfully compelling prose, this surprises and ensnares, leading readers to an inevitable but gripping climax. Though there's a feverous feeling throughout the book, there's also formidable nuance in Shadi's paradoxical and contradictory thought patterns, which add even more to the blunt realism. Emotional implications of great magnitude and stakes that could not feel higher. A bluntly powerful read that shouldn't be missed."
- ALA Booklist (starred review)

"Mafi's prose is compelling and unsentimental, giving voice to the universal angst common among teenagers. She handles the timely issues of race and discrimination with skill, highlighting the inaccuracies so often ascribed to individuals of the Muslim faith. Her well-developed characters jump off the page, especially during romantic moments. An emotional, important look at an American Muslim teen's experience."
- School Library Journal (starred review)

"Mafi clearly and movingly illustrates how grief can escalate uncontrollably and seep into every facet of life."
- Publishers Weekly

"Mafi introduces some potent issues around whether passive resistance or confrontation is the better community strategy, and scenes of anti-Muslim aggression are brief but impactful."
- Bulletin of the Center for Children's Books

"Mafi returns with another lyrical contemporary novel. An aching, emotional story that touches on various internal struggles of being a child of immigrants."
- Buzzfeed

PRAISE FOR A Very Large Expanse of Sea: "A raw yet astoundingly elegant examination of identity, loneliness and family that is unflinching in its honesty and power. Tahereh Mafi holds nothing back-and the reader is better for it." - Sabaa Tahir, #1 New York Times bestselling author of the Ember in the Ashes series

"A Very Large Expanse of Sea reads like a beautiful heart-one that shines and aches and yearns, and above all else, one that loves fiercely against all odds. Years from now, you will remember exactly where you were and what you were doing when you experienced this. A transcendent story about truth, love, and finding joy." - Marie Lu, #1 New York Times bestselling author of the Warcross series

"This is a gorgeous book. It's tender and fierce, beautiful even as it depicts some ugly truths. Tahereh's prose is passionate and honest, unsentimental and big-hearted. The very best books move you to reconsider the world around you, and this is one of those. I truly loved it." - Nicola Yoon, #1 New York Times bestselling author of Everything, Everything and The Sun is Also a Star

"Tahereh Mafi, known for her fantasy and dystopian novels, proves a master of the contemporary realistic novel, as well, with A Very Large Expanse of Sea, longlisted for a National Book Award. Shirin's first-person voice bristles with anger, wit and pain. Even as the fraught love story drives the short chapters to a surprising close, Mafi weaves in moments of camaraderie and joy." - Washington Post

"Mafi tackles the life of an American Muslim teenager in the wake of 9/11 in this visceral, honest novel. Shirin's sharp, raw voice narrates, and her captivating story opens a window onto a different narrative than the one typically dominating the airwaves after 9/11. Mafi excels at highlighting the relationships between her characters. Rich characters, incisive writing, and a powerful story will thrill readers." - ALA Booklist (starred review)

"[Mafi's] writing is nuanced and smart. Shirin and Ocean's interactions are palpable, and the discussions and exploration of what it means to be a Muslim in politically charged America will resonate with many teens and will be enlightening for some." - School Library Journal (starred review)

"Mafi gives vivid voice to an underrepresented audience in this story. The teens' rich personalities, desires, powerful emotions and struggles come together to form a memorable work. An outstanding contemporary novel, A Very Large Expanse of Sea is a realistic love story that provides a much-needed perspective." - Shelf Awareness (starred review)

"This gripping political romance takes readers into the life of a young Muslim woman trying to navigate high school with the entire world attacking her right to her body and her faith. A moving coming-of-age narrative about the viciousness of Islamophobia and the unwavering power of love in post-9/11 America." - Kirkus Reviews (starred review)

"A contemporary love story with a heartbreakingly realistic portrait of one post-9/11 Muslim life in the United States. Mafi openly addresses many common misconceptions about Islam and what it means to be a woman of color in the face of racism, showing how differences can be applauded, not feared." - Publishers Weekly

"This story holds a mirror up to the ugly reality of religious bigotry. That disturbing truth, however, is offset by a portrait of a strong Muslim teen girl who defies stereotypes on multiple levels. Shirin insists on her right to approach life on her own clear-eyed terms, granting compassion to the deserving and an education to those who need it." - Bulletin of the Center for Children's Books

"Cerebral, impassioned, and zeitgeisty... Mafi's sincerity stands out in full force in her craftsmanship. A Very Large Expanse of Sea is timeless in its themes and will continue to affect readers, months after they've closed the book." - NPR

"A Very Large Expanse of Sea is the love story you need to read next." - Teen Vogue

"Mafi seamlessly works in questions of identity, race and Islamophobia [and] taps into the fierceness and passion of first love. The novel's bittersweet ending will ring true for most, and break the hearts of many." - New York Times Book Review

"Tahereh Mafi soars to new heights with A Very Large Expanse Of Sea. A singular new novel from one of YA's brightest voices." - Entertainment Weekly

"A masterfully constructed novel. The characters are beautifully developed and authentic. [Shirin's] voice is fierce, funny, vulnerable, and honest. Mafi's novel challenges readers to ponder their own beliefs, assumptions, and actions. And, also reminds us of the captivating bliss of first love." - Nerdy Book Club

PRAISE FOR THE Shatter Me SERIES: "Written with precision and a sense of urgency, each chapter a strobe light-like moment in the lives of the teens trying to save their world. The prose moves readers swiftly from crisis to crisis." - Booklist Online