Book Three of The Century Trilogy 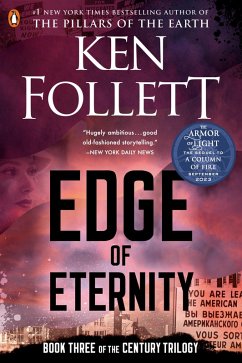 Book Three of The Century Trilogy

Ken Follett's extraordinary historical epic, the Century Trilogy, reaches its sweeping, passionate conclusion. In Fall of Giants and Winter of the World, Ken Follett followed the fortunes of five international families-American, German, Russian, English, and Welsh-as they made their way through the twentieth century. Now they come to one of the most tumultuous eras of all: the 1960s through the 1980s, from civil rights, assassinations, mass political movements, and Vietnam to the Berlin Wall, the Cuban Missile Crisis, presidential impeachment, revolution-and rock and roll. East German teacher…mehr

eBooks
Zum Shop
Produktbeschreibung
Ken Follett's extraordinary historical epic, the Century Trilogy, reaches its sweeping, passionate conclusion. In Fall of Giants and Winter of the World, Ken Follett followed the fortunes of five international families-American, German, Russian, English, and Welsh-as they made their way through the twentieth century. Now they come to one of the most tumultuous eras of all: the 1960s through the 1980s, from civil rights, assassinations, mass political movements, and Vietnam to the Berlin Wall, the Cuban Missile Crisis, presidential impeachment, revolution-and rock and roll. East German teacher Rebecca Hoffmann discovers she's been spied on by the Stasi for years and commits an impulsive act that will affect her family for the rest of their lives. . . . George Jakes, the child of a mixed-race couple, bypasses a corporate law career to join Robert F. Kennedy's Justice Department and finds himself in the middle of not only the seminal events of the civil rights battle but a much more personal battle of his own. . . . Cameron Dewar, the grandson of a senator, jumps at the chance to do some official and unofficial espionage for a cause he believes in, only to discover that the world is a much more dangerous place than he'd imagined. . . . Dimka Dvorkin, a young aide to Nikita Khrushchev, becomes an agent both for good and for ill as the United States and the Soviet Union race to the brink of nuclear war, while his twin sister, Tanya, carves out a role that will take her from Moscow to Cuba to Prague to Warsaw-and into history. Look out for Ken's newest book, A Column of Fire, available now.

Produktdetails
Autorenporträt
Ken Follett is one of the world's best-loved authors, selling more than 160 million copies of his thirty books. Follett's first bestseller was Eye of the Needle, a spy story set in the Second World War. In 1989 The Pillars of the Earth was published, and has since become the author's most successful novel. It reached number one on bestseller lists around the world and was an Oprah's Book Club pick. Its sequels, World Without End and A Column of Fire, proved equally popular, and the Kingsbridge series has sold 38 million copies worldwide. Follett lives in Hertfordshire, England, with his wife Barbara. Between them they have five children, six grandchildren, and three Labradors. 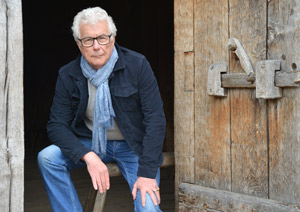 "[Follett] is a commanding storyteller who has taken on an impossibly large task and accomplished it with passion, intelligence, and skill. Like its predecessors, Edge of Eternity is a solid, rigorously researched work of popular fiction. It's an honest entertainment that brings back vivid, sometimes painful, memories of the not-too-distant past."
The Washington Post

"Edge of Eternity is as compulsively readable a mighty page-turner as its two predecessors."
The Seattle Times

"Hugely ambitious, the trilogy serves as a massive history lesson as well as an example of good, old-fashioned storytelling."
The New York Daily News

"Follett never forgets he is telling a story. The historical events are the backdrop but the characters are the focal point. Good storytellers know this and Follett is an excellent one."
The Huffington Post

"Worth the wait. . . . Once again, Follett has written pitch-perfect popular fiction that readers will devour."
Library Journal (starred review)

"A glorious conclusion to a remarkable trilogy that is wonderful, exhilarating reading for all ages. Fine, fine historical fiction."
Historical Novel Society

"Follett does an outstanding job of interweaving and personalizing complicated narratives set on a multicultural stage."
Booklist

"Follett . . . knows how to turn in a robust yarn without too much slack . . . a well-written entertainment."
Kirkus Reviews

Praise for Winter of the World

"This book is truly epic. . . . The reader will probably wish there were a thousand more pages."
The Huffington Post

"Some of the biggest-picture fiction being written today."
The Seattle Times

"Follett's real gifts are those of a natural storyteller: swift, cinematic pacing, the ability to juggle multiple narratives coherently, and an eye for the telling detail . . . a consistently compelling portrait of a world in crisis."
The Washington Post

"Follett is so good at plotting a story, even one that takes on such a complex topic as the World War II era. That's what makes Winter of the World so hard to put down. You want to know what happens next."
The Associated Press

"The man tells a story so well. . . . Follett can make things glow with some beautifully written episodes. . . . If you read Volume I, you'll have to read Volume II. And once you read Volume II, you'll be committed to reading Volume III. See you in a couple of years."
St. Louis Post-Dispatch

"Clips along at a brisk pace. . . . He knows how to keep the pages turning and how to make the reader feel a kinship with the characters' struggles. . . . No matter the ultimate destination, readers can expect to savor the journey and agonize while waiting for the final book to arrive."
The Christian Science Monitor

Praise for Fall of Giants

"Follett is masterly in conveying so much drama and historical information so vividly . . . grippingly told."
The New York Times Book Review

"Fall of Giants: Follett at his finest. . . . [a] sweeping epic that will thrill his fans for hours on end."
The Huffington Post

"Follett conjures the winds of war."
The Washington Post

"A good read. . . . It s a book that will suck you in, consume you for days or weeks . . . then let you out the other side both entertained and educated."
USA Today

"Follett entwines fiction and factual events well. . . . This is a dark novel, motivated by an unsparing view of human nature and a clear-eyed scrutiny of an ideal peace. It is not the least of Follett's feats that the reader finishes this near thousand-page book intrigued and wanting more."
Chicago Sun-Times

"Follett once again creates a world at once familiar and fantastic. . . . A guiltless pleasure, the book is impossible to put down. . . . Empires fall. Heroes rise. Love conquers. After going through a war with these characters, you're left hoping that Follett gets moving with the next giant installment."
Time Out

"Grand in scope, scale, and story."
The Associated Press