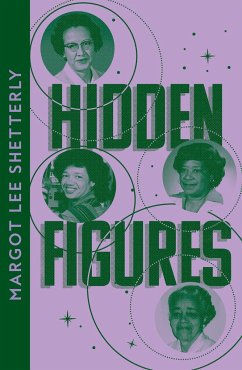 Andere Kunden interessierten sich auch für
Produktbeschreibung
NOW A MAJOR MOTION PICTUREOscar Nominated For Best Picture and Best Adapted Screenplay Set amid the civil rights movement, the never-before-told true story of NASA's African-American female mathematicians who played a crucial role in America's space program.
Produktdetails
Produktdetails
Autorenporträt
Margot Lee Shetterly is an independent scholar and an Alfred P. Sloan Foundation award recipient, currently at work on The Human Computer Project, a digital archive of the stories of NASA's female Human Computers. She is one of the founders of Inside Mexico Magazine, an English-language magazine for Mexico's expat population, and in her former lives worked as an Internet executive and an investment banker. She splits her time between Hampton, Virginia and Valle de Bravo, Mexico.
Rezensionen
" In Shetterly and Conkling's approachable text, the reader is introduced to four hidden figures and given a broad look at the United States' history of segregation and fight for civil rights. Freeman's illustrations are striking, featuring bold, fully saturated colors. Feels as fresh as the original. Delightful and informative." Shelf Awareness
A TIME Magazine Top 10 Nonfiction Book of 2016

'Clearly fueled by pride and admiration, a tender account of genuine transcendence and camaraderie.
The story warmly conveys the dignity and refinements of these women' New York Times Book Review

'Much as Tom Wolfe did in 'The Right Stuff', Shetterly moves gracefully between the women's lives and the broader sweep of history ... Shetterly blends impressive research with an enormous amount of heart in telling these stories ... Genuinely inspiring book' Boston Globe

'Shetterly's highly recommended work offers up a crucial history that had previously and unforgivably been lost. We'd do well to put this book into the hands of young women who have long since been told that there's no room for them at the scientific table' Library Journal

'This an is incredibly powerful and complex story, and Shetterly has it down cold. The breadth of her well-documented research is immense, and her narrative compels on every level. The timing of this revelatory book could not be better, and book clubs will adore it' Booklist

'Meticulous ... the depth and detail that are the book's strength make it an effective, fact-based rudder with which would-be scientists and their allies can stabilise their flights of fancy' Seattle Times