Molecular And Cellular Approaches To The Control Of Proliferation And Differentiation (eBook, PDF) 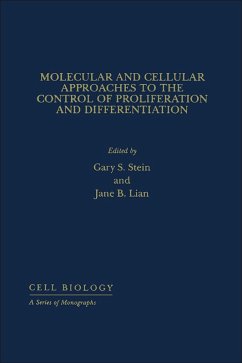 Molecular And Cellular Approaches To The Control Of Proliferation And Differentiation (eBook, PDF)

Andere Kunden interessierten sich auch für
Produktbeschreibung
Molecular and Cellular Approaches to the Control of Proliferation and Differentiation focuses on molecular and cellular approaches used to control cell proliferation and differentiation. This book discusses the basic mechanisms involved in the regulation of cell growth, emphasizing the coupling of proliferation and the progressive expression of several specific cellular phenotypes.
This text is organized into three sections encompassing 12 chapters and begins with an introduction to cell proliferation and how it is regulated by growth factors and nuclear protooncogenes in cell proliferation. The book then discusses mitosis and its investigation by means of the cell biological, genetic, biochemical, and immunological approaches, along with the model for mitotic regulation. The next chapters examine the manner in which cell structure is involved in the selective expression of genes associated with proliferation and differentiation and, how gene expression in response modulates both intracellular (nuclear matrix and cytoskeleton) and extracellular (extracellular matrix) architecture. The extent to which common signaling mechanisms and regulatory events are operative in the control of proliferation and differentiation is also addressed. The book concludes by analyzing the involvement of histone modifications in the condensation of mitotic chromosomes.
This book is of interest to advanced undergraduate students, as well as to graduate students and researchers in genetics, cell biology, biological chemistry, microbiology, and immunology.