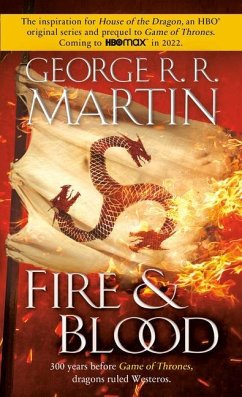 #1 NEW YORK TIMES BESTSELLER • The thrilling history of the Targaryens comes to life in this masterly work, the inspiration for HBO's upcoming Game of Thrones prequel series House of the Dragon "The thrill of Fire & Blood is the thrill of all Martin's fantasy work: familiar myths debunked, the whole trope table flipped."-Entertainment Weekly Centuries before the events of A Game of Thrones, House Targaryen-the only family of dragonlords to survive the Doom of Valyria-took up residence on Dragonstone. Fire & Blood begins their tale with the legendary Aegon the Conqueror, creator of the Iron…mehr

Andere Kunden interessierten sich auch für
Produktbeschreibung
#1 NEW YORK TIMES BESTSELLER • The thrilling history of the Targaryens comes to life in this masterly work, the inspiration for HBO's upcoming Game of Thrones prequel series House of the Dragon "The thrill of Fire & Blood is the thrill of all Martin's fantasy work: familiar myths debunked, the whole trope table flipped."-Entertainment Weekly Centuries before the events of A Game of Thrones, House Targaryen-the only family of dragonlords to survive the Doom of Valyria-took up residence on Dragonstone. Fire & Blood begins their tale with the legendary Aegon the Conqueror, creator of the Iron Throne, and goes on to recount the generations of Targaryens who fought to hold that iconic seat, all the way up to the civil war that nearly tore their dynasty apart. What really happened during the Dance of the Dragons? Why was it so deadly to visit Valyria after the Doom? What were Maegor the Cruel's worst crimes? What was it like in Westeros when dragons ruled the skies? These are but a few of the questions answered in this essential chronicle, as related by a learned maester of the Citadel and featuring more than eighty all-new black-and-white illustrations by artist Doug Wheatley-including five all-new illustrations exclusive to this edition. Readers have glimpsed small parts of this narrative in such volumes as The World of Ice & Fire, but now, for the first time, the full tapestry of Targaryen history is revealed. With all the scope and grandeur of Gibbon's The History of the Decline and Fall of the Roman Empire, Fire & Blood is the the first volume of the definitive two-part history of the Targaryens, giving readers a whole new appreciation for the dynamic, often bloody, and always fascinating history of Westeros. Praise for Fire & Blood "A masterpiece of popular historical fiction."-The Sunday Times "The saga is a rich and dark one, full of both the title's promised elements. . . . It's hard not to thrill to the descriptions of dragons engaging in airborne combat, or the dilemma of whether defeated rulers should 'bend the knee,' 'take the black' and join the Night's Watch, or simply meet an inventive and horrible end."-The Guardian
Produktdetails
Autorenporträt
George R. R. Martin is the #1 New York Times bestselling author of many novels, including those of the acclaimed series A Song of Ice and Fire-A Game of Thrones, A Clash of Kings, A Storm of Swords, A Feast for Crows, and A Dance with Dragons-as well as Tuf Voyaging, Fevre Dream, The Armageddon Rag, Dying of the Light, Windhaven (with Lisa Tuttle), and Dreamsongs Volumes I and II. He is also the creator of The Lands of Ice and Fire, a collection of maps featuring original artwork from illustrator and cartographer Jonathan Roberts, and The World of Ice & Fire, with Elio M. García, Jr., and Linda Antonsson. As a writer-producer, he has worked on The Twilight Zone, Beauty and the Beast, and various feature films and pilots that were never made. He lives with the lovely Parris in Santa Fe, New Mexico. Doug Wheatley is a comic book artist, concept designer, and illustrator who has worked on such properties and characters as Star Wars, Aliens, Superman, The Incredible Hulk, and Conan the Barbarian, to name just a few. Wheatley was the artist on the comic book adaptation of the film Star Wars: Episode III: Revenge of the Sith and contributed illustrations to The World of Ice & Fire. 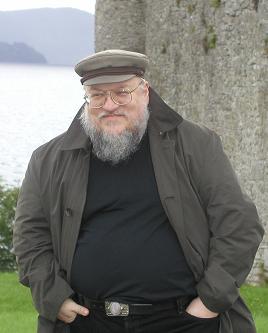 © privat
Rezensionen
I love it so much. Fire & Blood is Martin Unbound . . . and I couldn t put it down. . . . There s an addictive quality to the prose that s outright gossipy. . . . The obvious comparison here is J.R.R. Tolkien s The Silmarillion. . . . Writing centuries after the events he s describing, the Gyldayn voice complicates this game of thrones with a clash of perspectives and a storm of debatable facts. . . . Heavy stuff, but Fire & Blood flies. Entertainment Weekly

A brilliant book . . . vivid, memorable and personal. The Times

Lean and efficient and slyly seductive and instructive . . . The text is filled with such a wealth of incident and so many colorful characters. Locus

The overall narrative of the book is wonderfully fluid. . . . Fire & Blood was a great surprise to me. I found myself becoming deeply emotionally invested in the Targaryens, thrilling when they achieved great victories and lamenting when they succumbed to their more idiotic desires. (And they have a lot of idiotic desires.) This book feels like A Song of Ice and Fire. And you know how I know? Because I want the next book right away. Tordotcom

[There are] treasures hidden in this new Targaryen history. Vanity Fair

The world of ice and fire only gets more fascinating the more we learn about it. Mashable

Martin is still a powerfully gifted, inventive writer. . . . [Fire & Blood] has hundreds of fascinating anecdotes, ranging from the cruel fate of a jester named Tom Turnip to a dragon that, tellingly, refuses to venture beyond the Wall. . . . Fire & Blood is a lavish object, with charts, family trees, and stunning illustrations by comic book artist Doug Wheatley. . . . In this sense it fits into a venerable tradition, from J.R.R. Tolkien in his Silmarillion to Diana Gabaldon in her companion to the Outlander series. USA Today

[Fire & Blood] explores the dragon-fueled secrets upon which the current saga is built. Hollywood Reporter

Martin has done it again. . . . [Fire & Blood is] a beautiful weaving of the wars, marriages, deaths, dragons, and politics that shape the world Martin has created, leaving the reader feeling like this is a true history rather than a piece of fantasy. This is a masterpiece of world-building. . . . Beyond Martin s legions of fans, anyone with a taste for richly, even obsessively detailed historical fiction or fantasy about royalty will enjoy this extraordinary work. Booklist (starred review)…mehr
Kundenbewertungen
Schreiben Sie eine Kundenbewertung zu diesem Produkt und gewinnen Sie mit etwas Glück einen 15,- EUR bücher.de–Gutschein!
Bewertung schreiben Bewertung schreiben
Mehr zum Thema