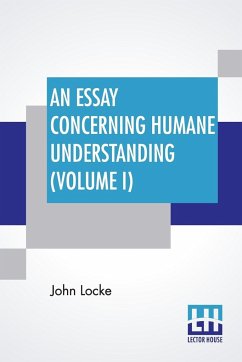 This book is a result of an effort made by us towards making a contribution to the preservation and repair of original classic literature. In an attempt to preserve, improve and recreate the original content, we have worked towards: 1. Type-setting & Reformatting: The complete work has been re-designed via professional layout, formatting and type-setting tools to re-create the same edition with rich typography, graphics, high quality images, and table elements, giving our readers the feel of holding a 'fresh and newly' reprinted and/or revised edition, as opposed to other scanned & printed…mehr

Andere Kunden interessierten sich auch für
Produktbeschreibung
This book is a result of an effort made by us towards making a contribution to the preservation and repair of original classic literature. In an attempt to preserve, improve and recreate the original content, we have worked towards: 1. Type-setting & Reformatting: The complete work has been re-designed via professional layout, formatting and type-setting tools to re-create the same edition with rich typography, graphics, high quality images, and table elements, giving our readers the feel of holding a 'fresh and newly' reprinted and/or revised edition, as opposed to other scanned & printed (Optical Character Recognition - OCR) reproductions. 2. Correction of imperfections: As the work was re-created from the scratch, therefore, it was vetted to rectify certain conventional norms with regard to typographical mistakes, hyphenations, punctuations, blurred images, missing content/pages, and/or other related subject matters, upon our consideration. Every attempt was made to rectify the imperfections related to omitted constructs in the original edition via other references. However, a few of such imperfections which could not be rectified due to intentional\unintentional omission of content in the original edition, were inherited and preserved from the original work to maintain the authenticity and construct, relevant to the work. We believe that this work holds historical, cultural and/or intellectual importance in the literary works community, therefore despite the oddities, we accounted the work for print as a part of our continuing effort towards preservation of literary work and our contribution towards the development of the society as a whole, driven by our beliefs. We are grateful to our readers for putting their faith in us and accepting our imperfections with regard to preservation of the historical content. HAPPY READING!
Produktdetails
Autorenporträt
John Locke FRS (/l¿k/; 29 August 1632 - 28 October 1704) was an English philosopher and physician, widely regarded as one of the most influential of Enlightenment thinkers and commonly known as the "Father of Liberalism" Considered one of the first of the British empiricists, following the tradition of Sir Francis Bacon, he is equally important to social contract theory. His work greatly affected the development of epistemology and political philosophy. His writings influenced Voltaire and Jean-Jacques Rousseau, many Scottish Enlightenment thinkers, as well as the American revolutionaries. His contributions to classical republicanism and liberal theory are reflected in the United States Declaration of Independence.[14] Locke's theory of mind is often cited as the origin of modern conceptions of identity and the self, figuring prominently in the work of later philosophers such as David Hume, Rousseau, and Immanuel Kant. Locke was the first to define the self through a continuity of consciousness. He postulated that, at birth, the mind was a blank slate or tabula rasa. Contrary to Cartesian philosophy based on pre-existing concepts, he maintained that we are born without innate ideas, and that knowledge is instead determined only by experience derived from sense perception.[15] This is now known as empiricism. An example of Locke's belief in empiricism can be seen in his quote, "whatever I write, as soon as I discover it not to be true, my hand shall be the forwardest to throw it into the fire." This shows the ideology of science in his observations in that something must be capable of being tested repeatedly and that nothing is exempt from being disproven. Challenging the work of others, Locke is said to have established the method of introspection, or observing the emotions and behaviours of one's self Locke's father, also called John, was an attorney who served as clerk to the Justices of the Peace in Chew Magna[17] and as a captain of cavalry for the Parliamentarian forces during the early part of the English Civil War. His mother was Agnes Keene. Both parents were Puritans. Locke was born on 29 August 1632, in a small thatched cottage by the church in Wrington, Somerset, about 12 miles from Bristol. He was baptised the same day. Soon after Locke's birth, the family moved to the market town of Pensford, about seven miles south of Bristol, where Locke grew up in a rural Tudor house in Belluton. In 1647, Locke was sent to the prestigious Westminster School in London under the sponsorship of Alexander Popham, a member of Parliament and his father's former commander. After completing studies there, he was admitted to Christ Church, Oxford, in the autumn of 1652 at the age of twenty. The dean of the college at the time was John Owen, vice-chancellor of the university. Although a capable student, Locke was irritated by the undergraduate curriculum of the time. He found the works of modern philosophers, such as René Descartes, more interesting than the classical material taught at the university. Through his friend Richard Lower, whom he knew from the Westminster School, Locke was introduced to medicine and the experimental philosophy being pursued at other universities and in the Royal Society, of which he eventually became a member.
Kundenbewertungen
Schreiben Sie eine Kundenbewertung zu diesem Produkt und gewinnen Sie mit etwas Glück einen 15,- EUR bücher.de–Gutschein!
Bewertung schreiben Bewertung schreiben