Handbook of Signal Processing in Acoustics 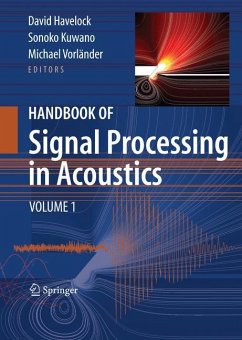 Handbook of Signal Processing in Acoustics

The Handbook of Signal Processing in Acoustics brings together a wide range of perspectives from over 100 authors to reveal the interdisciplinary nature of the subject. It brings the key issues from both acoustics and signal processing into perspective and is a unique resource for experts and practitioners alike to find new ideas and techniques within the diversity of signal processing in acoustics.…mehr

Andere Kunden interessierten sich auch für
Produktbeschreibung
The Handbook of Signal Processing in Acoustics brings together a wide range of perspectives from over 100 authors to reveal the interdisciplinary nature of the subject. It brings the key issues from both acoustics and signal processing into perspective and is a unique resource for experts and practitioners alike to find new ideas and techniques within the diversity of signal processing in acoustics.

Produktdetails
Autorenporträt
David Havelock studied Mathematics and Physics as an undergraduate at Carleton University and obtained his M.Sc in Mathematics at the University of Bristish Columbia. After a period of employment in the areas of seismology and then submarine detection, he joined the Division of Physics at the National Research Council and completed his Ph.D. in Systems Engineering at Carleton University. While there, he has worked in Photogrammetric, Computer Imaging, and (since 1989) Acoustics. While in the Acoustics and Signal Processing Group of the Institute for Microstructural Sciences at the NRC, his main areas of research have been microphone arrays and outdoor sound propagation. He is a fellow of the ASA, past Chair and founding member of its Technical Committee on Signal Processing in Acoustics and was Technical Program Chair for the joint ASA, EAA, DEGA meeting in Berlin, 1999. He is married and has two wonderful daughters. Sonoko Kuwano was born on 19 December 1944 in Japan. She is a Professor of the Laboratory of Environmental Psychology, Graduate School of Human Sciences, Osaka University. She is also a Professor of the Department of Environmental Engineering, Graduate School of Engineering, Osaka University. She graduated from Osaka University with a B.A. degree in Psychology in 1967, and received a Ph.D. in Engineering in 1983 from the University of Tokyo. Her interests are psychological evaluation of environmental noise, cross-cultural study of noise problems, evaluation of sound quality of machinery noise and perception of non-steady state sounds. She was a guest researcher of the Institute of Electroacoustics (Institute of Man-Machine Communication) at the Technical University of Munich in 1985, 1988, 1990, 1993, 1995 and 1997. She is a member of Board of International Commission for Acoustics and a fellow of the Acoustical Society of America. She was the President of the Acoustical Society of Japan (ASJ), the Vice-President of INCE/Japan and the President of Japanese Society for Music Perception and Cognition. She was a co-editor of Handbook of Ergonomics published in 2003, a member of the editorial board of Dictionary of Acoustics edited by ASJ and the editor of the proceedings of many international congresses such as Inter-noise 94 and the third ASA and ASJ Joint Meeting. She has been a member of many committees on environmental problems in central or local governments in Japan, such as the Ministry of the Environment, the Ministry of Land, Infrastructure and Transport, Osaka Prefecture, etc. She won a Sato Paper Prize of ASJ in 1983 and 1987. Michael Vorländer is Professor at RWTH Aachen University, Germany. After university education in physics and doctor degree (Aachen, 1989 with a thesis in room acoustical computer simulation) he worked in various fields of acoustics at the PTB Braunschweig, the National Laboratory for Physics and Technology. First research activities were focused on psychoacoustics and electroacoustics. In 1991 he became head of the PTB laboratory of room and building acoustics. In 1995 he finished the qualification as university lecturer (habilitation) with a thesis on reciprocity calibration of microphones in reverberation chambers. In 1996 he accepted an offer from RWTH Aachen University for a chair and Director of the Institute of Technical Acoustics. Michael Vorländer is member of the German Acoustical Society, DEGA, of the German Physical Society, DPG, and fellow of the Acoustical Society of America, ASA. He is actively involved in the European Acoustics Association, EAA, as President of the term 2004 âEUR" 2007 and Vice-President in the term 2007-2010. Also he served in several positions as conference chairs such as the General Co-chair of Acoustics08, the 2nd joint meeting of ASA and EAA in Paris. His main interests are virtual acoustics (auralization), architectural acoustics, binaural technology and acoustic measurements. Michael Vorländer is married and has three sons.
Inhaltsangabe
1. Acoustical oceanography Models for Propagation Codes Transducer Arrays: structure, data acquisition, signal generation, calibration Sonar MFP Tomography Other Inverse Techniques Signal and Noise Characteristics 2. Active Noise Control Principles of adaptive techniques Plant modeling Sound/vibration field sensing Actuator characteristics and requirements Performance limitations Multi-channel systems Performance and complexity 3. Animal bioacoustics Recording and monitoring systems Models of echolocation Hearing performance and modelling Characteristics of calls Stimuli generation Locating and tracking Archives and Databases of signals 4. Architectural acoustics Room models Measurement of transmissions, absorption, reverberation, etc. Sound fields (definitions, criteria, measurement, typical values) MLS and other coded signals Auralization: Modelling techniques, listening modes, processing requirements, existing systems, performace Artificial reverberation Sound reinforcement Acoustic privacy 5. Audio engineering Transducer modeling Loudspeaker performance characteristics Audio recording and playback formats Audio-visual interaction ADC, DAC, and Codec technologies Multi-channel sound and Virtual audio Restoration Digital audio editing Effects generation 6. Auditory System, Hearing Modeling of hearing Thresholds and Masking Frequency and level discrimination Binaural hearing and spatialization HRTF HATS and other physical models Hearing aids Auditory illusions 7. Education in acoustics 8. Electroacoustics Microphone types and their characteristics Vibration sensors and their characteristics Acoustic actuators and their characteristics Smart sensors and actuators 9. Engineering acoustics 10. Infrasonics Background noise and source signals Sensors and their characteristics Propagation models Event detection Data archiving Source identification 11. Musical Acoustics Computer music synthesis and composition Computer music recognition and analysis Singing voice analysis, synthesis, and processing Instrument measurement, modeling and synthesis Coding and compression of music 12. Noise Noise source modeling Acoustic holography Atmospheric sound propagation Source localization Noise evaluation and Annoyance thresholds 13. Non-linear acoustics Propagation equations and codes Example non-linear systems Parametric array Measurement methods Detection of non-linearities 14. Psychoacoustics Perceptual models Cochlear implants Auditory alarms 15. Seismology Seismic Coda Acoustic Profiling Propagation modes and properties for modeling Seismo-acoustic coupling 16. Speech Characteristics of speech as signals Synthesis Recognition Intelligibility and quality metrics Corpus for tests Coding and compression Display and analysis 17. Strutural acoustics and vibration BEM, FEM, EA, etc. Actuator design and deployment Propagation and radiation Machine diagnostics and prognosis Modeling, measuring and analyzing shock Materials testing 18. Telecomm POTS Wideband Echo supression Hearing aids Handset, Headset, and Wireless standards Systems for handicapped users 19. Ultrasonics
Rezensionen
From the reviews: