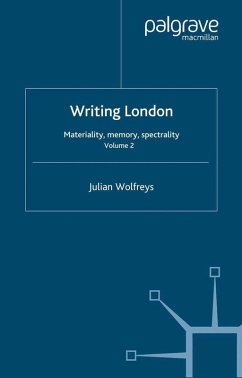 Following on from Julian Wolfrey's successful Writing London (1998), this second volume extends Wolfrey's original argument that a new urban sensibility in the nineteenth century had been developed which established new ways of writing about and responding to the city. Writing London - Volume 2 explores through a range of readings of twentieth-century films and texts the complex relationship between the experience of the city, the pleasures of the urban text and the solitary nature of these pleasures. The book has a broad focus, in part dictated not only by the transformation of literary…mehr

Andere Kunden interessierten sich auch für
Produktbeschreibung
Following on from Julian Wolfrey's successful Writing London (1998), this second volume extends Wolfrey's original argument that a new urban sensibility in the nineteenth century had been developed which established new ways of writing about and responding to the city. Writing London - Volume 2 explores through a range of readings of twentieth-century films and texts the complex relationship between the experience of the city, the pleasures of the urban text and the solitary nature of these pleasures. The book has a broad focus, in part dictated not only by the transformation of literary production in the twentieth-century, but also by the need to respond to the changes in both urban representation and London itself. Writers discussed include Virginia Woolf, Elizabeth Bowen, Maureen Duffy, Peter Ackroyd, Iain Sinclair and Michael Moorcock. The volume covers texts from the late nineteenth-century to the end of the twentieth, in a critical reading that incorporates the theoretical insights of Walter Benjamin, Guy Debord and Jacques Derrida.

Produktdetails
Autorenporträt
Julian Wolfreys is Professor of Modern Literature and Culture at Loughborough University, UK. He was previously Professor in Literature at the University of Florida, USA. His teaching and research is concerned with 19th- and 20th-century British literary and cultural studies, literary theory, the poetics and politics of identity, and the idea of the city. He is the series editor of Transitions and has written many course texts for Literature students, notably The English Literature Companion .
Inhaltsangabe
Acknowledgements Introduction Blake's London; London's Blake 'Half Lost in Night': Envisioning London or, Romantic Poetry's Capital Snapshots Citephobia: The Anxiety of Representation or, Fear and Loathing in London Dickensian Architextures of, the City and the Ineffable Fragments, Supplements, Palimpsests: a Photo-Essay Afterword: 'the Only Game in Town' or, London to Come Bibliography Index
Acknowledgements Abbreviations Introduction: of invention and the singularities of the city of London The Hieroglyphic Other: The Beetle
London
and the Anxieties of Late Imperial England The 'tortuous geography of the night world': the 'productive disorder' of the Noctuary Text Between Seeing and Knowing: Amy Levy
Arnold Bennett and Urban Counter-Romance 'All the living and the dead': Urban Anamnesis in John Berger and Iain Sinclair 'Concatenated words from which the sense seemed gone': The Waste Land Afterword Works Cited Index
Rezensionen
'Writing London makes a vital contribution to a growing field of interest in urban literature.' - Jennifer Davis Michael, The Wadsworth Circle

'Writing London is a brilliant book...Writing London conveys an excitement endowed by passion and intellectual risk, and more such studies of the nineteenth century would be welcome.' - Isobel Armstrong, Times Literary Supplement

'Writing London is an absorbing and lively study, which can usefully be added to the great flood of literature concerning the city.' - Peter Ackroyd, Times
'Julian Wolfreys has no London to offer us, thanks be! He is the most generous and witty writer going, and when he turns to London it is to release us into realms of thinking about representation, history, and narrative tricks. His own tricks are so sweet-hearted he can wind us into the remarkable illusion that we are thinking way beyond ourselves. Like his 'London', we are a set of images looking for something to represent, a materiality trying to find a story, a history that will neither go away nor appear before us directly. I know of no finer way to think or to be than is generated by this book.' - James R. Kincaid, Aerol Arnold Professor of English, University of Southern California, USA

'In a famous scene of Huysmans's A Rebours, Des Esseintes, bored with Paris in the Winter, decides to take a trip to London. He stops in a British pub next to the station and absorbs himself in the murmur of English voices, eats English fare and drinks English beer. He spends a whole day there and decides that he does not need to board the train and boat-he has felt what London is like-and heads back home. It is a similar experience that Julian Wolfreys' marvellous book forces upon us. Using the various discourses of theory as a contrapuntal backdrop, he weaves in and out of several contemporary novels by Ackroyd, Bowen, Duffy, Sinclair and others, with such mastery that in the end, we know London intimately, with all its disruptive cartographies and postmodern monuments, much better than if we had visited it.' - Jean-Michel Rabaté, Clara M. Clenenden Term Professor, Department of English, University of Pennsylvania

'Writing London - Volume 2: Materiality, Memory, Spectrality is an important book. Wonderfully learned and original, it is a distinguished sequel to Julian Wolfreys's earlier Writing London. This new book demonstrates that twentieth-century writers about London (Elizabeth Bowen, Maureen Duffy, Peter Ackroyd, Iain Sinclair, and others) anticipate or coincide with the most advanced insights of modern critical theory in Walter Benjamin, Jacques Derrida, Paul de Man, Deleuze and Guattari, Samuel Weber, Bernard Steigler, Avital Ronell, Tom Cohen, and many others... This wonderful book is a must read, especially for all those who have themselves, as I have, become haunted by London's calls.' - J. Hillis Miller, UCI Distinguished Research Professor, University of California at Irvine, USA