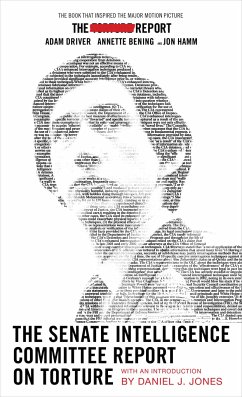 "The most extensive review of U.S. intelligence-gathering tactics in generations." -Los Angeles Times This is the Executive Summary of the "Committee Study of the Central Intelligence Agency's Detention and Interrogation Program," a U.S. Senate investigation -- a.k.a., The Torture Report. Based on more than six million pages of classified CIA documents, this report details the establishment of a covert CIA program to secretly detain and interrogate suspected terrorists. Among other matters, the report describes the evolution of the CIA program, the use of the CIA's so-called "enhanced…mehr

Andere Kunden interessierten sich auch für
Produktbeschreibung
"The most extensive review of U.S. intelligence-gathering tactics in generations." -Los Angeles Times This is the Executive Summary of the "Committee Study of the Central Intelligence Agency's Detention and Interrogation Program," a U.S. Senate investigation -- a.k.a., The Torture Report. Based on more than six million pages of classified CIA documents, this report details the establishment of a covert CIA program to secretly detain and interrogate suspected terrorists. Among other matters, the report describes the evolution of the CIA program, the use of the CIA's so-called "enhanced interrogation techniques," and how the CIA misrepresented the program to the White House, the Department of Justice, Congress, and the American people. Over five years in the making, it is presented here exactly as redacted and released by the United States government on December 9, 2014, with an introduction by Daniel J. Jones, who led the Senate investigation.
Produktdetails
Autorenporträt
Daniel J. Jones, a former FBI analyst, was Chief Investigator for the U.S Senate Select Committee on Intelligence, leading the investigation of the CIA's Detention and Interrogation Program. The United States Senate Select Committee on Intelligence was created by the U.S. Senate in 1976 as a bipartisan committee responsible for overseeing federal intelligence activities. It is the committee's responsibility to "oversee and make continuing studies of the intelligence activities and programs of the United States Government," to "submit to the Senate appropriate proposals for legislation and report to the Senate concerning such intelligence activities and programs," and to "provide vigilant legislative oversight over the intelligence activities of the United States to assure that such activities are in conformity with the Constitution and laws of the United States."
Inhaltsangabe
Contents

I. Background on the Committee Study

II. Overall History and Operation of the CIA's Detention and Interrogation Program

A. September 17, 2001, Memorandum of Notification (MON) Authorizes the CIA to Capture and Detain a Specific Category of Individuals

B. The Detention of Abu Zubaydah and the Development and Authorization of the CIA's Enhanced Interrogation Techniques

C. Interrogation in Country ██ and the January 2003 Guidelines

D. The Detention and Interrogation of 'Abd al-Rahim al-Nashiri

E. Tensions with Country ██ Relating to the CIA Detention Facility and the Arrival of New Detainees

F. The Detention and Interrogation of Ramzi Bin Al-Shibh

G. The Detention and Interrogation of Khalid Shaykh Muhammad

H. The Growth of the CIA's Detention and Interrogation Program

I. Other Medical, Psychological, and Behavioral Issues

J. The CIA Seeks Reaffirmation of the CIA's Detention and Interrogation Program in 2003

K. Additional Oversight and Outside Pressure in 2004: ICRC, Inspector General, Congress, and the U.S. Supreme Court

M. Legal and Operational Challenges in 2005

N. The Final Disposition of CIA Detainees and the End of the CIA's Detention and Interrogation Program

III. Intelligence Acquired and CIA Representations on the Effectiveness of the CIA's Enhanced Interrogation Techniques to Multiple Constituencies

A. Background on CIA Effectiveness Representations

B. Past Efforts to Review the Effectiveness of the CIA's Enhanced Interrogation Techniques

C. The Origins of CIA Representations Regarding the Effectiveness of the CIA's Enhanced Interrogation Techniques as Having "Saved Lives," "Thwarted Plots," and "Captured Terrorists"

D. CIA Representations About the Effectiveness of Its Enhanced Interrogation Techniques Against Specific CIA Detainees

G. CIA Secondary Effectiveness Representations-Less Frequently Cited Disrupted Plots, Captures, and Intelligence that the CIA Has Provided as Evidence for the Effectiveness of the CIA's Enhanced Interrogation Techniques

IV. Overview of CIA Representations to the Media While the Program Was Classified

A. The CIA Provides Information on the Still-Classified Detention and Interrogation Program to Journalists Who Then Publish Classified Information; CIA Does Not File Crimes Reports in Connection with the Stories

B. Senior CIA Officials Discuss Need to "Put Out Our Story" to Shape Public and Congressional Opinion Prior to the Full Committee Being Briefed

C. CIA Attorneys Caution that Classified Information Provided to the Media Should Not Be Attributed to the CIA

D. The CIA Engages with Journalists and Conveys an Inaccurate Account of the Interrogation of Abu Zubaydah

V. Review of CIA Representations to the Department of Justice

C. Following Suspension of the Use of the CIA's Enhanced Interrogation Techniques, the CIA Obtains Approval from the OLC for the Interrogation of Three Individual Detainees

D. May 2005 OLC Memoranda Rely on Inaccurate Representations from the CIA Regardin
Rezensionen
A Boston Globe Bestseller "This massive chronicle of malfeasance concerns not only the efficacy of certain interrogation techniques, not only the perennial clash between spies and their civilian overseers, but something far more profound: the nation's political soul." -Harper's "A high-quality version of the 500-some page report." -John Hockenberry, The Takeaway/WNYC "The most extensive review of U.S. intelligence-gathering tactics in generations." -Los Angeles Times "The Senate intelligence committee's report is a landmark in accountability . . . It is one of the most shocking documents ever produced by any modern democracy about its own abuses of its own highest principles." -The Guardian (UK) "Exhaustive . . . Haunting" -Washington Post "The small independent publisher Melville House has done it, turning 'a five-hundred-and-twenty-eight-page PDF with the slanted margins and blurred resolution of a Xerox made by a myopic high-school Latin teacher' into a more readable text." -Andrew Sullivan, The Dish "Releasing this report is an important step to restoring our values and showing the world that we are a just society." -Senate Intelligence Committee chair Senator Dianne Feinstein "A portrait of depravity that is hard to comprehend and even harder to stomach." -New York Times "Details the use of gruesome torture techniques used by the CIA and . . . concludes that the agency misled both the White House and Congress." -Christian Science Monitor "I believe the American people have a right-indeed, a responsibility-to know what was done in their name; how these practices did or did not serve our interests; and how they comported with our most important values. I commend Chairman Feinstein and her staff for their diligence in seeking a truthful accounting of policies I hope we will never resort to again." -Senator John McCain "Melville House is betting that there's enough interest in the Torture Report that people will want to have it in book form." -Rachel Maddow, MSNBC "The book business in 2015 is pretty much a crapshoot, but it's hard to believe that even the canniest insider could've predicted the sales success that indie publisher Melville House has had with the Senate Intelligence Committee Report on Torture." -Vulture "A tiny Brooklyn publishing house printed a 50,000-copy run of the Senate torture report-and it's flying off shelves faster than The Goldfinch." -Entertainment Weekly "Given the swift and harsh condemnations of CIA interrogation tactics, the Torture Report is sure to top nonfiction charts for months to come - mark my words." -Bustle "If you were wondering why it's important that indie presses exist, HERE, THIS IS WHY." -Portland Mercury "A watershed moment in contemporary publishing." -Flavorwire "It's quite the important and powerful idea: that simply repackaging material can make it more accessible and can perhaps make it last-truly last-in the way we need to know and remember it." -Ploughshares "[Melville House is] continuing the critical work of publishing important documents." -Shelf Awareness "Small but conscientious Melville [House]...is rushing to get the report out promptly." -Library Journal…mehr
Kundenbewertungen
Schreiben Sie eine Kundenbewertung zu diesem Produkt und gewinnen Sie mit etwas Glück einen 15,- EUR bücher.de–Gutschein!
Bewertung schreiben Bewertung schreiben
Mehr zum Thema
Mehr aus der Kategorie Fachbücher > Geisteswissenschaften > Geschichtswissenschaften > Nationalgeschichte > Nordamerika > USA > Weitere Bereiche