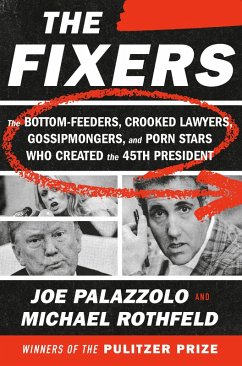 Andere Kunden interessierten sich auch für
Produktbeschreibung
The shocking, definitive account of the lawyers and media tycoons who enabled the rise of Donald Trump, featuring new revelations from a Pulitzer Prize-winning Wall Street Journal team With his blunt-force fame and the myths he's propagated about himself, Donald Trump has always moved in a world of gossip barons, crooked lawyers, and porn stars. But when he became the Republican nominee for the presidency in 2016, all of these characters crawled out from the underbelly of Trump's stardom and stumbled onto the global stage with him. In The Fixers, Joe Palazzolo and Michael Rothfeld have produced a deeply reported and exquisitely drawn portrait of that world, full of secret phone calls, hidden texts, and desperate deals, unearthing the practice of "catch and kill" by which Trump surrogates paid hush money to cover up his affairs, and detailing Trump's historic relationship with his fixers-from his early, influential relationship with Roy Cohn to his reliance on Michael Cohen, National Enquirer publisher David Pecker, and former New York mayor Rudy Giuliani. It traces the arc of their interactions from the 1970s through the 2016 campaign and beyond. It is a distinctly American saga that navigates the worlds of reality TV, cash-for-trash tabloids, single-shingle law shops, celebrity bashes, high-end real estate, pornography, and politics. The characters and settings of this book are part of a vulgar circus that crisscrosses the country, from New York to L.A. to D.C. Terrifying, darkly comic, and compulsively readable, The Fixers is an epic political adventure in which greed, corruption, lust, and ambition collide, and that leads, ultimately, to the White House.

Produktdetails
Autorenporträt
Joe Palazzolo and Michael Rothfeld led a team at The Wall Street Journal that won the 2019 Pulitzer Prize for National Reporting for a series of stories that revealed the hush-money payments to Stormy Daniels and Karen McDougal, and President Trump's direct participation in both. Palazzolo has been a reporter for the Journal since 2010. He has covered federal law enforcement, criminal justice issues, corporate corruption, and state and federal courts. He lives in Brooklyn with his wife, Tara Kelly. Rothfeld is an investigative reporter on the Metro desk of The New York Times. He previously reported for the Journal, the Los Angeles Times, Newsday, and The Philadelphia Inquirer. He lives in Brooklyn with his daughters, Annabel and Georgia.
Kundenbewertungen
Schreiben Sie eine Kundenbewertung zu diesem Produkt und gewinnen Sie mit etwas Glück einen 15,- EUR bücher.de–Gutschein!
Bewertung schreiben Bewertung schreiben
Mehr zum Thema