Silicon Valley and the Remaking of America 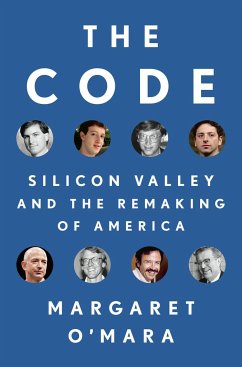 Silicon Valley and the Remaking of America

One of New York Magazine's best books on Silicon Valley!
The true, behind-the-scenes history of the people who built Silicon Valley and shaped Big Tech in America
Long before Margaret O'Mara became one of our most consequential historians of the American-led digital revolution, she worked in the White House of Bill Clinton and Al Gore in the earliest days of the commercial Internet. There she saw firsthand how deeply intertwined Silicon Valley was with the federal government--and always had been--and how shallow the common understanding of the secrets of the Valley's success actually…mehr

The true, behind-the-scenes history of the people who built Silicon Valley and shaped Big Tech in America

Long before Margaret O'Mara became one of our most consequential historians of the American-led digital revolution, she worked in the White House of Bill Clinton and Al Gore in the earliest days of the commercial Internet. There she saw firsthand how deeply intertwined Silicon Valley was with the federal government--and always had been--and how shallow the common understanding of the secrets of the Valley's success actually was. Now, after almost five years of pioneering research, O'Mara has produced the definitive history of Silicon Valley for our time, the story of mavericks and visionaries, but also of powerful institutions creating the framework for innovation, from the Pentagon to Stanford University. It is also a story of a community that started off remarkably homogeneous and tight-knit and stayed that way, and whose belief in its own mythology has deepened into a collective hubris that has led to astonishing triumphs as well as devastating second-order effects.

Deploying a wonderfully rich and diverse cast of protagonists, from the justly famous to the unjustly obscure, across four generations of explosive growth in the Valley, from the forties to the present, O'Mara has wrestled one of the most fateful developments in modern American history into magnificent narrative form. She is on the ground with all of the key tech companies, chronicling the evolution in their offerings through each successive era, and she has a profound fingertip feel for the politics of the sector and its relation to the larger cultural narrative about tech as it has evolved over the years. Perhaps most impressive, O'Mara has penetrated the inner kingdom of tech venture capital firms, the insular and still remarkably old-boy world that became the cockpit of American capitalism and the crucible for bringing technological innovation to market, or not.

The transformation of big tech into the engine room of the American economy and the nexus of so many of our hopes and dreams--and, increasingly, our nightmares--can be understood, in Margaret O'Mara's masterful hands, as the story of one California valley. As her majestic history makes clear, its fate is the fate of us all.

Produktdetails
Autorenporträt
Margaret O'Mara is Professor of History at the University of Washington. She writes and teaches about the history of U.S. politics, the growth of the high-tech economy, and the connections between the two, and is the author of Cities of Knowledge and Pivotal Tuesdays . She received her MA/PhD from the University of Pennsylvania and her BA from Northwestern University. Prior to her academic career, she worked in the Clinton White House and served as a contributing researcher at the Brookings Institution. She lives in the Seattle area with her husband Jeff and their two daughters.
Rezensionen
Shortlisted for the J. Anthony Lukas Book Prize
A Financial Times Best Book of 2019
A Publishers Weekly Best Book of 2019
Longlisted for the Porchlight Business Book Awards 2019

How an otherwise unexceptional swath of suburbia came to rule the world is the central question animating The Code, Margaret O Mara s accessible yet sophisticated chronicle of Silicon Valley. An academic historian blessed with a journalist s prose, O Mara focuses less on the actual technology than on the people and policies that ensured its success. . . . O Mara toggles deftly between character studies and the larger regulatory and political milieu. New York Times Book Review

"Condensing this range of stories into a compact narrative isn t a task for the timid, but Margaret O Mara, a historian at the University of Washington, has pulled off the feat with panache in The Code: Silicon Valley and the Remaking of America. She distills voluminous monographs and biographies, newspaper articles and trade-industry publications, unpublished company materials and transcripts that she gleaned from various university archives into a briskly paced narrative. She also enlivens the book with the reflections of dozens of participants who played roles in the Valley early on, obtained through interviews she conducted and from oral histories collected by others. . . . The Code is a wise chronicle of the accretion and deployment of power and is especially sharp in tracking the Valley s evolving relationship to Washington, D.C. By taking the long view, Ms. O Mara provides us with the ability to see the roots of contemporary problems created by Silicon Valley s rise, such as for-profit companies compiling vast digital storehouses of personal information or freedom in the internet era being used to spread hatred and disinformation." The Wall Street Journal

[A] fresh, provocative take that upends the self-serving mythologizing of the valley s own. . . . O Mara spotlights the village of institutions, networks and ancillary services corps of bankers, lawyers and marketers overlooked in many accounts of the valley s exceptionalism behind the big moments. San Francisco Chronicle

"O Mara embeds Silicon Valley in the sweep of American political history . . . The Code s great strength is that it captures the various meanings projected onto Silicon Valley . . . What comes through most powerfully in her narrative are the wild social hopes once projected on to computers." New Republic

In her wide-ranging history of Silicon Valley, Margaret O Mara gets behind the myth of geniuses in garages and uncovers the true origin story. O Mara . . . brings sophistication and nuance to her narrative, covering not only the engineer-dominated culture of building products, but also the absence of attention to their implications for the world. The National Book Review

Puts a gloriously human face on the history of computing in the U.S. . . . extraordinarily comprehensive . . . a must-read for anyone interested in how a one-horse town birthed a revolution that has shifted the course of modern civilization. Publishers Weekly, starred review

In a field crowded with accounts of how the tech industry has developed, this work places the story of our techno-human transformation within a thoughtful Darwinian context. A necessary addition to both public and academic library collections, it will become a reference for how technology has influenced America. Library Journal

Entertaining and nuanced history . . . Concerned technology users which pretty much sums up all of us will find much of interest here. Booklist, starred review

"[I]lluminating history . . . A well-researched book students of technological history and the emergence of the digital economy will want to know." Kirkus Reviews

"The Code will rightfully take its place as the definitive single-volume account of how tech got to be Tech, from its infancy in the fruit orchards of Northern California to the present-day juggernaut that is Silicon Valley. O'Mara captures the stories of transformational founders and leaders, technical breakthroughs, and organizational innovations over the past half century as no one has before." Mitch Kapor, Kapor Capital

From Fred Terman to Mark Zuckerberg, The Code provides a panoramic account of the people who, over the past half century, transformed northern California and the US west into a 21st century mecca. O'Mara artfully narrates the complex interactions between public and private sectors, old and new economies, and individual and collective resources that underlie the region's technological dynamism. AnnaLee Saxenian, dean of the School of Information at University of California, Berkeley

For more than half a century, Silicon Valley has been the most consistently innovative region in the world. In this panoramic history, Margaret O Mara delivers the full portrait: from the engineers in their pressed shirtsleeves to the communalists of the Homebrew Computer Club, from the Valley s free-market mythos to its canny political lobbying. Sebastian Mallaby, author of More Money Than God

The Code unlocks the secrets of Silicon Valley's success, but it does much more. With the deftness of a novelist and the care of a scholar, Margaret O'Mara guides readers on an exciting journey from the pioneers who birthed Silicon Valley, to often overlooked government dollars that served as its spur, to portraits of both famed individuals like Jobs and Gates and of those who deserve to be famous, to an industry that both inspires and horrifies. This is a vital, important book. Ken Auletta, author of Googled and Frenemies

Silicon Valley s long and complicated relationship with the US government has gone largely unchronicled. Until now in The Code Margaret O Mara opens a significant new window into that history. She has captured a portrait of an industry that has until now largely operated outside of the public eye. The Code reveals that Valley is both more of a creature of its partnership with government and an increasingly powerful influence upon it. The Code is an important addition to the literature that seeks to understand Silicon Valley and its impact on the entire world. John Markoff, author of What the Dormouse Said

A definitive chronicle of how one small group of people, in one particular place, changed everything for the rest of us. Margaret O Mara tells the story with just the right level of detail, allowing you to form your own opinion as to whether the fire was an accident or deliberately set. George Dyson, author of Turing s Cathedral