The Life of José María Sobral

Scientist, Diarist, and Pioneer in Antarctica 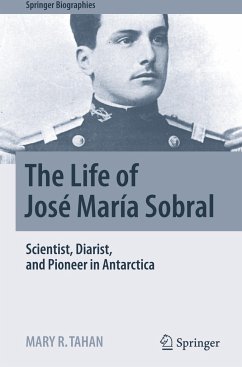 The Life of José María Sobral

Scientist, Diarist, and Pioneer in Antarctica

Featuring the previously unpublished diary of José María Sobral, Under-Lieutenant of the Argentine Navy, this book provides insight on his life and his participation in Otto Nordenskjöld's Swedish Antarctic Expedition of 1901-1903.
This biography highlights Sobral's personal thoughts on the mission, his position, the science being discovered, and the geopolitical situation around him. The reader also learns about the state of science, Antarctic exploration, and cultural-political-issues at that time.
The author's critical and contextual analysis of the diary explains more about Sobral…mehr

This biography highlights Sobral's personal thoughts on the mission, his position, the science being discovered, and the geopolitical situation around him. The reader also learns about the state of science, Antarctic exploration, and cultural-political-issues at that time.

The author's critical and contextual analysis of the diary explains more about Sobral and his role in Argentina, Antarctica, science and history. This paints a detailed picture of Sobral as an individual, and provides the framework to depict the world in which Sobral lived and worked as well as his expedition and accomplishments. The book aims to explain the context of Sobral's writings, the significance of the events he described in his diary entries, and the way all of these events tied into history and scientific discovery.

Produktdetails
Autorenporträt
Mary R. Tahan is a writer, producer, and documentarian, with a professional background in journalism and marketing. Internationally renowned for her educational and informational series, she has authored many scholarly articles and historical books, and produced/directed documentary films. Her scholarly articles and lectures/presentations focus on Antarctica and the "heroic age of exploration", and cover many countries and she has documented individuals and organizations as well as cities and historical events. As part of her research for her series of films and books on Polar exploration, Mary R. Tahan traveled to Antarctica by invitation of the Dirección Nacional del Antártico (Instituto Antártico Argentino), where she performed on-site photography and videography of the Antarctic landscape and historical sites, as well as conducted interviews with scientists and curators. Her research has also taken her to Argentina, Norway, France, Russia, and England, where she has also interviewed Polar historians and descendants of the early explorers of the Arctic and Antarctic. Mary R. Tahan obtained her bachelor¿s degree in English at the University of California at Los Angeles and participated in the UCLA master¿s program in Motion Pictures & Television, with an emphasis in Critical Studies. Her current memberships and activities include the Royal Geographical Society (with IBG); the Scientific Committee on Antarctic Research (SCAR) History, Humanities and Social Sciences Expert Group; Dirección Nacional del Antártico; Historiadores Antárticos Latinoamericanos; and the National Library of Norway. She was nominated as Honorary Historian with the Argentine Navy.
Inhaltsangabe
Foreword.- Preface.- Introduction.- Editor's Note.- Background on the Expedition.- Chapter 1 The Journey to Antarctica.- The First Winter at Snow Hill.- Chapter 2 The Second Winter at Snow Hill.- Chapter 3 The Third Winter at Snow Hill.- Chapter 4 Personal Recommendations, Historical Overview and Statistical Facts.- Chapter 5 The Rescue of All Three Parties of the Expedition by the Argentine Corvette "Uruguay" and the Return of the Expedition to Buenos Aires.- Chapter 6 Transcript of the Speech Delivered by Sobral to the Argentine Naval League.- List of Figures.
Rezensionen
"The book provides commentary as well as access to Sobral's diary entries as he joins the first expedition to overwinter intentionally in Antarctica and unintentionally spend two successive winters there. ... It provides a glimpse of what Antarctica was like before human activity began to change it in an accelerating way, how our understanding of Antarctic animals and weather systems began to accumulate at first, and also something of the psychological progression of a person living in close quarters in an extreme environment for a long time. ... it becomes an engrossing [read]." (Steven A. Kolmes, Environment, Science and Policy for Sustainable Development, Vol. 62 (2), 2020)
"The contrast between [the] extraordinary environmental beauty, dedicated work, hardship and interpersonal struggle make this an absorbing book which would be of great use to readers interested in the Heroic Age of Antarctic exploration and to students of the period. Sobral's diary is an expression of the indomitability of the human spirit. It encapsulates the contemporary idea of Antarctica as a crucible, putting men to the ultimate test." (Patricia Millar, Polar Research, Vol. 38, 2019)
Kundenbewertungen
Schreiben Sie eine Kundenbewertung zu diesem Produkt und gewinnen Sie mit etwas Glück einen 15,- EUR bücher.de–Gutschein!
Bewertung schreiben Bewertung schreiben
2 Marktplatz-Angebote für "The Life of José María Sobral" ab 1,00 €
Mehr zum Thema