The Myth and Reality of Hitler's Secret Police 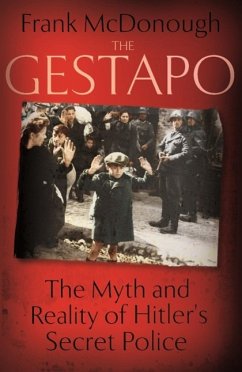 The Myth and Reality of Hitler's Secret Police

Name as a 2016 Book of the Year by the Spectator
A Daily Telegraph 'Book of the Week' (August 2015)
Longlisted for 2016 PEN Hessell-Tiltman Prize
Ranked in 100 Best Books of 2015 in the Daily Telegraph
Professor Frank McDonough is one of the leading scholars and most popular writers on the history of Nazi Germany.
Frank McDonough's work has been described as, 'modern history writing at its very best...Ground-breaking, fascinating, occasionally deeply revisionist' by renowned historian Andrew Roberts.
Drawing on a detailed examination of previously unpublished Gestapo…mehr

Professor Frank McDonough is one of the leading scholars and most popular writers on the history of Nazi Germany.

Drawing on a detailed examination of previously unpublished Gestapo case files this book relates the fascinating, vivid and disturbing accounts of a cross-section of ordinary and extraordinary people who opposed the Nazi regime. It also tells the equally disturbing stories of their friends, neighbours, colleagues and even relatives who were often drawn into the Gestapo's web of intrigue. The book reveals, too, the cold-blooded and efficient methods of the Gestapo officers.

This book will also show that the Gestapo lacked the manpower and resources to spy on everyone as it was reliant on tip offs from the general public. Yet this did not mean the Gestapo was a weak or inefficient instrument of Nazi terror. On the contrary, it ruthlessly and efficiently targeted its officers against clearly defined political and racial 'enemies of the people'.

The Gestapo will provide a chilling new doorway into the everyday life of the Third Reich and give powerful testimony from the victims of Nazi terror and poignant life stories of those who opposed Hitler's regime while challenging popular myths about the Gestapo.

Frank McDonough is Professor of International History at Liverpool John Moores University. He was born in Liverpool. He studied history at Balliol College, Oxford and gained a PhD from Lancaster University.
He has written many books on the Third Reich, including: Hitler and the Rise of the Nazi Party (2012), Sophie Scholl: The Woman Who Defied Hitler (2009), The Holocaust (2008), Opposition and Resistance in Nazi Germany (2001), Hitler, Chamberlain and Appeasement (2002), and Hitler and Nazi Germany (1999).
He has also published many other books, most notably, The Origins of the Second World War: An International Perspective (2011), The Conservative Party and Anglo-German Relations (2007), Chamberlain, Appeasement and the British Road to War (1998) and The Origins of the First and Second World Wars (1997).
Frank has appeared on TV and radio numerous times discussing the Third Reich. He featured in a six part series 'Nazi Secrets' for National Geographic in 2012 and a 10 part series 'The Rise of the Nazis' for the Discovery Channel. He has appeared in Third Reich documentaries for BBC 1, Channel 5, and Russia Today. He acted as 'Historical Consultant' for the BBC 'History of the World Project' and the 'BBC World War One at Home' series of programmes.
The US History Network placed Frank's popular Twitter account: @FXMC1957 in the Top 30 most popular historical Twitter accounts in the World.
Rezensionen
This fascinating and absorbing new book, drawing on original Gestapo files, provides a wide range of vivid and fascinating stories that explore the tragic human plight of victims of Nazi terror, and the motives of the German citizens who denounced them. By examining in depth how the Gestapo dealt with Jews, Communists, religious dissidents and those on the margins of society, McDonough has produced a brilliant, readable and deeply significant examination of Hitler's notorious secret police. Andrew Roberts
Kundenbewertungen
Schreiben Sie eine Kundenbewertung zu diesem Produkt und gewinnen Sie mit etwas Glück einen 15,- EUR bücher.de–Gutschein!
Bewertung schreiben Bewertung schreiben
Mehr zum Thema