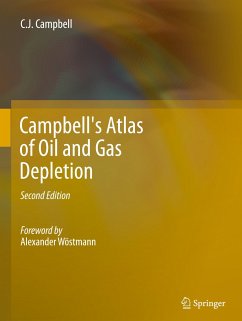 Campbell's Atlas of Oil and Gas Depletion, Second Edition, is the product of a half-century of critical analysis and updating of data on the status of oil and gas depletion by country, region and the world as a whole. Separate analyses of conventional and non-conventional oil and gas, which are depleting at different rates and costs, show when these critical energy sources peak and decline. The Atlas also summarizes the history and political circumstances of each country to assess the impact on oil and gas production and reserves. It contrasts the First Half of the Oil Age, which saw the…mehr

Andere Kunden interessierten sich auch für
Produktbeschreibung
Campbell's Atlas of Oil and Gas Depletion, Second Edition, is the product of a half-century of critical analysis and updating of data on the status of oil and gas depletion by country, region and the world as a whole. Separate analyses of conventional and non-conventional oil and gas, which are depleting at different rates and costs, show when these critical energy sources peak and decline. The Atlas also summarizes the history and political circumstances of each country to assess the impact on oil and gas production and reserves. It contrasts the First Half of the Oil Age, which saw the rapid expansion of the world economy, allowing the population to grow six-fold, with the Second Half, which will witness a general contraction as these easy, high-density energy supplies dwindle. The transition threatens to be a time of great economic, financial and political tensions. The Atlas, which has been compiled and updated by prominent geologist, former oil company executive, and oil analyst Colin Campbell since the 1960s, addresses the need for a reliable and comprehensive database on a subject essential to governments, industry, academia, and the population as a whole as we attempt to adapt to these critically changing circumstances.

Produktdetails
Autorenporträt
Colin Campbell was born in 1931 in Berlin, Germany, but stayed only three months before his father, an architect, returned to his home country as his successful practice in Germany had crashed in the Depression. Colin then had a rather isolated childhood at Chapel Point, a rocky headland in Cornwall in the west of England, where his father was building the first houses of what he hoped to be a model village. But the Second World War brought that project to an end. School days followed before he succeeded in getting into Oxford University in 1951 to read geology. He enjoyed university life greatly and stayed on to take a D.Phil (Ph.D), based on mapping a remote part of Connemara in Ireland and the interior of Borneo to which he went on a university expedition. University days came to an end in 1957 and he went on to work for Texaco in Trinidad as a field geologist. There he came under the influence of Hans Kugler, a Swiss scientist who was one of the pioneers of micro-palaeontology and a great inspiration. In 1959, he was transferred to Colombia and had many colourful experiences mapping often bandit-infested remote areas on mule-back, and making a fossil collection to unravel Andean geology.  He married Bobbins, a charming girl he had met in Trinidad, and they were later blessed with a son and daughter. He continued to work in the oil industry in Colombia, Australia, Papua-New Guinea, the United States, Ecuador, the United Kingdom, Ireland and Norway, ending as an Executive Vice-President. One particularly relevant experience was participation in a world evaluation in 1969 which opened his eyes to the finite nature of the resource and the nature of depletion, which in turn made a deep impression. In latter years he found himself engaged in negotiations to secure oil rights in various countries and came to understand the role of politics and influence both internally within the company and in its external relations. His formal career ended in 1989, but he accepted various consulting assignments. He also developed his long interest in depletion founding the Association for the Study of Peak Oil ("ASPO"), which now has associates in more than thirty countries. He has written seven books on the subject as well as many articles in scientific and other publications, which attracted increasing media interest. This led to participation in many conferences and presentations to governments. He and his wife now live in a village in the west of Ireland.
Inhaltsangabe
PrefaceForewordUnits and Conversion Factors Part I: Introduction, Reporting, and MethodologyChapter 1- INTRODUCTIONChapter 2 - THE ESTIMATION AND REPORTING OF RESERVES AND PRODUCTIONChapter 3 - THE METHODOLOGY OF THE DEPLETION MODEL Part II: AFRICAChapter 4: Algeria Chapter 5: AngolaChapter 6: CameroonChapter 7: ChadChapter 8: CongoChapter 9: EgyptChapter 10: GabonChapter 11: LibyaChapter 12: NigeriaChapter 13: SudanChapter 14: TunisiaChapter 15: UgandaChapter 16: Africa Region Part III: ASIA-PACIFICChapter 17: AustraliaChapter 18: BruneiChapter 19: IndiaChapter 20: IndonesiaChapter 21: MalaysiaChapter 22: PakistanChapter 23: Papua - New GuineaChapter 24: ThailandChapter 25: VietnamChapter 26: Asia-Pacific Region Part IV: EURASIAChapter 27: AlbaniaChapter 28: AzerbaijanChapter 29: ChinaChapter 30: CroatiaChapter 31: HungaryChapter 32: Kazakhstan Chapter 33: Romania Chapter 34: RussiaChapter 35: TurkmenistanChapter 36: UkraineChapter 37: UzbekistanChapter 38: Eurasia Region Part V: EUROPEChapter 39: AustriaChapter 40: DenmarkChapter 41: FranceChapter 42: GermanyChapter 43: ItalyChapter 44: NetherlandsChapter 45: NorwayChapter 46: United KingdomChapter 47: Europe Region Part VI: LATIN AMERICAChapter 48: ArgentinaChapter 49: BoliviaChapter 50: BrasilChapter 51: ChileChapter 52: ColombiaChapter 53: EcuadorChapter 54: MexicoChapter 55: PeruChapter 56: TrinidadChapter 57: VenezuelaChapter 58: Latin America Region Part VII: MIDDLE EASTChapter 59: BahrainChapter 60: IranChapter 61: IraqChapter 62: KuwaitChapter 63: Neutral ZoneChapter 64: OmanChapter 65: QatarChapter 66: Saudi ArabiaChapter 67: SyriaChapter 68: TurkeyChapter 69: United Aran EmiratesChapter 70: YemenChapter 71: Middle East Region Part VIII: NORTH AMERICAChapter 72: CanadaChapter 73: United StatesChapter 74: REGION Part IX: Global Analysis and PerspectiveChapter 75: THE WORLD'S REGULAR CONVENTIONAL OIL AND GASChapter 76: THE WORLD'S NON-CONVENTIONAL OIL AND GASChapter 77: THE OIL AGE IN PERSPECTIVEBIBLIOGRAPHY
Rezensionen
From the reviews of the second edition: "If you are looking for an authoritative analysis of oil and gas depletion, minus caricature, clichés and political statements ... then look no further than this book. ... The Atlas will educate and inform those interested in the oil and gas industry's future and the challenges it faces - be they existential or commercial. In particular, those professionals involved with policymaking, petroleum economics, history of the oil and gas business, academia and market analysis." (Oilholics Synonymous Report, May, 2013)
Kundenbewertungen
Schreiben Sie eine Kundenbewertung zu diesem Produkt und gewinnen Sie mit etwas Glück einen 15,- EUR bücher.de–Gutschein!
Bewertung schreiben Bewertung schreiben
Mehr zum Thema