These Are Not Gentle People (eBook, ePUB)

A tense and pacy true-crime thriller 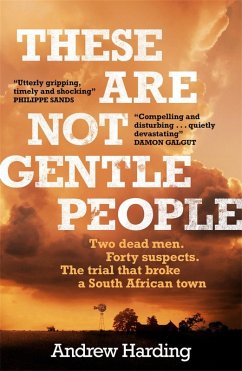 These Are Not Gentle People (eBook, ePUB)

A tense and pacy true-crime thriller

"Utterly gripping, timely and shocking" PHILIPPE SANDS
"Compelling and disturbing . . . quietly devastating" DAMON GALGUT
"This is a book of profound importance . . . A masterpiece" ALEXANDER McCALL SMITH
"A vintage crime story . . . an extraordinary tale . . . It is written as a drama, part thriller, part tragedy" ALEC RUSSELL, Financial Times
"A smartly paced true-crime thriller with a vivid cast of characters . . . as tense as it is disturbing" JOHN CARLIN, author of Playing the Enemy: Nelson Mandela and the Game That Made a Nation
Two dead men. Forty suspects. The…mehr


"This is a book of profound importance . . . A masterpiece" ALEXANDER McCALL SMITH

"A smartly paced true-crime thriller with a vivid cast of characters . . . as tense as it is disturbing" JOHN CARLIN, author of Playing the Enemy: Nelson Mandela and the Game That Made a Nation

"Look what the fucking dogs did to them, someone muttered. No-one mentioned the rope, or the monkey-wrench, or the gun, or the knife, or the stick, or the whip, or the blood-stained boots. In fact, no-one said much at all. It seemed simpler that way. There was no sense in pointing fingers.'"

At dusk, on a warm evening in 2016, a group of forty men gathered in the corner of a dusty field on a farm outside Parys in the Free State. Some were in fury. Others treated the whole thing as a joke - a game. The events of the next two hours would come to haunt them all. They would rip families apart, prompt suicide attempts, breakdowns, divorce, bankruptcy, threats of violent revenge and acts of unforgivable treachery.

These Are Not Gentle People is the story of that night, and of what happened next. It's a courtroom drama, a profound exploration of collective guilt and individual justice, and a fast-paced literary thriller.

Award-winning foreign correspondent and author Andrew Harding traces the impact of one moment of collective barbarism on a fragile community - exploding lies, cover-ups, political meddling and betrayals, and revealing the inner lives of those involved with extraordinary clarity.

The book is also a mesmerising examination of a small town trying to cope with a trauma that threatens to tear it in two - as such, it is as much a journey into the heart of modern South Africa as it is a gripping tale of crime, punishment and redemption.

When a whole community is on trial, who pays the price?


Produktdetails
Autorenporträt
Andrew Harding left London in 1991, aged twenty-four, and has lived and worked abroad as a foreign correspondent ever since. He spent a decade in the former Soviet Union before moving to east Africa and then to Singapore as the B.B.C.'s Asia correspondent. Since 2009, he has been the B.B.C.'s Africa correspondent. He has reported from numerous conflict zones, including Chechnya, Afghanistan, Iraq, D.R. Congo, Burma, Central African Republic, Mali, Côte d'Ivoire and Libya, winning many awards including an Emmy. Andrew is married, with three sons. He is the author of The Mayor of Mogadishu: A Story of Chaos and Redemption in the Ruins of Somalia (2016).
Kundenbewertungen
Schreiben Sie eine Kundenbewertung zu diesem Produkt und gewinnen Sie mit etwas Glück einen 15,- EUR bücher.de–Gutschein!
Bewertung schreiben Bewertung schreiben
Mehr zum Thema