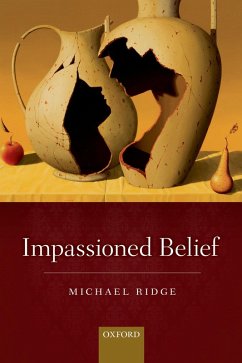 Andere Kunden interessierten sich auch für
Produktbeschreibung
Impassioned Belief presents an original expressivist theory of normative judgments. According to his Ecumenical Expressivism normative judgements are hybrid states partly constituted by ordinary beliefs and partly constituted by desire-like states. Michael Ridge builds on a series of articles in which he has developed this theory, but moves beyond them in the following key respects. First, Ridge now more sharply distinguishes semantics from meta-semantics, situating Ecumenical Expressivism firmly on the meta-semantic side of this divide, thus enabling Ecumenical Expressivism to accommodate a fully truth-conditional approach to first-order semantics. Second, this distinction allows Ridge to offer a distinctive contextualist semantic framework for normative discourse. Contra orthodox presuppositions, a contextualist semantics does not entail cognitivism-at least not if we carefully heed the semantics/meta-semantics distinction. Third, because this contextualist framework is couched in terms of standards, Ridge now rejects his previous 'ideal advisor' approach and instead adopts a theory couched in terms of acceptable standards of practical reasoning. This has interesting consequences for longstanding debates over the context-sensitivity of reasons, the so-called 'buck-passing' theory of value, and the role of principles in normative thought ('particularism' versus 'generalism'). Fourth, drawing on the work of Scott Soames, Ridge develops a novel theory of normative propositions, according to which they are a certain kind of cognitive event type. Somewhat surprisingly, this conception allows that there can be irreducible normative propositions, even given expressivism. Fifth, Ridge offers a novel approach to talk of truth which enables expressivists to accommodate truth-aptness without committing themselves to deflationism about truth. In fact, the theory is flexible enough that it can elegantly be combined even with a robust correspondence conception of truth. In addition, Ridge offers an improved solution to the dreaded 'Frege-Geach' problem (one which better preserves the formal nature of logic than his previous account), a novel theory of disagreement itself, a rather different sort of 'hybrid' treatment of rationality discourse, and an independently useful taxonomy and critical survey of the bewildering variety of other 'hybrid' approaches in the literature.