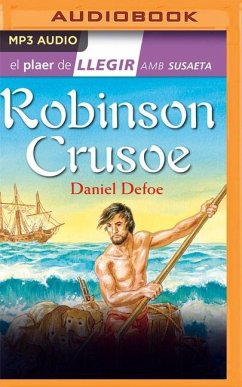 Jetzt bewertenJetzt bewerten
Andere Kunden interessierten sich auch für
Produktdetails
Autorenporträt
Daniel Defoe (c. 1660 - 24 April 1731),[1] born Daniel Foe, was an English trader, writer, journalist, pamphleteer and spy. He is most famous for his novel Robinson Crusoe, which is second only to the Bible in its number of translations.[2] He has been seen as one of the earliest proponents of the English novel, and helped to popularise the form in Britain with others such as Aphra Behn and Samuel Richardson.[3] Defoe wrote many political tracts and often was in trouble with the authorities, including a spell in prison. Intellectuals and political leaders paid attention to his fresh ideas and sometimes consulted with him. Defoe was a prolific and versatile writer, producing more than three hundred works[4]-books, pamphlets, and journals-on diverse topics, including politics, crime, religion, marriage, psychology, and the supernatural. He was also a pioneer of business journalism[5]and economic journalism. Daniel Foe (his original name) was probably born in Fore Street in the parish of St Giles Cripplegate, London.[7] Defoe later added the aristocratic-sounding "De" to his name, and on occasion claimed descent from the family of De Beau Faux. His birthdate and birthplace are uncertain, and sources offer dates from 1659 to 1662, with the summer or early autumn of 1660 considered the most likely.[8] His father, James Foe, was a prosperous tallow chandler and a member of the Worshipful Company of Butchers. In Defoe's early life, he experienced some of the most unusual occurrences in English history: in 1665, 70,000 were killed by the Great Plague of London, and the next year, the Great Fire of London left standing only Defoe's and two other houses in his neighbourhood.[9] In 1667, when he was probably about seven, a Dutch fleet sailed up the Medway via the River Thames and attacked the town of Chatham in the raid on the Medway. His mother, Annie, had died by the time he was about ten. Defoe was educated at the Rev. James Fisher's boarding school in Pixham Lane in Dorking, Surrey.[12] His parents were Presbyterian dissenters, and around the age of 14, he attended a dissenting academy at Newington Green in London run by Charles Morton, and he is believed to have attended the Newington Green Unitarian Church and kept practising his Presbyterian religion.[13][14] During this period, the English government persecuted those who chose to worship outside the Church of England. Defoe entered the world of business as a general merchant, dealing at different times in hosiery, general woollen goods, and wine. His ambitions were great and he was able to buy a country estate and a ship (as well as civets to make perfume), though he was rarely out of debt. He was forced to declare bankruptcy in 1692.[2] On 1 January 1684, Defoe married Mary Tuffley at St Botolph's Aldgate.[15] She was the daughter of a London merchant, receiving a dowry of £3,700-a huge amount by the standards of the day. With his debts and political difficulties, the marriage may have been troubled, but it lasted 50 years and produced eight children.
Rezensionen