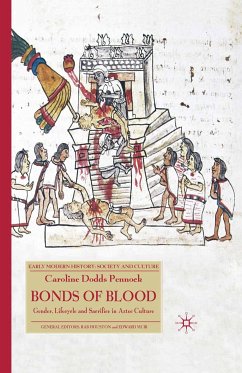 The history of the Aztecs has been haunted by the spectre of human sacrifice. Reinvesting the Aztecs with a humanity frequently denied to them, and exploring their spectacular religious violence as a comprehensible element of life, this book integrates a fresh interpretation of gender with an innovative study of the everyday life of the Aztecs.…mehr

Andere Kunden interessierten sich auch für
Produktbeschreibung
The history of the Aztecs has been haunted by the spectre of human sacrifice. Reinvesting the Aztecs with a humanity frequently denied to them, and exploring their spectacular religious violence as a comprehensible element of life, this book integrates a fresh interpretation of gender with an innovative study of the everyday life of the Aztecs.

Produktdetails
Autorenporträt
CAROLINE DODDS PENNOCK is Lecturer in International History at the University of Sheffield, having previously held posts in Cambridge and Leicester. She is the author of both popular and scholarly articles on Aztec and Atlantic history and has also worked on several projects for the BBC.
Inhaltsangabe
List of Figures and Tables Note on Translation and Terminology Acknowledgements List of Abbreviations Glossary Introduction Living with Death Birth and Blood Growing Up Tying the Knot Marriage and Partnership Outside the Norm Aging and Mortality Conclusion
Rezensionen
Winner of the 2008 Royal Historical Society Gladstone Prize

'Few fields of study can present the historian with such a challenge as the world of the pre-conquest Aztecs ... [a] challenge that Caroline Dodds Pennock meets triumphantly. Her analysis of the rich but problematic evidence is unfailingly rigorous. Both theoretical and methodological sophistication, however, are worn lightly. What emerges is a vivid and convincing reconstruction of a society whose harsh view of life and death was tempered by the experience of warmth, and even joy, achieved through human relationships and the routines of everyday life.'

'An exceptional volume because of its humanising approach and attention to individual concerns,

emotions, and perspectives. This beautifully written book is recommended for a

'Genderspecialists and students of all levels will find worthwhile [Dodds Pennock's] search for the intimate as revealed by sources that downplay the personal and affective, rendered as itis in graceful, accessible prose. - Susan Kellogg, Hispanic American Historical Review

'This study, beautifully written and organized, is a fresh approach to both the problems of understanding Aztec human sacrifice, a problem as old as the first European viewers of this society in the sixteenth century, and of characterizing Aztec gender relations, which was introduced as a field of study in the latter half of the twentieth century. With exhaustive research Caroline Dodds Pennock ties together these two strains of enquiry in a tour-de-force argument that resolves many seeming contradictions and allows the modern Westerner to enter Aztec society with less apprehension. While making sense of Aztec thought, even more valuable is her humanization of the Aztecs through the publication of the few texts thatreveal intimate and individual aspects of behaviour and interpretation of well-known formulaic pronouncements as moving expressions of human emotion. This last is a difficult feat to accomplish for a culture that is usually presented as overwhelmingly communal, public, and unfeeling.' - Emily Umberger, Arizona State University, USA