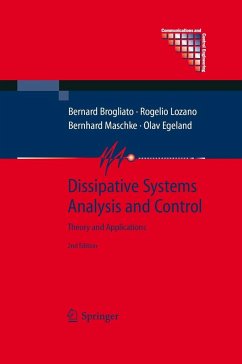 Dissipative Systems Analysis and Control (second edition) presents a fully revised and expanded treatment of dissipative systems theory, constituting a self-contained, advanced introduction for graduate students, researchers and practising engineers. It examines linear and nonlinear systems with examples of both in each chapter; some infinite-dimensional and nonsmooth examples are also included. Throughout, emphasis is placed on the use of the dissipative properties of a system for the design of stable feedback control laws. The theory is consistently substantiated by experimental results and…mehr

Andere Kunden interessierten sich auch für
Produktbeschreibung
Dissipative Systems Analysis and Control (second edition) presents a fully revised and expanded treatment of dissipative systems theory, constituting a self-contained, advanced introduction for graduate students, researchers and practising engineers. It examines linear and nonlinear systems with examples of both in each chapter; some infinite-dimensional and nonsmooth examples are also included. Throughout, emphasis is placed on the use of the dissipative properties of a system for the design of stable feedback control laws. The theory is consistently substantiated by experimental results and by reference to its application in illustrative physical cases (Lagrangian and Hamiltonian systems and adaptive controllers are covered thoroughly).The second edition is substantially reorganized both to accommodate new material and to enhance its pedagogical properties.
Produktdetails
Autorenporträt
Rogelio Lozano has worked in a number of institutions with a high reputation for control engineering - the University of Newcastle in Australia, NASA's Langley Research Center and now as CNRS Research Director at the University of Compiègne. He is a very experienced author in the control field having been an associate editor of Automatica and now of International Journal of Adaptive Control and Signal Processing. He has published 26 refereed journal articles in the last five years and he is the co-author of 3 previous titles for Springer (not including the first edition of the present title) in the Communications and Control Engineering and Advances in Industrial Control series: Landau, I.D., Lozano, R. and M'Saad, M. Adaptive Control (3-540-76187-X, 1997) Fantoni, I. and Lozano, R. Non-linear Control for Underactuated Mechanical Systems (1-85233-423-1, 2001) Castillo, P., Lozano, R. and Dzul, A., Modelling and Control of Mini-Flying Machines (1-85233-957-8, 2005) In addition to having served (1991 - 2001) as Chargé de Recherche at CNRS, and as, now, Directeur de Recherche at INRIA, Bernard Brogliato is an Associate Editor for Automatica (since 2001) a reviewer for Mathematical Reviews and writes book reviews for ASME Applied Mechanics Reviews. He has served on the organising and other committees of various European and international conferences sponsored by an assortment of organizations, most prominently, the IEEE. He has been responsible for examining the PhD and Habilitation theses of 16 students and takes an active part in lecturing at summer schools in several European countries. Doctor Brogliato is the director of SICONOS (a European project concerned with Modelling, Simulation and Control of Nonsmooth Dynamical Systems) which carries funding of EUR2 million. Olav Egeland is Professor at the Norwegian University of Science and Technology (NTNU). He graduated as siv.ing. (1984) and dr.ing. (1987) from the Department of Engineering Cybernetics, NTNU, and has been a professor at the department since 1989. In the academic year 88/89 he was at the German Aerospace Center in Oberpfaffenhofen outside of Munich. In the period 1996-1998 he was Head of Department of Engineering Cybernetics, Vice Dean of Faculty of Electrical Engineering and Telecommunications, and member of the Research Committee for Science and Technology at NTNU. He was Associate Editor of the IEEE Transactions on Automatic Control 1996-1999 and of the European Journal of Control 1998-2000. He received the Automatica Prize Paper Award in 1996, and the 2000 IEEE Transactions on Control Systems Technology Outstanding Paper Award. He has supervised the graduation of 75 siv.ing. and 19 dr.ing., and was Program Manager of the Strategic University Program in Marine Cybernetics at NTNU. Currently he is coordinator of the control activity of the Centre of Ships and Ocean Structures. He has wide experience as a consultant for industry, and is co-founder of Marine Cybernetics, which is a company at the NTNU incubator. His research interests are within modeling, simulation and control of mechanical systems with applications to robotics and marine systems.
Inhaltsangabe
Positive Real Systems.- Kalman-Yakubovich-Popov Lemma.- Dissipative Systems.- Stability of Dissipative Systems.- Dissipative Physical Systems.- Passivity-based Control.- Adaptive Control.- Experimental Results.- Erratum.
Rezensionen
From reviews for the first edition:

The book provides an extensive exposition of both the mathematics, physics motivation and control applications of passivity and dissipativity... the richness of a very impressive inventory of illustrating examples stands out as a point of excellence... Also outstanding is the large number of specialized journal type results and inventory of methods contained and, indeed, elaborated in detail in the book.

The book... is a unique monograph. It is an excellent book for its diverse technical contents as well as its clear presentation. The book presents a comprehensive and rigorous coverage of dissipative systems theory... including a collection of interesting experimental results. Analysis is rigorous and presentation is easy to follow. It is an excellent reference for graduate students, engineers and researchers.

This book excellently combines the theoretical outline including the mathematical foundations with lots of elaborate examples. There is almost no concept or consideration which is not illustrated by some calculation for a given systems... The solutions found by the authors are very instructive for readers interested in applications... This book is really to be recommended to those who seek a sound, well written and far-reaching introduction.

This monograph is a self-contained advanced introduction to the theory which is consistently supplied with numerous physical examples... It will be suitable for graduate students interested in the control of linear and nonlinear systems as well as for researchers and practicing control engineers who are interested in applying this theory in their applications.

From the reviews of the second edition:

The monograph under review gives a comprehensive mathematical introduction to the analysis and control of systems with dissipative properties... The book concludes with an appendix summarizing essential mathematical background material and a rather comprehensive bibliography containing over 500 references... In summary, this book is a highly readable, authoritative, and comprehensive introduction to the theory of dissipative input-output systems... the authors make regular and recurring references to physical examples so as to effectively motivate the material.