The Interpretation of the New Testament in Greco-Roman Paganism (eBook, PDF) 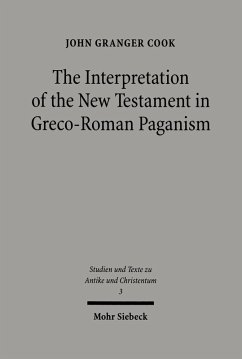 The Interpretation of the New Testament in Greco-Roman Paganism (eBook, PDF)

Andere Kunden interessierten sich auch für
Produktbeschreibung
Recent New Testament scholarship has raised the question of the effect of the New Testament on readers including an 'implied' reader. How did the New Testament affect ancient readers who rejected it? John Granger Cook contributes to the ongoing investigation of the relationship between Christianity and Greco-Roman antiquity. He addresses the response to the New Testament in the following authors: Celsus, Porphyry, the anonymous philosopher of Macarius Magnes, Hierocles, and Julian the Apostate. These authors are readers who found the New Testament to be a rejection of values they took to be fundamental in Greco-Roman culture. The works of these pagans exist in fragments preserved by Christian apologists who attempted to respond to their critique of Christian texts and practices. The doctrine of the resurrection, for example, contradicts the belief in reincarnation and an immortal bodiless soul. Apocalyptic texts rejected the eternity of the universe. Jesus was considered to be inferior to the heroes of Hellenistic culture such as Apollonius of Tyana who conducted themselves as philosophers should. Pagans were disturbed by the ability of Christian language to persuade people to join the movement. Both pagans and Christians made use of apologetic techniques designed to attract people to their respective positions. Rhetoric and literary criticism were tools that both used in their ongoing arguments. John Granger Cook makes use of these tools to analyze the texts of the pagan readers of the New Testament.