A Compendium of Fun 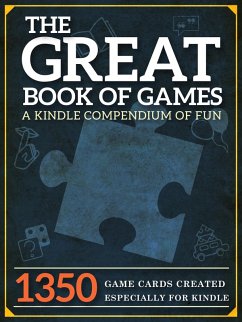 A Compendium of Fun

"Life is more fun if you play games." ¿ Roald Dahl, My Uncle Oswald
This compendium brings together a selection of the very best games. There are parlour games, travel games, trivia games, riddles, puzzles and more. Traditional family favourites feature alongside an array of newly created games.
The centrepieces of this collection are the six games:
Descriptionary, Just a Minute, Lost for Words, Ultimate Charades, Quick Draw, and Trivial Disputes.
In total, these six games alone include 1350 game cards (one e-reader page each). Most of the cards offer multiple gameplay options, so…mehr

This compendium brings together a selection of the very best games. There are parlour games, travel games, trivia games, riddles, puzzles and more. Traditional family favourites feature alongside an array of newly created games.

The centrepieces of this collection are the six games:

In total, these six games alone include 1350 game cards (one e-reader page each). Most of the cards offer multiple gameplay options, so you can return to them again and again. These games require no set-up time, and can be instantly enjoyed with friends or family wherever you are.

At Elsinore Books we pride ourselves on creating beautiful e-books, and devote great attention to formatting, and ease of navigation. This book contains a cleanly-styled contents page that permits easy movement between games. Each game occupies its own chapter, so you can move between games by pressing a single button on your e-reader.

You can view a full listing of the games inside by clicking on the preview of this book and viewing the contents page. Some of the collection highlights are outlined below:

Descriptionary: Players aim to describe as many words as possible in a 30-second time limit. 300 game cards are included. Each card has five words, one in each of the following categories: Places, Objects, Nature, Adjectives, and Random.

Just a Minute: The popular game where players have to speak on a given topic for one minute without hesitation, repetition or deviation. 250 games cards are included. On each card players will find three topics to choose from.

Ultimate Charades: Ultimate charades brings together elements of three games: classic charades, reverse charades, and adverbs. It's a great game for families to enjoy together. You'll find 200 cards here, each offering a choice of three options. Players will act out the titles of films, books, songs, and TV programmes, as well as proverbs, actions, famous people, and fictional characters.

Quick Draw: A sketch-off, where artists from each team race to depict words and phrases. There are 400 drawing challenges, spread across five categories: People and Animals, Things, Creative Works, Idioms, and Challenges.

Trivial Disputes: A general knowledge listing quiz that can be played in teams or with everyone out for themselves. Among the things players must put in order: buildings by size, animals by weight, cars by top speed, films by box-office profits. There are 100 Cards, divided into ten games.

Five complete chapters from The Great Book of Riddles, also by Elsinore Books, are included in this compendium.

You'll have 50 of the finest riddles, puzzles and brainteasers to make your way through.

Here is one of the riddles you'll find inside:

The king's two bodyguards developed an ingenious method for assuring the king's safety. With the king standing between them, they would face in opposite directions; one looking to the west and the other to the east, but at the same time, and without the use of any reflective surfaces, they would both be able to observe the king clearly. How was this possible?