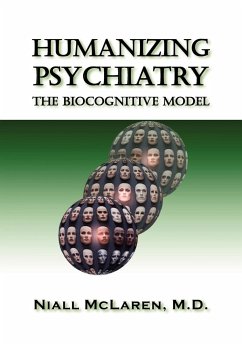 Does psychiatry have a future? Assailed from many directions, under constant attack for its reliance on "a drug for all problems" and increasingly unable to attract bright new trainees, the specialty is showing every sign of terminal decline. The reason is simple: modern psychiatry has no formal model of mental disorder to guide its daily practice, teaching and research. Unfortunately, the orthodox psychiatrists who control this most conservative profession are utterly antagonistic to criticism. Despite the evidence, they maintain a blind faith that "science will deliver the goods" by a…mehr

Andere Kunden interessierten sich auch für
Produktbeschreibung
Does psychiatry have a future? Assailed from many directions, under constant attack for its reliance on "a drug for all problems" and increasingly unable to attract bright new trainees, the specialty is showing every sign of terminal decline. The reason is simple: modern psychiatry has no formal model of mental disorder to guide its daily practice, teaching and research. Unfortunately, the orthodox psychiatrists who control this most conservative profession are utterly antagonistic to criticism. Despite the evidence, they maintain a blind faith that "science will deliver the goods" by a biological examination of the brain. This book argues that their faith is entirely misplaced and is contributing to the destruction of an essential part of civilized life, the fair and equitable treatment of people with mental disorders. The author offers a rational model of mental disorder within the framework of a molecular resolution of the mind-body problem. Fully developed, this model will have revolutionary consequences for psychiatry--and the mentally-afflicted. Acclaim for the writing of Niall Mclaren, M.D. "This book is a tour de force. It demonstrates a tremendous amount of erudition, intelligence and application in the writer. It advances an interesting and plausible mechanism for many forms of human distress. It is an important work that deserves to take its place among the classics in books about psychiatry." --Robert Rich, PhD, AnxietyAndDepression-Help.com "Dr. McLaren brilliantly wields the sword of philosophy to refute the modern theories of psychiatry with an analysis that is sharp and deadly. His own proposed novel theory could be the dawn of a new revolution in the medicine of mental illness." --Andrew R. Kaufman, MD, Chief Resident of Emergency Psychiatry, Duke University Medical Center "I found Niall McLaren's book to be an incredibly well-written and thoughtprovoking. It is not, by any means, easy reading. It is also not for someone who doesn't have some form of background in understanding the various psychological theories and mental health conditions. I think that this would make an excellent textbook for a graduate class that allows students to question the theories that we already have." --Paige Lovitt for Reader Views About the Author The author is a psychiatrist of some 35 years standing. He writes philosophy in the bush outside Darwin, northern Australia, with his family as critics. For six years, while working in Western Australia, he was the world's most isolated psychiatrist. For more information please visit www.FuturePsychiatry.com PSY018000 Psychology : Mental Illness MED105000 Medical : Psychiatry - General PHI015000 Philosophy : Mind & Body
Produktdetails
Produktdetails
Autorenporträt
Niall McLaren is an Australian psychiatrist, author and critic. He was born and educated in rural Western Australia, graduating in medicine at the University of WA in Perth in 1970. He completed his postgraduate training in psychiatry in 1977 and subsequently worked in prisons and then in the Veterans' Hospital, with a year's break working in the far southern region of Thailand. From 1983-87, he studied philosophy in order to undertake a PhD jointly in psychiatry and philosophy of science. In 1987, he left Perth city to travel to the remote Kimberley Region of Western Australia as the region's first psychiatrist. As a psychiatrist with no staff, no hospital beds, no clinic and not even an office, nearly 2000km from the nearest psychiatrist, he was the world's most isolated psychiatrist. While there, he continued studying and writing and began publishing work highly critical of mainstream psychiatry. After six years in the bush, he moved to Darwin, the capital of Australia's Northern Territory, first as chief psychiatrist for the Top End, then in private practice, where he concentrated on the large military population. He has since moved to Brisbane, in Queensland, and is emphatic that there will be no more moves. His work is highly original and he does not admit to any intellectual debt to psychiatrists, living or dead. When he graduated in psychiatry, he was aware that the field was not what it claimed to be. It was clear that psychiatrists routinely made major claims on the nature of mind and of mental disorder that were not justified in the literature and, he intuited, could never be justified. This led him to the philosophy of science which established that psychiatry lacked a formal model of mental disorder. In turn, this problem arose just because it had no model of mind. As a result, modern psychiatry lacks a basis in any known concept of science. It is, in fact, at best a proto-science and, at worst, crude and highly misleading pseudoscience. Almost invariably, his work provokes bitter antagonism from mainstream psychiatrists. Over the past forty years, orthodox psychiatry has committed itself totally to the reductionist biological approach to mental disorder, with no possible alternatives. Despite massive increases in expenditure on mental health, there is absolutely no evidence to support the oft-repeated claims that psychiatry is making great advances and people are better off than they have ever been. Every figure indicates that as psychiatry extends its reach, the mental health of the population declines. McLaren argues that this is just because psychiatry is not a science. Because it lacks a formal model of its field of study, mental disorder, psychiatry is perpetually at the mercy of social and political fads and fashions. He maintains that biological psychiatry is nothing more than a passing fad and must eventually go the way of psychoanalysis, behaviourism and possession theory. In the meantime, it is doing an immeasurable amount of damage.
Kundenbewertungen
Schreiben Sie eine Kundenbewertung zu diesem Produkt und gewinnen Sie mit etwas Glück einen 15,- EUR bücher.de–Gutschein!
Bewertung schreiben Bewertung schreiben
Bewertung schreiben Bewertung schreiben