Empractical and Conversational Listening and Speaking 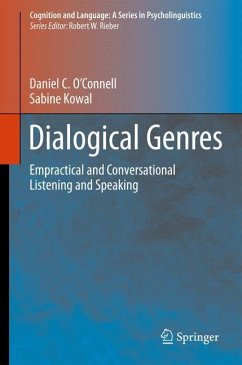 Empractical and Conversational Listening and Speaking

This work gives a thorough revision of history through a psychological approach to verbal interaction between listeners and speakers. This book offers a large amount of information on the psychology of language and on psycholinguistics, and focuses on a new direction for a psychology of verbal communication. Empirical research includes media interviews, public speeches, and dramatic performances.
What happens in everyday dialogue? The authors revert to a rich prehistory to answer this question: Philipp Wegener in the late 19th and Karl Bühler in the first half of the 20th century in the…mehr

Andere Kunden interessierten sich auch für
Produktbeschreibung
This work gives a thorough revision of history through a psychological approach to verbal interaction between listeners and speakers. This book offers a large amount of information on the psychology of language and on psycholinguistics, and focuses on a new direction for a psychology of verbal communication. Empirical research includes media interviews, public speeches, and dramatic performances.What happens in everyday dialogue? The authors revert to a rich prehistory to answer this question: Philipp Wegener in the late 19th and Karl Bühler in the first half of the 20th century in the German traditions of philology and psychology. Their work culminated in the concept empractical speech. This groundbreaking book opens up a new view of language use in settings in which participants are primarily involved not in speaking but in some non-linguistic activity and in which the need for speech arises only occasionally. Behold empractical speech, a genre unto itself with respect to conversation an ubiquitous phenomenon of everyday life and the very setting of early language acquisition. The historical, theoretical, and empirical approaches of Dialogical Genres establish differences between empractical and conversational speech. The authors theoretical orientation is psychological. Their empirical methodology is quantitative and qualitative analysis of excerpts from feature films. Salient topics include: A revisionist history of psycholinguistic. Differences between empractical and conversational speech: more silence, fewer speaker changes, less syntactic structure. Psychological principles of all spoken dialogue: intersubjectivity, perspectivity, open-endedness, verbal integrity. Social responsibility of listeners and speakers. Psychologists and other social communication scientists will find Dialogical Genres rewarding and provocative. This precise and nuanced book explores and situates one of the core features of the life of speech empractical speech that has been shunted aside by late 20th century theorists; it continues the work of the great masters, especially Philipp Wegener and Karl Bühler. With supplementary and rich contemporary means it reconfigures our ways of viewing a whole dimension of the life of language and the speakers and listeners who animate it and are animated by it. O Connell and Kowal have blended historical, theoretical, and empirical sides of their investigation into an elegant unity Robert E. Innis, Ph.D., University of Massachusetts Lowell, MA, USA This book gives back to situational context the primacy it had in Philipp Wegener s and Karl Bühler s theories of language and communication. The focus is on empractical speech -- speech embedded in nonlinguistic activities. In this prototype of language use, language, action and context provide the threedimensional space of meaning-making. In this process the listener is as important as the speaker, and silences are as important as words. This book is for everybody who wants to understand how language is put to work socially, practically, and interactionally in everyday life. Language does not exist. It happens Brigitte Nerlich, Ph.D., DLitt, University of Nottingham, UK
Produktdetails
Autorenporträt
The authors are experimental psychologists who have been engaged in research together for more than 40 years now.  Dan O'Connell studied at St. Louis University and did doctoral work at the University of Illinois (Champaign/Urbana); Sabine Kowal studied at the Free University of Berlin and did doctoral work at St. Louis University.  O'Connell's career was at St. Louis, Loyola of Chicago, and Georgetown Universities, while Kowal's was at both the Technical University of Berlin and the Anna Freud Oberschule in Berlin.  For many years, the team was oriented toward mainstream psycholinguistics and experimental research on speech production.  Throughout the last decades of the 20th century, their interest shifted to spontaneous spoken discourse under field observational conditions.  This shift had as its origin their observation that professional speakers known for their eloquence in public dialogue violate both ideal delivery and syntactic well-formedness - concepts established in mainstream psycholinguistics as norms for effective communication.  O'Connell and Kowal have ascribed the use of these norms to a written language bias and have accordingly turned their attention - both empirically and theoretically - to the use of genuine spoken discourse.  Radio and TV political interviews have provided much of the empirical database for their recent research, and their emphasis on spontaneous spoken discourse has led to the investigation of neglected speech phenomena such as fillers, pauses, interjections, and laughter in both English- and German-language corpora.  In recent decades too, they have become interested in criteria for adequate transcription of spoken dialogue, especially in light of irreconcilable differences between orality and literacy; their interest has also extended to revisionist approaches to the history of psycholinguistics.  The present book itself applies new methods of analysis to corpora of empractical and conversational speech derived from American feature films.  As an ubiquitous everyday genre of spoken dialogue, empractical speech demands empirical recognition.
Inhaltsangabe
Part I: Taxonomoy and selectivity.- Historical sources: Credit where credit is due.- An historical search for genres of spoken dialogue.- An empirical search for genres of spoken dialogue.- Part II: Theoretical considerations of empractical speech.- Empractical speech: The forgotten sibling in spoken dialogue.- Time - Arbiter of continuity.- Listener roles in genres of spoken dialogue.- Social responsibility in spoken dialogue.- New directions.- Epilogue.
Kundenbewertungen
Schreiben Sie eine Kundenbewertung zu diesem Produkt und gewinnen Sie mit etwas Glück einen 15,- EUR bücher.de–Gutschein!
Bewertung schreiben Bewertung schreiben
Mehr zum Thema
Mehr aus der Kategorie Fachbücher > Geisteswissenschaften > Sprachwissenschaft & Philologien > Bereiche