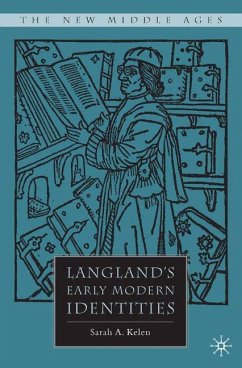 This book uses the methodologies of cultural studies and the history of the book to show how editors and readers of the Sixteenth through the early Nineteenth century successively remade Piers Plowman and its author according to their own ideologies of the Middle Ages.

Andere Kunden interessierten sich auch für
Produktbeschreibung
This book uses the methodologies of cultural studies and the history of the book to show how editors and readers of the Sixteenth through the early Nineteenth century successively remade Piers Plowman and its author according to their own ideologies of the Middle Ages.
Produktdetails
Autorenporträt
Sarah A. Kelen is Associate Professor of English at Nebraska Wesleyan University, USA.
Inhaltsangabe
Introduction: Langland as an Early Modern Author Chapter 1: The Birth of Langland Chapter 2: A Proliferation of Plowmen Chapter 3: Langland Anthologized Chapter 4: Langland Recontextualized Chapter 5: Fictions of Authorship, Fictions of English Literature
Rezensionen
"This volume is well researched and thorough, and seems unlikely to be replaced any time soon as a critical guide to these materials." - Sixteenth Century Journal

"Palgrave's New Middle Ages series, under the editorship of Bonnie Wheeler, continues to publish some of the best new work on medieval literature, history and culture, and Sarah Kelen's book enters this lineup as an admirable contribution to reception-history by tracing the ways that Langland's Piers Plowman has been understood among readers from the Reformation to the early twentieth century...Kelen's book is packed with interesting information, rich in critical insights, and steadily informed by a generous review of current criticism as well as primary sources." - The Medieval Review

"This is a wonderfully fresh and scrupulous guide to, and reflection on, the early modern reception history of Piers Plowman and its maker. Kelen s balanced, witty, and clear treatment of how critics, writers, editors and anthologies have shaped and commented on the poem and the poet provides a vademecum for medievalists wishing to reflect on the development of their materials and assumptions. And like the best studies of medievalism, Kelen s study also offers a new perspective on post-medieval literary and critical history. This is a quietly fascinating guide to a major branch of scholarly and literary postures and outlooks from the Renaissance through the Romantics, which leaves the poem itself freshly mysterious even while showing how it was the center of so many forms of appropriation."-Andrew Galloway, Cornell University

"A perceptive, broad-ranging study. Kelen provides us with an original history of how Piers Plowman and its more shadowy author William Langland were valued by later writers: early on, Piers Plowman was indeed far more widely read, and in contrast with most other medieval writings but in company Chaucer's, it continued to be copied, reprinted and read up to the present day. Her book provides valuable new insight into the English literary tradition, its varied rather than univocal modes of emulation, and its often conflicted canonization processes." - Fiona Somerset, Duke University

"Who was William Langland? Sarah A. Kelen s history of Langland s reception from the Renaissance to the early nineteenth-century carefully delineates the ideological pressures shaping the surprising variety of possible answers to this question in early modern England. More than a guide to the afterlife of Piers Plowman, Langland s Early Modern Identities offers an important vantage point from which to view early modern medievalism. One need not be a Langland specialist nor an early modernist to appreciate the view. Indeed, Langland s relative obscurity, both to early moderns and to us, is what makes Kelen s account so compelling. For Kelen, Langland is less a subject in his own right than a vehicle for exploring just how it is we come to know what we think we know about authors and texts alike." - Renaissance Quarterly
…mehr
Kundenbewertungen
Schreiben Sie eine Kundenbewertung zu diesem Produkt und gewinnen Sie mit etwas Glück einen 15,- EUR bücher.de–Gutschein!
Bewertung schreiben Bewertung schreiben
Mehr zum Thema