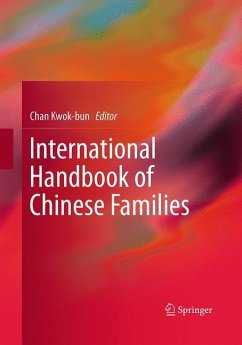 Families are the cornerstone of Chinese society, whether in mainland China, in Taiwan, Hong Kong, Macao, Singapore, Malaysia, or in the Chinese diaspora the world over. Handbook of the Chinese Family provides an overview of economics, politics, race, ethnicity, and culture within and external to the Chinese family as a social institution. While simultaneously evaluating its own methodological tools, this book will set current knowledge in the context of what has been previously studied as well as future research directions. It will examine inter-family relationships and politics as well as…mehr

Andere Kunden interessierten sich auch für
Produktbeschreibung
Families are the cornerstone of Chinese society, whether in mainland China, in Taiwan, Hong Kong, Macao, Singapore, Malaysia, or in the Chinese diaspora the world over. Handbook of the Chinese Family provides an overview of economics, politics, race, ethnicity, and culture within and external to the Chinese family as a social institution. While simultaneously evaluating its own methodological tools, this book will set current knowledge in the context of what has been previously studied as well as future research directions. It will examine inter-family relationships and politics as well as childrearing, education, and family economics to provide a rounded and in-depth view.
Produktdetails
Autorenporträt
Chan Kwok-bun is Chair Professor of Sociology, Hong Kong Baptist University. He was former President, Hong Kong Sociological Association; former Head, Department of Sociology, and former Director, David C. Lam Institute for East-West Studies, Hong Kong Baptist University. Between 2005 and 2008, Professor Chan has published seven books, and since 2005 has been the Editor of Social Transformations in Chinese Societies (Leiden: Brill Academic Publishers), the official journal of The Hong Kong Sociological Association. His current research interests are in families in Chinese societies, Chinese business networks and Chinese capitalism; Chinese ethnic identities; migration, transnationalism, cosmopolitanism, and diasporas.
Inhaltsangabe
A family affair: Migration, dispersal, and the emergent identity of the Chinese cosmopolitan.- The politics of migrant family drama: Mainland Chinese immigrants in Singapore.- Re-forming family among re-migrants:Hongkongers come home.- Social networks and family relations in return migration.- The uncanny feeling of homely and unhomely: gender and generation politics in return migrant families in Hong Kong.- A double-eged sword: Mobility and entrepreneurship.- Family and marriage: constructing Chineseness among long-settled Australian-born Chinese.- Families in the Chinese diaspora: Women's experience.- Female university students dreamning of becoming housewives.- Stepping out, stepping in.- The prejudicial portrayal of immigrant families from mainland China in the Hong Kong media.- To be or not to be: Chinese-Singaporean women deliberating on voluntary childlessness.- Fertility transition and the transformation of working-class family life in urban China in the 1960s.- Sex preference for children and fertility behavior of Chinese-Americans.- Social stratification and childrearing values in contemporary China.- Support and care for aging Chinese: A comnparison of Guangzhou, Hong Kong, and Taipei.- Intimacy and its denial: When sons and daughters talk about fatherhood, marriage, and work.- Father, son, wife, husband: Philanthropy as exchange and balance.- Children and their fathers in Singapore: A generational perspective.- Moving fathers from the "sidelines": Contemporary Chinese fathers in Canada and China.- Listening to fathers.- The roles and contributions of fathers in families with school-age children in Hong Kong.- East and West: Exploration of the father-son conflict in Chinese culture from the perspective of family triangulation in the West and the classical opera stories of the East.- Family through the eyes of the youth.- Art and heart.- Privacy in the family.- Age and gender differences in Chinese-Filipino parent-adolescent conflict, family cohesion and autonomy.- Setting out conditions, striking bargains: Marriage-stories and career development among university-educated women in Hong Kong.- Financial risk tolerance of Chinese American families.- Gender equality in families in Shanghai.- Economic transition and the potential risks of marital instability in contemporary urban China.- Empowered or impoverished: A study of divorce and its effects on urban women in contemporary China.- Men inside, women outside?.- Hong Kong lesbian partners in the making of their own families.- Immigrant adaptation, poverty and the family: New arrivals in Hong Kong from mainland China.- Researching migrant Chinese families in Hong Kong: Changing perspectives and methodologies.- The one-child policy and its impact on Chinese families.- "The youth problem" is not a youth problem.- Meditations of two perpetual outsiders on 'Chineseness' and 'The Family'.
Rezensionen
From the book reviews: "The handbook has rich information about issues related to Chinese families living in diverse geographical areas around the world. The book is of interest to readers who are interested in Chinese culture, family policy, and family issues. The contents are accessible to both experienced researchers and general public who are interested in the Chinese culture. The book can be used as a reference for both graduate and undergraduate courses in Chinese studies and any related social science courses." (Jing Jian Xiao, Journal of Family and Economic Issues, Vol. 35, 2014) "Sociologist Chan (Hong Kong Baptist Univ.) brings together 41 interdisciplinary scholars to offer a comprehensive examination of Chinese families in mainland China, Hong Kong, Singapore, Taiwan, Australia, Canada, and the US. ... this is an important contribution to sociology of the family, and widely accessible to readers who want to learn more about Chinese families from different perspectives. Summing Up: Highly recommended. All levels/libraries." (M. C. Cheng, Choice, Vol. 50 (11), August, 2013)
Kundenbewertungen
Schreiben Sie eine Kundenbewertung zu diesem Produkt und gewinnen Sie mit etwas Glück einen 15,- EUR bücher.de–Gutschein!
Bewertung schreiben Bewertung schreiben
Mehr zum Thema