On the Internationalization of Islamist Terrorism 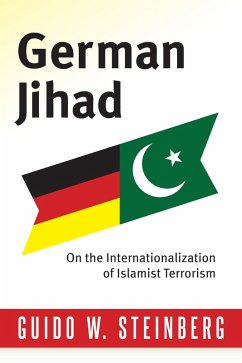 On the Internationalization of Islamist Terrorism

Since 2007, the German jihadist scene has become Europe's most dynamic, characterized by an extreme anti-Americanism, impressive international networks, and spectacularly effective propaganda. German jihadists travel to Turkey, Chechnya, Pakistan, and Afghanistan, trading jihadist ideologies and allying themselves with virulent organizations. Mapping the complicated interplay between jihadists' personal motivations and the goals and strategies of the world's major terrorist groups, Guido W. Steinberg provides the first analysis of German jihadism, its links to Turkey, and its growing, global…mehr

Steinberg follows the formation of German-born militant networks in German cities and their radicalization and recruitment. He describes how these groups join al-Qaeda-affiliated organizations in Afghanistan and Pakistan, such as the Islamic Jihad Union, the Islamic Movement of Uzbekistan, and the Taliban, and he plots the path that directly involves them in terrorist activities. Situating these developments within a wider global context, Steinberg interprets the expanding German scene as part of a greater internationalization of jihadist ideology and strategy, swelling the movement's membership since 9/11. Increasing numbers of Pakistanis, Afghans, Turks, Kurds, and European converts are coming to the aid of Arab al-Qaeda, an incremental integration that has worrisome implications for the national security of Germany, the United States, and their allies.