Seeking Peace in El Salvador: The Struggle to Reconstruct a Nation at the End of the Cold War 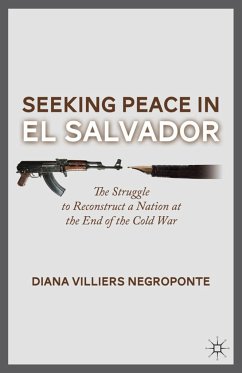 Seeking Peace in El Salvador: The Struggle to Reconstruct a Nation at the End of the Cold War

The resolution of the civil war in El Salvador coincided with the end of the Cold War. After two years of negotiations and a decade-long effort to implement the peace accords, this work examines how peace was made and whether it has endured.

Andere Kunden interessierten sich auch für
Produktbeschreibung
The resolution of the civil war in El Salvador coincided with the end of the Cold War. After two years of negotiations and a decade-long effort to implement the peace accords, this work examines how peace was made and whether it has endured.

Produktdetails
Autorenporträt
Diana Villiers Negroponte is a non-resident Senior Fellow at The Brookings Institution, USA.
Inhaltsangabe
Theoretical Issues in El Salvador's Peace Process
Ancient Conflicts Modern Violence: The Causes And Context for Civil War
Internal Forces Struggle to Resolve the Civil War PartI the FMLN
Internal Pressures for Ending Salvador's Civil War PartII the Jesuits and ARENA
The United States: Protagonist or Mediator?
External Influences on the Negotiations To End the War in El Salvador
Introducing the United Nations
Four Critical Moments in the Negotiations
Implementation of the Chapultepec Accords: The Achievements
Challenges to the Peace Accords
Rezensionen
"Diana Negroponte has crafted a mosaic of how international relations and diplomacy interacted with deep political and societal division in the three year effort, amid armed conflict, to bring peace to El Salvador. It is organized clearly, written beautifully, and documented superbly. It re-creates the Salvadoran drama launched in 1989 - the failed FMLN final offensive and the murder of the Jesuits - in the midst of changing world power and the driving desire of the United States to get Moscow to help get El Salvador resolved. Within the telling, it is a model of analysis. This riveting book draws the reader into and through the stages that brought about a workable peace agreement. It has lessons for today on how to unwind conflict to get to peace. Plus, the narrative and the colorful characters, in their own words and quotes, as woven by an exceptional writer with an economical style, give it the feel of a cracking good novel." - John Maisto, US ambassador and deputy assistant secretary of state for Central America (1992-1993)

"Diana Negroponte examines the arduous process of negotiating and implementing El Salvador's peace accord, dissecting the interests and motives of the warring sides as well as actors in the international community. In mapping the uneasy co-existence of democratization and new forms of violence, she explores the new and sometimes unforeseen challenges that arose in the post-war era. This is a sobering book as well as an invaluable contribution to the literature on conflict resolution and peace building." - Cynthia Arnson, director for Latin American Studies, Woodrow Wilson International Center for Scholars

"As the Cold War gave way to deepening globalization, Salvadorans struggled to end a bloody civil war. Diana Negroponte details how global powers, international institutions, polarized national forces, and struggling communities jostled to end the war and build a new regime. Equally important, she shows how inattention to social reform and judicial independence, along with the inability to build an inclusive economy, led to a post-war democracy shaped by extreme inequality and the violence of gangs and drug cartels. Essential to understanding contemporary El Salvador, this study offers a cautionary tale of how successful peacemaking and regime building left a majority in misery and facing new ways of violence." - John Tutino, professor of History and International Affairs, Georgetown University

"This is a richly textured and balanced analysis of El Salvador's peace settlement and its complex aftermath. It neatly illuminates the remarkable feats of brinkmanship that were required to put an end to the conflict and the critical role played by external actors in that process. It also shows how in Central America the end of the civil wars was merely the conclusion of the first act in the journey towards democracy. The isthmus continues to stagger under the weight of flawed democratic institutions, deeply rooted social imbalances, and astonishingly high levels of crime. This book is a very welcome addition to the literature on Central America's ongoing travails." - Kevin Casas-Zamora, senior fellow in Foreign Policy and the Latin America Initiative, The Brookings Institution

"In time for the 20th anniversary of the end of El Salvador's decadelong civil war, Negroponte has written a detailed and nuanced account of the negotiations that led to peace... Skipping over the war itself, the book focuses on the dynamics of the peace process. Negroponte argues convincingly that success resulted from a confluence of circumstances: with the end of the Cold War, the United States and the Soviet Union lost interest in fueling a proxy fight; the Salvadoran government and the guerrillas had fought to a 'hurting stalemate,' in which neither had any prospect of military victory; and the negotiations were aided by skillful external mediators, especially the UN diplomat Alvaro de Soto. Negroponte notes that the Uni…mehr
Kundenbewertungen
Schreiben Sie eine Kundenbewertung zu diesem Produkt und gewinnen Sie mit etwas Glück einen 15,- EUR bücher.de–Gutschein!
Bewertung schreiben Bewertung schreiben