The Transformation of Extremism 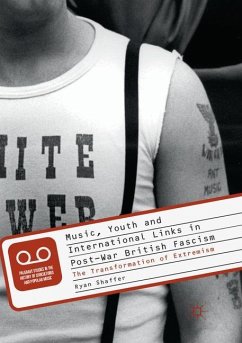 The Transformation of Extremism

This book examines the domestic evolution and international connections of post-war fascists in the UK. It argues that post-war British fascism became transnational as the radicals increasingly exchanged ideas, money and culture with like-minded foreigners. Using interviews with key figures in several countries, this book traces the history of the National Front (NF) and British National Party (BNP), focusing on the political parties' youth, music and international outreach. It explores how British fascism grew into an international movement, how fascist youth developed skinhead music as a…mehr

Andere Kunden interessierten sich auch für
Produktbeschreibung
This book examines the domestic evolution and international connections of post-war fascists in the UK. It argues that post-war British fascism became transnational as the radicals increasingly exchanged ideas, money and culture with like-minded foreigners. Using interviews with key figures in several countries, this book traces the history of the National Front (NF) and British National Party (BNP), focusing on the political parties' youth, music and international outreach. It explores how British fascism grew into an international movement, how fascist youth developed skinhead music as a conduit for their ideas, and how some of those key figures made international connections with people in Iraq, Libya, Syria and the United States. Moreover, it also draws from rare internal party documents, law enforcement records and membership lists to track foreign funding and the parties' domestic electoral growth. For the first time, this book gained access to both the leadership and rank-and-file of the BNP and NF to explore its culture and international connections. In doing so, it shows the successes, failures and changes that have made British fascism a force in the international extremist subculture.
Produktdetails
Autorenporträt
Ryan Shaffer is an historian and writer. His academic work focuses on Asian and European history with particular interest in extremism and political violence. He has published over 150 articles, reviews and chapters about European and South Asian politics in popular magazines and scholarly journals.
Inhaltsangabe
1. Introduction.- 2. The Fascist Tradition, 1967-1977.- 3. Youth Against Tradition, 1977-1983.- 4. An International Youth Movement, 1983-1990.- 5. Building a Street Force, 1990-1999.- 6. Fascist Modernization, 1999-2005.- 7. The Fascist Peak and the Fascist Decline, 2005-2016.- 8. Conclusion.- Appendix.- Bibliography.- Index
Rezensionen
"An overdue in-depth historical examination of some of the more important developments to have taken place on the extreme right of underground British (and indeed global) politics in recent decades. Showcasing impressively exhaustive research, combining a wide-ranging study of primary published materials and a raft of interviews with key figures in the British neo-fascist subculture, this is an account that ably explains several important developments and rightly highlights the importance of transnational connections to contemporary forms of fascist politics." (Benjamin Bland, Journal of Contemporary History, Vol. 56 (2), 2021)

"A great addition to upper-level sociology, anthropology, musicology, political science, or social science courses looking to elevate the level of seriousness with which cultural forms like music are considered. This book may help politicians, policy makers, and youth community workers understand how nascent-and seemingly dead-ideologies return to life. Lastly, Shaffer's book may be of interest to fans of punk music and music in general, especially those who want to start to understand the slippery nature of politics exploiting music ... ." (Michael J. Lorr, Journal for the Study of Radicalism, Vol. 14 (1), 2020)

"For anyone with a deep interest and knowledge in British fascism of that period, this will be an essential source ... ." (Stephen Dorril, Journal of British Studies, Vol. 59 (1), 2020)

"Succeed[s] in ... demonstrating that the significance of post-war British fascism lies not so much in its domestic electoral context, but in the international context where it became, particularly so in the 1980s and 1990s, a genuine force in the international subculture of right wing extremism. ... Shaffer's study reveals how the more entrepreneurial of Britain's post-war fascists exploited music and youth subculture to take their messages of hate to the world." (Nigel Copsey, Politics, Religion & Ideology, Vol. 20 (1), 2019)

"One strength of Shaffer's book is the extensive interviews he carried out with NF and BNP leaders ... . the book is valuable for showing how fringe movements function, recruit, and negotiate the difficult waters of local and national politics." (Roland Clark, The Journal of the History of Childhood and Youth, Vol. 12 (2), 2019)

"Shaffer has made an important contribution to the study of British fascism. His empirical approach provides an invaluable, and very readable, guide to the many, tiny groups and splinter groups, as well as the variegated ideological trends, that have fostered this complex, marginalized movement from the 1960s to the present day." (Paul Jackson, History - The Journal of the Historical Association, Vol. 104 (360), March 6, 2019)

"Music, Youth and International Links in Post-War British Fascism is based on an impressive body of interviews carried out by the author with some of the main figures of British anti-Fascism and Fascism. ... These new interviews mark the book as a valuable contribution to the field, next to other well-established studies of postwar British Fascism by scholars such as Nigel Copsey and Graham Macklin." (Liam J. Liburd, History - Reviews of New Books, Vol. 46 (5), 2018)