Cuban Identity and the Angolan Experience 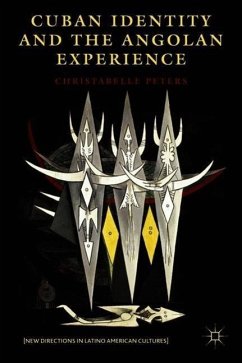 Cuban Identity and the Angolan Experience

Exploring the cultural politics of Cuba's epic military engagement in the Angolan civil war, this book narrates the transformation of Cuban national identity from Latin African to Caribbean through the experience of internationalism in Angola.

Andere Kunden interessierten sich auch für
Produktbeschreibung
Exploring the cultural politics of Cuba's epic military engagement in the Angolan civil war, this book narrates the transformation of Cuban national identity from Latin African to Caribbean through the experience of internationalism in Angola.
Produktdetails
Autorenporträt
Christabelle Peters is a visiting research fellow at the Centre for Research on Cuba at the University of Nottingham.
Inhaltsangabe
PART I: SEPARATION Slave Nostalgias The Public Lives of Santería The Map of Africanía: Part One PART II: TRANSITIONS Rituals of War Return of the Slaves The Map of Africanía: Part Two PART III: INCORPORATION 'One Caribbean Sun' The Map of Africanía: Part Three
Rezensionen
"This work by Christabelle Peters is cutting-edge. It examines Cuba's seminal involvement in Angola not as an issue of foreign relations, but as one that transformed Cuba's identity from a race-ambivalent Latin American nation to a Caribbean one that sees itself as part of what Peters coins 'Africania.' Further, Peters' innovative Cultural Studies/Post-Colonial probe takes Cuban race studies into new, innovative, and imaginative analytical spaces, beyond the traditional disciplines of history, sociology, anthropology, and polemics. The field is richer because of this work."

Lisa Brock, The Arcus Center for Social Justice Leadership, Kalamazoo College, co-editor, Between Race and Empire: African-Americans and Cubans Before the Cuban Revolution

"It has long been assumed that Cuba's post-1975 Angolan involvement changed Cubans' treatment of the question of race and identity; this book now confirms that absolutely, but does so with a subtlety of touch, a wealth of sources and evidence, and a depth of understanding which all recognize the complexity and delicacy of the issues. As a result, the author takes us far beyond the often superficial interpretations and stereotypes which are all too often given for those 'big' questions in Cuba race, identity, cultural politics, and Cuba's whole African dimension and gives us a long-overdue and welcome exposition of a multi-layered reality."

"Using methods as eclectic as the interpretations they inspire, Christabelle Peters offers a fascinating and compelling exploration of the multiple, yet connected ways in which revolutionary Cuba imagined and engaged Africa in the 1970s and beyond. Cuban Identity and the Angolan Experience is a boldly pioneering work on a number of fronts."