How the Great Recession Transformed American and European Politics 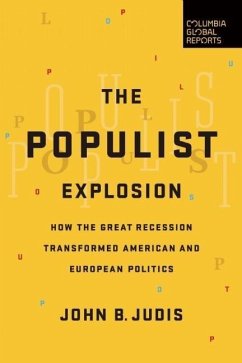 How the Great Recession Transformed American and European Politics

"Far and away the most incisive examination of the central development in contemporary politics: the rise of populism on both the right and the left...Judis demonstrates the crucial role of the 2008 recession in discrediting the neoliberal agenda. This is must reading."- Thomas Edsall, New York Times columnist
A Fareed Zakaria GPS Book of the Week: "An intelligent guide to a phenomenon by no means over." -- Fareed Zakaria, CNN
"Well-written and well-researched, powerfully argued and perfectly timed." - The Economist
What is populism? And why have populist parties and candidates…mehr

Andere Kunden interessierten sich auch für
Produktbeschreibung
"Far and away the most incisive examination of the central development in contemporary politics: the rise of populism on both the right and the left...Judis demonstrates the crucial role of the 2008 recession in discrediting the neoliberal agenda. This is must reading."- Thomas Edsall, New York Times columnist

"Well-written and well-researched, powerfully argued and perfectly timed." - The Economist

What is populism? And why have populist parties and candidates suddenly sprung up and even gained power in the United States and Western Europe? The emergence of Bernie Sanders and Donald Trump, France's Marine LePen, Podemos in Spain, Syriza in Greece, and the Alternative for Germany are signs that an older consensus about politics and government is breaking down.

John B. Judis, one of America's most respected political analysts, tells us why we need to understand the populist movement that began in the United States in the 1890s and whose politics have recurred on both sides of the Atlantic ever since. The Populist Explosion is essential reading for anyone hoping to grasp a global political system that is only just beginning what will be a long-running and highly consequential readjustment.

Named one of the Best Books of 2016 by Bloomberg

Produktdetails
Autorenporträt
Judis, John B.§John B. Judis is Editor-At-Large at Talking Points Memo and author of many books, including The Socialist Awakening: What's Different Now About the Left, The Nationalist Revival: Trade, Immigration, and the Revolt Against Globalization, Genesis: Truman, American Jews, and the Origin of the Arab-Israeli Conflict and The Emerging Democratic Majority, cowritten with Ruy Teixeira. He has written for numerous publications, including The New Republic, The National Journal, The New York Times Magazine and The Washington Post Magazine. Born in Chicago, he received his B.A. and his M.A. degrees in Philosophy from the University of California, Berkeley. He lives in Silver Spring, MD.
Rezensionen
Named one of "11 Books that Will Make You Smarter about Politics" by Business Insider

"If you read no other political book this year, read THE POPULIST EXPLOSION by John B. Judis, which brilliantly sets out the connection to present circumstances." -- Mark Mardell, BBC

"John B. Judis's The Populist Explosion was published just before Mr. Trump's election, but that improbable victory only confirms the book's thesis that Western democracies are in some ways failing to represent their citizens....Mr. Judis's analysis is sharp and engaging." - Barton Swaim, The Wall Street Journal

"Writing from the left, with a qualified admiration for the populist impulse, Judis contends that populist insurgencies historically have served as warning signs of larger brewing political crises." -- Tory Newmyer, Fortune

"A cogent and exceptionally clarifying guide to a political phenomenon that is at once elusive and, yes, explosive."-- Jonathan Alter, The New York Times Book Review

"Shows why journalists who have a sense of history, and its irony, need not be bewildered by the astonishing revolt against globalized elites in our time." -- Pankaj Mishra, Bloomberg

"The Populist Explosion is far and away the most incisive examination of the central development in contemporary politics: the rise of populism on both the right and the left. John Judis, whose track record is unrivaled, is the ideal author to tackle the subject, and he has done a superb job, placing contemporary trends, including the rise of Donald Trump, in historical perspective. Judis demonstrates the crucial role of the 2008 recession both here and in Europe in discrediting the neoliberal agenda. This is must reading."-- Thomas Edsall, New York Times columnist

"A sweeping narrative -- rich in historical and political argument -- that ably ties together the insurgencies on both sides of the Atlantic."-- The Nation

"John Judis, in The Populist Explosion, has written a terrific short book that is a brisk tour of the horizon, of the right and left versions of populism, their history and current state, with a useful comparison of the populist upsurge in the United States and Europe."--The American Prospect

"The Populist Explosion blends groundbreaking reporting with insightful scholarship in the best guide yet to the most important political phenomenon of our time."--Michael Lind, author of Land of Promise: An Economic History of the United States

"John Judis demonstrates again why he is one of America's best political journalists. There is no wiser or better informed analysis of contemporary voter discontent on both sides of the Atlantic than The Populist Explosion."-- Michael Kazin, editor of Dissent, author of The Populist Persuasion: An American History and War Against War: The American Fight for Peace, 1914-1918

"What does history tell us about the future? John Judis, the author of THE POPULIST EXPLOSION, says that America may be just in the first phase of its new populist insurrection." - Sydney Morning Herald,