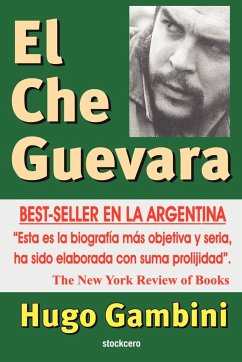 Known Che's death, opinions of all kinds were heard about his personality. From the most calculating to the most compromising. One, that of the late confessor of Eva Perón, Father Hernán Benítez, impresses with his absolute frankness: "Spending your life in the jungle, hungry ... with your head at a price and facing overwhelming warlike power ... this is heroism of law, however rash his ideas might be ... Failure to acknowledge it would be stupid "; the priest is exalted. The popular journalist author of this biography of the Argentine-Cuban revolutionary - whose first edition is from 1968 -…mehr

Andere Kunden interessierten sich auch für
Produktbeschreibung
Known Che's death, opinions of all kinds were heard about his personality. From the most calculating to the most compromising. One, that of the late confessor of Eva Perón, Father Hernán Benítez, impresses with his absolute frankness: "Spending your life in the jungle, hungry ... with your head at a price and facing overwhelming warlike power ... this is heroism of law, however rash his ideas might be ... Failure to acknowledge it would be stupid "; the priest is exalted. The popular journalist author of this biography of the Argentine-Cuban revolutionary - whose first edition is from 1968 - traces in it the formative stage of childhood and the anti-Peronist feelings of adolescence; the wild adventure of touring Latin America on a motorcycle and Guevara's anti-Yankee irritability at the fall of President Arbenz of Guatemala, attributable to the White House. The narrative follows the doctor-turned-fighter, submachine gun, and asthma in tow, during the Sierra Maestra odyssey, healing the wounded, assisting miserable peasants, and deepening Marxist readings on truces. More novel than truthful seems the triumphant entry into Havana of the ragged rebels, after Batista fled and his troops dispersed. The author documents Guevara's visit to Third World countries and his adherence to the prevailing statist system in them. Increasingly imbued with Leninist faith, indefatigable in his leadership, Che improvises Minister of Economy and, later, of Industry, once the technicians who have preceded him in both portfolios have been defeated - to accelerate revolutionary construction. The Punta del Este conference, planned by Castro's negotiating will, leads to Che's interview, in Buenos Aires, with President Frondizi, and his dismissal by a coup sector of the armed forces. Gambini outlines, through dialogues, the differences between Guevara and Castro. While the Argentine insists on giving the new regime an ideological content - Marxism adjusted to the peculiarities from a Caribbean island - the head of the realistic political movement, enters into an alliance with the Bolshevik leaders of Soviet Russia. reciprocity of interests. The Christian Democrat and anti-communist revolutionary hero Camilo Cienfuegos remains in the shadows and the author has preferred to leave his mysterious disappearance between doubt and suspicion. Gripped between Moscow revisionism and Maoism, the Cuban revolution loses autonomy. Che wants to take it with him, export it to Latin America, then to the world. "Let's not let the differences in the socialist field divide us," said Fidel. Gambini revives the Guevara who, to rescue the chimera of the "new man" and the "perfect society", exchanges ministries and honors for the guerrilla fighter's backpack and sinks in the forests of Bolivia. "Your father has been a man who acts as he thinks ..., loyal to his conviction," Che says to his five children, in a farewell letter. The idealist, no doubt present in him until his last breath, was unaware that the utopia of a universal socialist homeland implied in fact a superhuman conception. Sooner or later condemned to plunge into the infra-human conditions of life in a country like the oppressed and famished Cuba of today, which launches day after day into the sea and its sharks the rafts of the fugitives. Gambini's highly recommended biography preserves the hope that the brother country, through a process of gradual reforms, will regain its essential freedoms, without sacrificing any of the achievements achieved in the field of education, scientific research and social legislation.
Produktdetails
Autorenporträt
Hugo Gambini (1934-2019) was born in Buenos Aires in 1934. He has gone through all the veins of journalism, from the daily chronicle and the weekly note to the great report and opinion column. He was a reporter, chronicler and editor of newspapers, news agencies, newspapers, magazines, radio stations and television channels. In graphic journalism he went through La Vanguardia, El Avisador Mercantil, Crítica, Noticias Gráficas, El Economista, Diario Popular, Chronicle, See and Read, Leoplán, Panorama, Siete Días, Primera Plana and La Opinion. Since 1973 he is president of Editorial Redacción SA. He published El Che Guevara, which was a best-seller in 1968 and banned in 1969; reissued with the same success in 1973 and again banned in 1975; reissued in 1996 and this time chosen by booksellers from all over the country as the best biography of the year, to award him the Planeta Prize in that genre. In 1999 his History of Peronism appeared. The total power (1943-1951) and in June 2001 the second volume, entitled History of Peronism. The obsequence (1952-1955). He also published October 17, 1945 (1969); The First Presidency of Perón (1971); Peronism and the Church (1971). He directed the documentary Chronicle of the Falklands, in three volumes (1982/83). He has collaborated with notes signed in the newspapers La Nación and Clarín. In 1983 he was appointed by President Raúl Alfonsín to head Telam, the Argentine news agency. He was distinguished with the Order of the Bull Lisandro de la Torre (1972); the Mariano R. Castex Journalism Award (1977) and the Esquiú Silver Cross (1985). On radio and television it was banned by the military regimes and could only work in those media under democratic governments. He was a political columnist on El Mundo, Continental and Splendid radio stations. On television, he worked on all channels, until successfully conducting his own program Interpellation and becoming one of the most outspoken journalists in the media. Subsequently, he created and directed two television series: The Good and the Bad, of current political interviews, and the program Apenas Ayer, evocative of great historical themes. He acted aseditor-in-chief of the bi-monthly magazine Redacción Económica y de Redacción Automotriz, as well as host of the journalistic program Calentito el café, which is broadcast by Radio de la Ciudad (AM 1110), on Saturdays and Sundays at 8 a.m. He was also a columnist for the morning program Breakfast, which is broadcast daily throughout the country on Channel 7 of Buenos Aires.
Kundenbewertungen
Schreiben Sie eine Kundenbewertung zu diesem Produkt und gewinnen Sie mit etwas Glück einen 15,- EUR bücher.de–Gutschein!
Bewertung schreiben Bewertung schreiben