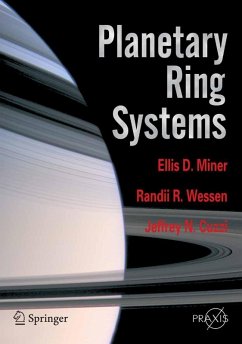 Miner and Wessen have teamed together again, along with noted planetary ring scientist, Dr Jeffrey Cuzzi, to produce the most comprehensive and up-to date book on the topic of planetary rings systems yet written. The book is written in a style and at a language level easily accessible to the interested non-expert. The authors cover the scientific significance of ring studies, the history of their discovery and characterization, the observations of Pioneer 10 at Jupiter, Pioneer 11 and Voyager 1 at Jupiter and Saturn, Voyager 2 at all four giant planets of the solar system, and Galileo at…mehr

Produktdetails
Autorenporträt
Of all the planets, Saturn is the most instantly recognisable to everyone because of its beautiful system of rings, visible in even a small telescope, discovered by Galileo in 1610, but not recognised for what they are until Christiaan Huygens' observations in 1655. Until 1977, Saturn's rings were considered unique, but we now know that all four gas giants, Jupiter, Saturn, Uranus and Neptune are surrounded by ring systems. However, it is true that the rings of Saturn remain in a class of their own.

James Clerk Maxwell's fascination with the rings of Saturn was made clear in his 1857 Adams Prize essay. After quoting parts of Maxwell's essay in their recent Scientific American article on rings ["Bejewelled Worlds", special edition entitled New Light on the Solar System, V. 13, No. 3, pp. 74-83, 2003], Burns, Hamilton and Showalter stated, "A century and a half later Saturn's rings remain a symbol of all that is exotic and wondrous about the universe".

Ellis Miner and Randii Wessen co-authored the successful Springer-Praxis book, Neptune: the planet, rings and satellites, published in December 2001 which has sold 1076 copies worldwide to date.

"This book is not just for astronomy students; many people will enjoy it ... . The book covers all of the giant gas planets, since they all have complex ring systems, and each has different attributes and features. The authors present the recent research findings on these systems, and they point out the numerous questions that still need to be answered. Summing Up: Highly recommended. General readers; lower-division undergraduates through faculty." (J. R. Kraus, CHOICE, Vol. 44 (10), June, 2007)
Kundenbewertungen
Schreiben Sie eine Kundenbewertung zu diesem Produkt und gewinnen Sie mit etwas Glück einen 15,- EUR bücher.de–Gutschein!
Bewertung schreiben Bewertung schreiben
Mehr zum Thema