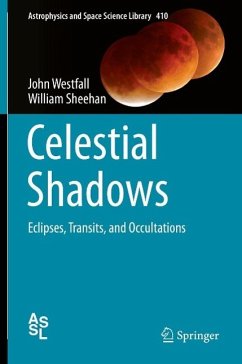 Much of what is known about the universe came from the study of celestial shadows. This book looks in detail at the way eclipses and other celestial shadows have given us amazing insights into the nature of the objects in our solar system and how they are even helping us discover and analyze planets that orbit stars other than our Sun. A variety of eclipses, transits, and occultations of the mooons of Jupiter and Saturn, Pluto and its satellite Charon, asteroids and stars have helped astronomers to work out their dimensions, structures, and shapes - even the existence of atmospheres and…mehr

Andere Kunden interessierten sich auch für
Produktbeschreibung
Much of what is known about the universe came from the study of celestial shadows. This book looks in detail at the way eclipses and other celestial shadows have given us amazing insights into the nature of the objects in our solar system and how they are even helping us discover and analyze planets that orbit stars other than our Sun. A variety of eclipses, transits, and occultations of the mooons of Jupiter and Saturn, Pluto and its satellite Charon, asteroids and stars have helped astronomers to work out their dimensions, structures, and shapes - even the existence of atmospheres and structures of exoplanets.

Long before Columbus set out to reach the Far East by sailing West, the curved shadow of the Earth on the Moon during a lunar eclipse revealed that we inhabit a round world, a globe. More recently, comparisons of the sunlit and Earthlit parts of the Moon have been used to determine changes in the Earth's brightness as a way of monitoring possible effects in cloud coverage which may be related to global warming. Shadows were used by the Greek mathematician Eratosthenes to work out the first estimate of the circumference of the Earth, by Galileo to measure the heights of the lunar mountains and by eighteenth century astronomers to determine the scale of the Solar System itself.

Some of the rarest and most wonderful shadows of all are those cast onto Earth by the lovely "Evening Star" Venus as it goes between the Earth and the Sun. These majestic transits

of Venus occur at most two in a century; after the 2012 transit, there is not a chance to observe this phenomenon until 2117, while the more common sweep of a total solar eclipse creates one of the most dramatic and awe-inspiring events of nature. Though it may have once been a source of consternation or dread, solar eclipses now lead thousands of amateur astronomers and "eclipse-chasers" to travel the globe in order to experience the dramatic view under "totality." These phenomena are among the most spectacular available to observers and are given their full due in Westfall and Sheehan's comprehensive study.

Produktdetails
Autorenporträt
William Sheehan has written many books on astronomy, including: Planets and Perception (1988), The Immortal Fire Within: the life and work of Edward Emerson Barnard (1995), The Planet Mars (1996), In Search of Planet Vulcan (with Richard Baum; 1997), Epic Moon (with Thomas Dobbins; 2001), and Transits of Venus (with John Westfall; 2004). He is a consultant to the International Astronomical Union's Working Group on Planetary System Nomenclature, a Special Research Fellow in history of astronomy at the Lowell Observatory, a contributing editor to Sky & Telescope magazine and an Honorary Fellow of the Royal Astronomical Society of Canada. He is also past fellow of the John Simon Guggenheim Memorial Foundation, and a recipient of the Gold Medal of the Oriental Astronomical Association. Asteroid no. 16037 has been named Sheehan in his honor by the I.A.U.

With Springer, he has published a translation of James Lequeux's biography of the French astronomer U.J.J. Leverrier: Le Verrier-Magnificent and Detestable Astronomer (with Bernard Sheehan; 2013); Galactic Encounters (with Chris Conselice; 2014); and a translation of Camille Flammarion's The Planet Mars (with the late Sir Patrick Moore; 2014).

Professionally, William Sheehan is a psychiatrist. He is married, with two sons. He divides his time between his psychiatric and astronomical activities and between homes in Willmar, Minnesota and Flagstaff, Arizona. Among Sheehan's most recent observations have been those of Venus's atmosphere made at Lowell Observatory, during the transit of Venus of June 5-6, 2012, as a member of the international Venus Twilight Experiment.

For most of his life a denizen of the Bay Area, Dr. Westfall majored in geography at the University of California, Berkeley (BA 1960) and the George Washington University (MA 1964, PhD 1969). Employed by the (then) Coast and Geodetic Survey from 1961-64, he joined the faculty of San Francisco State University's Department of Geography and Human Environmental Studies in 1968, teaching courses in quantitative and historical geography and remote sensing, retiring in 2005.

Dr. Westfall's interest in astronomy dates back to the late 1940s, when he joined the Eastbay Astronomical Society, becoming a member of the Association of Lunar and Planetary Observers (ALPO) in 1953. He currently serves on the ALPO board of directors and is the coordinator of its Mercury/Venus Transit Section and an assistant coordinator in its Jupiter Section (Galilean satellite events). He has authored the book Atlas of the Lunar Terminator (Cambridge) and coauthored Transits of Venus (Prometheus) with William Sheehan. He has chased 12 total solar eclipses, three annular eclipses and three planetary transits (plus two from home). Dr. Westfall currently observes lunar eclipses, asteroid occultations of stars, and Jupiter satellite eclipses from his backyard in the relatively clear skies of Antioch, his favorite telescopes being a C14 and a C5.

Inhaltsangabe
Preface.- Part I. The Diversity of Eclipse Events.- Eclipse Phenomena.- The Waltz of the Planets.- The Performers.- Part II. A Transit Chronicle.- The Beginnings.- Scaling the Heavens.- A Century of Progress and Disappointment - and Completion.- Our Own Venus Transit - The June Flowers of 2004.- Part III. 2012 - Our Last Chance for a Venus Transit.- The 2012 Event.- Observing the 2012 Transit.- Mercury also Transits the Sun.- Transits Galore.- The Splendor of a Solar Eclipse.- The Beauty of a Lunar Eclipse.- Planetary Satellites.- Occultations - When Blocking the View is Helpful.- Appendices.- References.- Index.
Rezensionen
Selected by Choice magazine as an "Outstanding Academic Title" for 2015 "In Celestial Shadows, westfall ... summarize all the ways in which observational astronomers and planetary scientists use eclipses, transits, and occultations to study distant objects. ... This 22-chapter book collects in one place such a tremendous amount of information that it will be very useful, in particular, to those who wish to learn about how these events have previously allowed and continue to allow scientists to study solar system objects in unique ways. ... Summing Up: Highly recommended. All levels/libraries." (C. Palma, Choice, Vol. 52 (10), June, 2015) "The authors explain the astronomy, how to make observations, flag up future events, and link them to a rich history in which such observations contributed to significant developments in astronomy. ... this work is as good a place as any for amateur astronomers to begin engagement with a history that takes them beyond the usual accounts of heroes and moments of discovery and makes a useful resource for historians and educators." (Rebekah Higgitt, Journal for the History of Astronomy, Vol. 47 (4), November, 2016)
Kundenbewertungen
Schreiben Sie eine Kundenbewertung zu diesem Produkt und gewinnen Sie mit etwas Glück einen 15,- EUR bücher.de–Gutschein!
Bewertung schreiben Bewertung schreiben
Mehr zum Thema