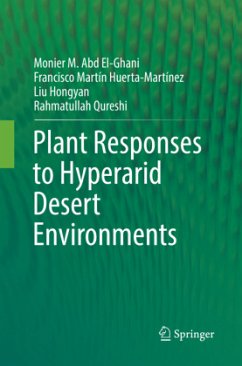 Covering a wide range of plant conditions and adaptations, this book analyzes what happens when plants must endure very high temperatures and aridity. Plants have adapted by evolving their physical structure to store and conserve water. Examples are the absence of leaves which reduces transpiration and the growth of extremely long roots, allowing them to acquire moisture at, or near the water table. Plants in hyperarid habitats have also made behavioral adaptations in order to survive by synchronizing with the seasons of greatest moisture and/or coolest temperatures. For example, desert perennials remain dormant during dry periods of the year, then spring to life when water becomes available.

The book includes many color illustrations, and has extensive and up-to-date references for further reading.
Produktdetails
Autorenporträt
Monier Abd El-Ghani was born on September 9, 1955 in Cairo, Egypt. In 1976, he graduated in Botany from the Faculty of Science, Cairo University (Egypt) where he received his M.Sc. and Ph.D. (Taxonomy and Flora) in 1981 and 1985, respectively. Studies of his M.Sc. and Ph.D. explored the vegetation structure and the biodiversity of the alien plant species in the agro-ecosystems of the Oases of the Western Desert of Egypt and the Faiyum region of the Nile land. His research interest in biodiversity in the arid regions of Egypt and Saudi Arabia resulted in publications of 6 books, and 72 publications in peer-reviewed (55) and national and local (13) journals. For two successive years (1997 & 1998), he obtained a research fellowship granted from the Alexander von Humboldt Foundation in Germany. In 2000, he was awarded the Encouragement State Prize in biological sciences from the Egyptian Academy for Scientific Research and Technology. In 2003, he was awarded Cairo University Encouragement Prize in biological sciences (applied and theoretical). In April 2015, he was awarded his D.Sc. from the Faculty of Science, Cairo University in the field of Plant Taxonomy and Flora as the first to receive the degree in this field. In June 2015, he was awarded the State Prize for Excellence in Basic Sciences, and in 2015 he was awarded the prestigious Georg Forster Research Prize from the Alexander von Humbold Foundation in Germany. Francisco Martín Huerta-Martínez is a Biologist from the University of Guadalajara in Mexico. He obtained his M. Sc. (Botany) at Colegio de Postgraduados in Mexico State in 1995 and his PhD (Botany) at the same institution in 2003. He is a Professor at University of Guadalajara in the Biological and Environmental Division with 27 years in the Applied Ecology Department, where he teaches and does research in ecology. His research interests include Plant Ecology, Plant Biodiversity and Conservation, Biotic Interactions, Ethnobotany and Forest Ecology. He has published several national and international research papers. He was a member of National System of Researchers in Mexico from 2004 to 2010. He is a member of ESA (Ecological Society of America), where he has participated in several of their annual meetings. Hongyan Liu is a Professor of Vegetation Ecology and Quaternary Ecology at Peking University, China. He received his B.S. in Physical Geography and M.S. in Environmental Geoscience from Peking University, and his Ph. D. degree in Botany from Hannover University, Germany. He has investigated Inner Asian vegetation for over 20 years. His current research focuses on climate- and human-driven vegetation dynamics in the arid regions of Asia at different time scales by combining modern vegetation surveys, tree-ring analysis, pollen analysis and modelling. So far he has published about 80 papers in international journals. He is also Associate Dean of Research at the College of Urban and Environment Sciences of Peking University. Rahmatullah Qureshi obtained a M. Sc. (Botany) in 1996 from the Shah Abdul Latif University, Khairpur (Mir's), Sindh, Pakistan. He joined Shah Abdul Latif University, Khairpur (Mir's), Sindh, Pakistan, as a Research Associate in 1998 and received his PhD degree in from the same university in 2005. He qualified for the post of Seed Cerification Officer in the Federal Public Service Commission and joined the Department in 2002. He started his teaching career by joining the Department of Botany, Pir Mehr Ali Shah Arid Agriculture University, Rawalpindi, Pakistan as Assistant Professor in 2007. Based on his research and teaching achievements, he has been promoted first Associate Professor (Regular) in 2010 and then on TTS in the Department of Botany. His research interests include ethnobotany, plant biodiversity and conservation, phytosociology and weed ecology. He has published over 150 research papers in prestigious peer-reviewed journals, 2 international books, and 2 invited international book chapters. He won five research productivity awards by the Pakistan Council for Science & Technology (PCST) based on his publications, impact factor, number citations, etc. He has presented 45 abstracts at various national and international symposia/conferences/workshops. As of 2011, he is a member of the executive council of the Pakistan Botanical Society as Vice President (Punjab).
Kundenbewertungen
Schreiben Sie eine Kundenbewertung zu diesem Produkt und gewinnen Sie mit etwas Glück einen 15,- EUR bücher.de–Gutschein!
Bewertung schreiben Bewertung schreiben
Mehr zum Thema