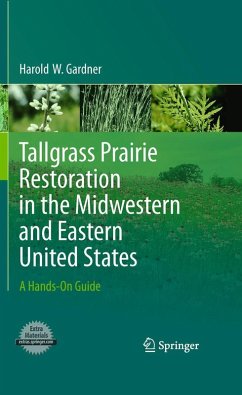 This work advocates the restoration of the North American tallgrass prairie, which is rapidly disappearing. Historical descriptions of prairie aesthetics are outlined. As we are experiencing a worldwide mixing of plant species, prairie restoration is particularly important. Plants alien to North America do not readily support insect populations, including all animal species higher on the food chain. Prairie restoration methods are described for amateurs, academics, and land managers. Some of the techniques described are growing crops for seed production, times of seed gathering for specific…mehr

Andere Kunden interessierten sich auch für
Produktbeschreibung
This work advocates the restoration of the North American tallgrass prairie, which is rapidly disappearing. Historical descriptions of prairie aesthetics are outlined. As we are experiencing a worldwide mixing of plant species, prairie restoration is particularly important. Plants alien to North America do not readily support insect populations, including all animal species higher on the food chain. Prairie restoration methods are described for amateurs, academics, and land managers. Some of the techniques described are growing crops for seed production, times of seed gathering for specific species, facile seed processing for amateurs, land preparation, segregation of seed into its preference for habitat, and required seed treatment for germination. Over 200 species are described that comprise the predominant species found in tallgrass prairie nature preserves, as well as degraded prairies. Some additional plants of especial interest are also described. The appendix tabulates all likely species found on prairies regardless of their scarcity. Safe fire management of prairies is described in detail. Finally, methods of controlling aggressive alien weeds by herbicides are detailed.

An introduction outlining past work by the author and volunteers, and gives compelling arguments for using methods outlined in the book to restore prairie.

This section describes the aesthetic beauty of prairies and historical accounts of their former grandeur.

This section discusses the origins of prairie millennia before present, and the role of fire.

Description of several different plant communities dependent on moisture, soil-type, degree of disturbance, and amount of available light; that is, prairies are rarely identical. Several eco-typical prairies are illustrated from wet-mesic to "dry" sands.

This section outlines the varieties of wildlife, including mammals, amphibians, reptiles, birds, and insects, the latter being critical to sustain higher forms, except herbivores.

193 plants are described and fully illustrated with high quality photos. In addition, 34 other species are described without photos, but often accompanied by computer scans of fresh herbarium samples and/or seed-head/seeds on CD. The plants described are typical of those found on prairies or open areas in the Midwest and East plus several plants of special interest. Descriptions are given of their ranges by states and Canadian provinces. Also outlined are methods of their restoration, such as their growth preferences, tolerance for disturbance, and methods of seed collection, and critical conditions for seed germination. Most species can be easily grown in the mid-latitudes, including the south and west. Most often, the typical species is found in its northern limit from Maine to Ontario west to Minnesota, South Dakota, and Nebraska ranging south and east from this northern limit to all states, often excluding Louisiana, Florida, and South Carolina. Species gradually change as conditions become drier, warmer, or cooler, but most species persist over a large area of a region compatible to tallgrass and associated wildflowers. This section of the book represents the major portion of the work (131 pages of the 215 pages total).


This section gives suggestions on methods of using native plants to enhance the appearance and increase native wildlife in suburban settings. Tips are given to avoid the appearance of "a weed patch."

It is critical to know the soil type and average moisture availability in planning the type of species to restore. Tolerance to disturbance is discussed with reference to the Coefficient of Conservatism introduced by Taft et al.

Seed production is an essential prerequisite of every restoration. Starter seeds can be collected from the wild or purchased from nurseries.

If the seeds of certain species are not readily available, seeds can be purchased from nurseries, of which several are recommended.

Since wild seeds shatter with a seeming degree of unpredictability, methods of seed collection are outlined, including the crucial optimal dates of collection.

Many factors are involved in restoration of a plot of land. It is essential to initially eliminate aggressive alien perennials with glyphosate herbicide. Annual weeds can be a lesser problem, and management methods are suggested. A variety of methods are discussed for treatment of soil, and amount of seed to use. Ecological equilibrium after restoration is an important factor permitting the option of sowing seed of conservative species.


Specific problems with animal and insect predation are described. Rationale is given for permitting nature to take its course, as wildlife will definitely increase after restoration. However, there is imbalance caused by alien species, such as Japanese beetles. Often alien insects are not sufficiently utilized by native insectivores.

This section describes potential for prairies in an era of diminishing fossil fuel, particularly because prairie is a perennial eco-system. Because many prairie plants are "C-4" CO2 fixers, they produce copious amounts of dry matter. And, prairie legumes supply nitrogen to the soil. Some farmers and ranchers have discovered that grazing native bison provides a way of producing premium low-fat meat with a minimum of energy input. Other perennial food crops for humans will require much more development.

This section predicts possible effects on prairie, such as warming and CO2 levels.

CO2 levels could have a profound effect on species predominance depending on their C-3 or C-4 method of CO2 fixation.


Formerly prairie was maintained by regular fire caused by accident or set by man. Recent lack of fire has caused prairie to significantly degrade.

Early spring (March) is best depending on conditions of wind, humidity, and time of day. Fall burning is also possible, but often not optimal.

Recommended fire fighting tools are described and shown in a figure.

Many strategies are required, but the foremost requirement is starting the fire upwind with the security of a firebreak and a team of fire fighters.

This section gives an insight into some of the most common errors encountered in prairie fires.


Fall mowing is one of the best alternatives to management by fire, but it is impractical for large areas.

In addition to color photos of 193 plants, there are 15 color figures illustrating important considerations.

The appendix contains 31 pages of detailed data for over 1,000 species, including those described in Section 6.