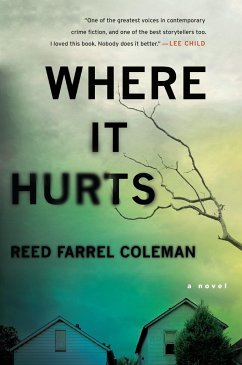 Nominated for the 2017 Edgar Award for Best Novel
From the critically acclaimed and award-winning author comes a gritty, atmospheric new series about the other side of Long Island, far from the wealth of the Hamptons, where real people live and die.
Gus Murphy thought he had the world all figured out. A retired Suffolk County cop, Gus had everything a man could want: a great marriage, two kids, a nice house, and the rest of his life ahead of him. But in the course of a single deadly moment, his family is blown apart, and he is transformed from a man who believes he understands everything…mehr

From the critically acclaimed and award-winning author comes a gritty, atmospheric new series about the other side of Long Island, far from the wealth of the Hamptons, where real people live and die.

Gus Murphy thought he had the world all figured out. A retired Suffolk County cop, Gus had everything a man could want: a great marriage, two kids, a nice house, and the rest of his life ahead of him. But in the course of a single deadly moment, his family is blown apart, and he is transformed from a man who believes he understands everything into a man who understands nothing.
Now divorced and working as a courtesy van driver for a run-down hotel, Gus has settled into a mindless, soulless routine. But his comfortable waking trance comes to an end when ex-con Tommy Delcamino asks him for help. Four months earlier, the battered body of Tommy s son TJ was discovered in a wooded lot, yet the Suffolk County PD doesn t seem interested in pursuing the killers. In desperation, Tommy seeks out the only cop he ever trusted Gus Murphy.
Gus reluctantly agrees to see what he can uncover, and as he begins to investigate, he finds that Tommy was telling the truth. Everyone involved with the late TJ Delcamino from his best friend, to a gang enforcer, to a Mafia capo, and even the police has something to hide, and all are willing to go to extreme lengths to keep it hidden. It s a dangerous favor Gus has taken on as he claws his way back to take a place among the living, while searching through the sewers for a killer.

Produktdetails
Autorenporträt
Reed Farrel Coleman, called a hard-boiled poet by NPR s Maureen Corrigan and the noir poet laureate in The Huffington Post, is the Edgar-nominated author of twenty-three novels and three novellas, including the critically acclaimed Moe Prager series. A three-time winner of the Shamus Award, he has also won the Anthony, Macavity, Barry, and Audie Awards. Coleman lives with his family on Long Island.
Rezensionen
Part of NPR s Guide to 2016 Great Reads

Coleman has long been one of the best crime novelists in the business Where It Hurts is a superb detective novel in the Raymond Chandler tradition, featuring fine prose, a suspenseful yarn and a compelling main character who will leave readers hungering for the next installment. Associated Press

Coleman is an excellent storyteller, and his colorful, punchy writing displays a delicious noir cynicism .But what local crime fiction fans will find most absorbing about Where It Hurts is its clear-eyed knowing portrait of the people and places that comprise Long Island s hidden underworld. Newsday

Coleman writes with a rough beauty .Coleman is a genius .Fascinating reading and will richly entertain you. Jackie K Cooper, Book Critic, The Huffington Post

Coleman s poetic pulp fiction in Where It Hurts translates seamlessly to the here and now .It s proof that the hard-boiled detective genre is timeless. His version of Sam Spade merely carries a cellphone and has a therapist. The Dallas Morning News

Gus, who is absolutely one of genre veteran Coleman s best-drawn characters, brings the hard-boiled investigator s requisite battle scars to the table without the self-destructive bent we ve been trained to expect. Instead, he meets his tragedy and its consequences with a considered straightforwardness, and his desire for justice reawakens in time with the investigation s quickening tempo, hopefully signaling the start of a series. Booklist (starred)

It s impossible to pull Gus, whose depressive streak is matched only by his bulldog determination, off the case. Tracking down three lowlifes he quickly finds himself in a whirlpool of sex, drugs, murder, and warnings to walk away. Kirkus

Reed Farrel Coleman introduces a great new character, Gus Murphy, a street savvy ex-cop who operates beneath the glitter of the Gold Coast and the glitz of the Hamptons in a Long Island that few outsiders ever see. Where It Hurts is a gut punch of a novel, a murder mystery layered with grief, greed, and grit. Coleman is as good as Chandler, Hammett or Ed McBain. Nelson DeMille

"One of the greatest voices in contemporary crime fiction, and one of the best storytellers too. I loved this book. Nobody does it better." Lee Child

Gus Murphy is the new name in crime fiction. He is my kind of guy and Where It Hurts, Reed Farrel Coleman s spectacularly absorbing new novel, is my kind of story. You go into a story like this expecting/hoping for a solid character to ride with, a high-octane story in which you don t see the turns coming in the road ahead, and a truthful observation on life from a different angle. As usual, Coleman delivers. I can t wait for Murphy and Coleman to show up again. Michael Connelly

The author of the Moe Prager series has created another engaging sleuth in the down-but-not-out Gus The ancillary characters, both good and bad, are also a fascinating mix. Moe Prager fans will hail this new series, as will lovers of solid mysteries, especially those set on Long Island. Library Journal (starred)

Modern noir at its absolute best! Reading Where It Hurts is to bask in the joy of the heyday of private eye fiction Chandler, Hammett, Cain and the whole crew. Everything s a delight, from the speedy and clever plot, to the firecracker snap of the dialog, to the heart-wrenching portrayal of the characters good and bad. And Gus Murphy, what a protagonist! Coleman s truly delivered, and then some. Jeffery Deaver

Where It Hurts is a thrilling start to a new series by Reed Farrel Coleman - who writes some of the best crime fiction around. Tough prose, taut plotting, and a great new protagonist named Gus Murphy. Coleman's got a winner here." Linda Fairstein

Reed Farrel Coleman s Where It Hurts tells a riveting story about a Long Island that has nothing to do with the romantic vision of F. Scott Fitzgerald in this action packed tale of an amoral world. Coleman is a born storyteller who writes with great authority and gives as much bang for the buck as the best books in the genre. Pat Conroy, author of South of Broad and Beach Music

Where It Hurts ushers us into a vivid and rueful new world with a striking and haunted hero for whom we fall hard. With his signature hard-bitten lyricism but with an urgency and darkness all its own, Reed Farrel Coleman has given us a riveting new series we ll want to live with for a very, very long time. Megan Abbot, New York Times bestselling author of Dare Me and The Fever

Where It Hurts is taut, smart, and engaging with a terrific sense of place. Readers will never go wrong with Gus Murphy or his creator Reed Farrel Coleman. C.J. Box, New York Times bestselling author of Endangered