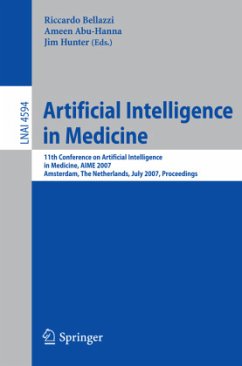 The European Society for Arti?cial Intelligence in Medicine (AIME) was - tablished in 1986 following a very successful workshop held in Pavia, Italy, the year before. The principal aims of AIME are to foster fundamental and applied research in the application of arti?cial intelligence (AI) techniques to medical care and medical research, and to provide a forum at biennial conferences for discussing any progress made. For this reason the main activity of the Society wastheorganizationofaseriesofbiennialconferences,heldinMarseilles,France (1987), London, UK (1989), Maastricht, The Netherlands…mehr