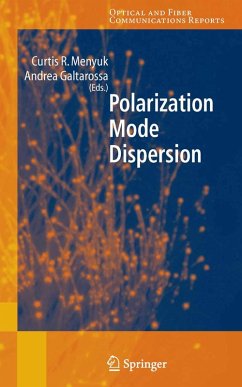 Andere Kunden interessierten sich auch für
Produktbeschreibung
the model for low-PMD ?bers; Nicolas Gisin covered the increasingly important topic of the interaction of PMD with polarization dependent loss. Other topics that were included in the school were: "PMD models," which was covered byAntonio Mecozzi and Mark Shtaif; "Interaction of PMD with nonlinearity and chromatic dispersion," which was covered by Curtis Menyuk; "PMD measurement techniques," which was covered by Paul Williams and by Marco Schiano in two separate lectures; "Spatially resolved measurement of ?ber polarization properties," which was covered by Luca PalmieriandAndreaGaltarossa;"PMDimpactonopticalsystems,"whichwascovered by Magnus Karlsson and by Francesco Matera in two separate lectures; "Polarization effects in recirculating loops," which was covered by Brian Marks, Gary Carter, and Yu Sun; "PMD Emulation," which was covered byAlan Willner and Michelle Hauer; and, ?nally, "Applications of importance sampling to PMD," which was covered by Gino Biondini, Bill Kath, and Sarah Fogal. Dipak Chowdhury worked withArtis and VPI-two producers at that time of commercial software for modeling optical ?ber communications systems-to present a lecture that covered numerical modeling of PMD. Additionally, we had lectures on special topics by Hermann Haus, Jim Gordon, Herwig Kogelnik, and Carlo Someda. Finally, we had a poster session, which gave the lecturers the opportunity to learn something from our participants. The feedback that we received from the participants and the lecturers was ov- whelmingly positive. This success was due to the great time and energy that all the instructors put into their lectures.