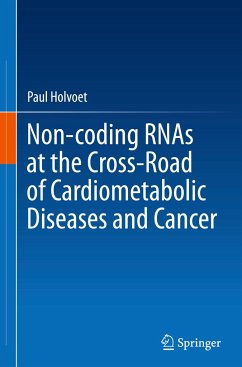 This book gives insight into the functional role of non-coding RNAs in central pathways contributing to the development of obesity, type 2 diabetes, non-alcoholic fatty liver disease, atherosclerosis, myocardial infarction, cardiomyopathy, and heart failure. It also sheds light on the relationship of this cluster with cancer. Tumor cells, in contrast to cells in cardiometabolic tissues, can regulate this cluster of non-coding RNAs to escape from oxidative stress and anti-tumor immunity and maintain insulin sensitivity, facilitating cancer progression. The book presents a cluster of non-coding…mehr

Andere Kunden interessierten sich auch für
Produktbeschreibung
This book gives insight into the functional role of non-coding RNAs in central pathways contributing to the development of obesity, type 2 diabetes, non-alcoholic fatty liver disease, atherosclerosis, myocardial infarction, cardiomyopathy, and heart failure. It also sheds light on the relationship of this cluster with cancer. Tumor cells, in contrast to cells in cardiometabolic tissues, can regulate this cluster of non-coding RNAs to escape from oxidative stress and anti-tumor immunity and maintain insulin sensitivity, facilitating cancer progression. The book presents a cluster of non-coding RNAs that may be prospectively analyzed in extensive cohort studies to determine their value in risk-predicting machine learning algorithms. In addition, it emphasizes the role of microvesicles in communication between tumor-adjacent tissue, inflammatory cells, and tumor cells, with a special focus on the role of miR-155.

The book intends to promote interdisciplinary research. Due to the comprehensive background information provided in each chapter, it is suitable for researchers in academia and industry and for graduate students in biology, bioengineering, and medicine.

Produktdetails
Autorenporträt
About the Author: Prof. Paul Holvoet, an emeritus professor in Biomedicine at KU Leuven, Belgium, who co-authored more than 250 papers receiving more than 11,000 citations. He established the relation between oxidative stress and obesity, insulin resistance and metabolic syndrome, and the relationship between metabolic syndrome and acute cardiovascular disease. He contributed to the elucidation of the role of non-coding RNAs in the regulation of immune response, oxidative stress, insulin signaling, and inflammation in the pathogenesis of obesity, type 2 diabetes, non-alcoholic fatty liver disease, atherosclerosis, and cardiovascular diseases. He now uses his mechanistic knowledge in all these fields to compare non-coding RNAs' role in cancer progression. He obtained European and US patents on markers of oxidative stress, which predict cardiometabolic diseases (2007). He recently received a European and US license about markers for identifying a patient at risk for experiencing one or more cardiovascular events and revising treatment (2018-2020). He obtained the honorary titles of Fellow of the American Heart Association and the European Society of Cardiology. He was a panel member of the European Research Council (2007-2013) and reviewed papers and research proposals submitted to high-impact journals and funding organizations in Europe and NIH-US. He was an associate editor of the journal Arteriosclerosis, Thrombosis and Vascular Biology for over twenty years, and first an associated editor, and between 2013 and 2017, a deputy editor of Cardiovascular Research. Together with Tine Holvoet, sociologist, he is a co-founder of Teamtank, promoting interdisciplinary collaboration. As an example of this, Paul Holvoet collaborated with the illustrator Pieterjan Ginckels in editing this book. About the Illustrator: Pieterjan Ginckels is an artist and architect. "Our lives are hyper-real, and we feel the urge to continuously pimp, remix, recollect our own identity," says Pieterjan Ginckels. "As such, I see myself as an embedded outsider, playing with ambivalences in speed and authenticity." The Belgian artist's work concerns itself with the acceleration of modern life, and he demonstrates this through exhibitions and experiences that interweave spatial, artistic and design practice. Performative in nature, Ginckels received attention for his installation PISTE, a velodrome within a museum, and SPAM Office, a surreal office environment dedicated to finding order within the detritus of electronic communication. (ICON Magazine, 'Future 50,' 2013) His work is part of the permanent collections of Mu.ZEE (Ostend), Museum Voorlinden (The Hague) and ING Belgium, and has been shown at ANDOR (London), BOZAR (Brussels), The Graham Foundation (Chicago), Onomatopee (Eindhoven), Beaufort Triennale, Bucharest Biennale, and NAK (Aachen), among others. In 2011 Ginckels received the Center for Fine Arts Award at the Young Belgian Painters Award 2011, BOZAR Center for Fine Arts, Brussels. He holds a post-doc position and teaches at the KU Leuven Faculty of Architecture in Brussels and Ghent. He is the founding editor of MISANTHROPOZINE, an architecture journal that experiments with visual culture. The journal responds to the contemporary architectural scene and the personae who define it - architects, artists, thinkers, policy-makers, and residents.
Inhaltsangabe
INTRODUCTION

The move towards cellular risk markers

CHAPTER I: BIOGENESIS AND MODES OF ACTION OF MIRS AND CIRCULAR AND LONG NON-CODING RNAS

2.3 Mechanisms in brown adipogenesis and thermogenesis

2.3.1 Role of non-coding RNA in brown adipogenesis and thermogenesis

2.4.1 Role of non-coding RNAs in browning of white adipose tissue

3.2 Mechanisms in insulin signaling in the pancreas

3.3 Inflammation in the pancreas, insulin resistance, and type 2 diabetes

3.3.1 Non-coding RNA related to inflammation in the pancreas, with insulin resistance and type 2 diabetes

5.1 Mechanisms in cardiomyopathy and heart failure

5.3 Metabolic syndrome: the link between metabolic and cardiovascular diseases.

6.1.4 Induction of glycolysis and repression of OXPHOS

6.3 Comparison of the role of non-coding RNAs in cardiometabolic diseases and cancer 224

6.4 Differences in miR-profiles in cardiometabolic tissues and tumors may be due to the typical action of lncRNAs and circ-RNAs in tumors

CHAPTER VII: COMMUNICATION BETWEEN TUMOR-ADJACENT TISSUES AND TUMORS WITH EMPHASIS ON ROLE OF INFLAMMATORY CELLS

7.3 MiR-155 as a link between M1 macrophage-mediated inflammation in tumor-adjacent tissue and tumor growth and metastasis

Technical developments underlying the use of non-coding RNAs as biomarker

The need for measuring fluctuation of non-coding RNAs