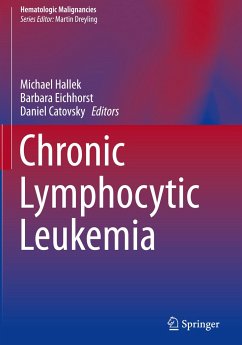 This book summarizes current knowledge on chronic lymphocytic leukemia (CLL), taking into account the most recent research. All aspects are considered, including pathophysiology, clinical presentation, diagnosis, prognosis, treatment, follow-up, and complications and their management. Readers will find important information on the various prognostic markers as well as practical guidance on the use of different diagnostic procedures. A key focus of the book is the changing treatment paradigm in CLL as progress in understanding of pathogenesis and pathophysiology leads to the identification of…mehr

Andere Kunden interessierten sich auch für
Produktbeschreibung
This book summarizes current knowledge on chronic lymphocytic leukemia (CLL), taking into account the most recent research. All aspects are considered, including pathophysiology, clinical presentation, diagnosis, prognosis, treatment, follow-up, and complications and their management. Readers will find important information on the various prognostic markers as well as practical guidance on the use of different diagnostic procedures. A key focus of the book is the changing treatment paradigm in CLL as progress in understanding of pathogenesis and pathophysiology leads to the identification of new potential therapeutic targets. General treatment concepts are clearly described, and it is explained how choice of treatment for CLL depends on stage, age, and performance status as well as specific genetic aberrations. In addition, frontline therapeutic strategies for disease relapse, including allogeneic stem cell transplantation, are reported. Looking beyond CLL, the diagnosis and therapy of T-cell prolymphocytic leukemia and T-cell large granular lymphocyte leukemia, two rare CLL-related entities, are addressed.
Produktdetails
Autorenporträt
Michael Hallek, MD, received his medical degree from the University of Munich, Germany, in 1985. From 1985 to 1990, he trained in pharmacology and internal medicine at that university and at the Technical University of Munich. He then spent two years as a research associate at the Dana Farber Cancer Institute at Harvard Medical School, Boston, USA, before returning to the University of Munich, where he continued his training in internal medicine and in hematology and oncology. From 1994 to 2005, he was head of the Gene Therapy Program at the Gene Center of the University of Munich and at the National Center for Research on Environment and Health (GSF), Munich. In 1994, he founded the German CLL Study Group (DCLLSG) and has remained its chairman until today. Since 2003, Dr. Hallek has been Professor of Medicine, Director, and Chair of the Department I of Internal Medicine at the University of Cologne. Since 2007, he has also been chairman of the Center for Integrated Oncology (CIO), the joint comprehensive cancer center of the Universities of Cologne and Bonn. In 2011, he became a member of the National Academy of Sciences (Leopoldina). Besides numerous awards, he has received the honour of the Ham-Wasserman Lecture during the American Society of Hematology in 2018. Since 2018, he has been chairman of the scientific committee of the European School of Haematology, Paris. Barbara Eichhorst, MD, PhD, graduated from the Medical School of the University of Munich in 1997. She did her doctoral thesis in the field of hematology, evaluating signaling transduction pathways in Hodgkin cells. Dr. Eichhorst completed an internship at the Department III for Internal Medicine at Klinikum Großhadern of the University of Munich before becoming a consultant for internal medicine. She has worked at the University Hospital of Cologne since February 2005 and was appointed a consultant in hematology and internal oncology there in April 2006. She became assistant professor at the University of Cologne in December 2012 and is a consultant in Department I for Internal Medicine at the University Hospital of Cologne. Shortly after the foundation of the German CLL Study Group (GCLLSG) she became a member of its leading group, acting as principal investigator in several phase II and III trials evaluating treatment optimization in CLL. Since 2005 she has been secretary of the GCLLSG. Dr. Eichhorst has published a number of papers on the topic of treatment of CLL within clinical trials, and she is a globally recognized specialist in the field of CLL. Daniel Catovsky, MD, DSc(Med), FRCPath, FMedSci, is Emeritus Professor and Fellow in the Division of Molecular Pathology at The Institute of Cancer Research, London, UK. Dr. Catovsky obtained his medical degree in Buenos Aires in 1961 and from 1967 worked under David Galton in the MRC Leukaemia Unit at the Hammersmith Hospital and Royal Postgraduate Medical School, where he was awarded a personal chair in hemato-oncology. In 1988 he became Head of Haematology at the Royal Marsden Hospital and The Institute of Cancer Research. A world authority on chronic adult leukemias, he has held visiting professorships in many countries, served on the editorial board of ten national and international journals, and published over 850 book chapters and papers in peer-reviewed journals. One of the key people who brought CLL, the most common adult leukemia, to the attention of the research community, he has been coordinator of the UK CLL Trials 1, 2, 3, 4, and 5. His work in hairy cell leukemia has helped to transform the prognosis for patients with this disease. He has served on a variety of review and advisory boards and has been President of the British Society of Haematology (1996-7) and of the European Research Initiative on CLL (ERIC) (2006-2009). He has received the BSH Medal for contributions to British hematology (2000) and the Binet-Rai medal for outstanding contributions to CLL research (2005).
Inhaltsangabe
Pathophysiolgoy.- Diagnostics.- Clinical Presentation.- Prognostic Markers.- Treatment.- Follow-up and Complications.- Related Entities.
Kundenbewertungen
Schreiben Sie eine Kundenbewertung zu diesem Produkt und gewinnen Sie mit etwas Glück einen 15,- EUR bücher.de–Gutschein!
Bewertung schreiben Bewertung schreiben
Mehr zum Thema
Mehr aus der Kategorie Fachbücher > Medizin & Pharmazie > Klinische Fächer > Chirurgie > Viszeralchirurgie