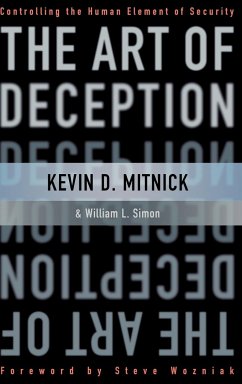 The world's most infamous hacker offers an insider's view of the low-tech threats to high-tech security Kevin Mitnick's exploits as a cyber-desperado and fugitive form one of the most exhaustive FBI manhunts in history and have spawned dozens of articles, books, films, and documentaries. Since his release from federal prison, in 1998, Mitnick has turned his life around and established himself as one of the most sought-after computer security experts worldwide. Now, in The Art of Deception, the world's most notorious hacker gives new meaning to the old adage, "It takes a thief to catch a…mehr

Forecast: Mitnick's notoriety and his well written, entertaining stories should generate positive word-of-mouth. With the double appeal of a true-crime memoir and a manual for computer security, this book will enjoy good sales." (Publishers Weekly, June 24, 2002)

"The world's most famous computer hacker and cybercult hero, once the subject of a massive FBI manhunt for computer fraud, has written a blueprint for system security based on his own experiences. Mitnick, who was released from federal prison in 1998 after serving a 22-month term, explains that unauthorized intrusion into computer networks is not limited to exploiting security holes in hardware and software. He focuses instead on a common hacker technique known as social engineering in which a cybercriminal deceives an individual into providing key information rather than trying to use technology to reveal it. Mitnick illustrates the tactics comprising this "art of deception" through actual case studies, showing that even state-of-the-art security software can't protect businesses from the dangers of human error. With Mitnick's recommended security policies, readers gain the information their organizations need to detect and ward off the threat of social engineering. Required reading for IT professionals, this book is highly recommended for public, academic, and corporate libraries. [This should not be confused with Ridley Pearson's new thriller, The Art of Deception." --Ed]--Joe Accardi, William Rainey Harper Coll. Lib., Palatine, IL (Library Journal, August 2002)

"He was the FBI's most-wanted hacker. But in his own eyes, Mitnick was simply a small-time con artist with an incredible memory, a knack for social engineering, and an enemy at The New York Times. That foe, John Markoff, made big bucks selling two books about Mitnick - without ever interviewing him. This is Mitnick's account, complete with advice for how to protect yourself from similar attacks. I believe his story." (WIRED Magazine, October 2002)

"Mitnick outlines dozens of social engineering scenarios in his book, dissecting the ways attackers can easily exploit what he describes as 'that natural human desire to help others and be a good team player.'" (Wired.com, October 3, 2002)