Anatomy of an Obsession 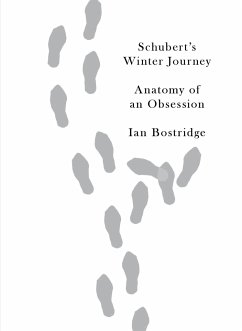 Anatomy of an Obsession

An exploration of the world s most famous and challenging song cycle, Schubert's Winter Journey ( Winterreise ), by a leading interpreter of the work, who teases out the themes literary, historical, psychological that weave through the twenty-four songs that make up this legendary masterpiece.
Completed in the last months of the young Schubert s life, Winterreise has come to be considered the single greatest piece of music in the history of Lieder. Deceptively laconic these twenty-four short poems set to music for voice and piano are performed uninterrupted in little more than an hour it…mehr

Andere Kunden interessierten sich auch für
Produktbeschreibung
An exploration of the world s most famous and challenging song cycle, Schubert's Winter Journey (Winterreise), by a leading interpreter of the work, who teases out the themes literary, historical, psychological that weave through the twenty-four songs that make up this legendary masterpiece.

Completed in the last months of the young Schubert s life, Winterreise has come to be considered the single greatest piece of music in the history of Lieder. Deceptively laconic these twenty-four short poems set to music for voice and piano are performed uninterrupted in little more than an hour it nonetheless has an emotional depth and power that no music of its kind has ever equaled. A young man, rejected by his beloved, leaves the house where he has been living and walks out into snow and darkness. As he wanders away from the village and into the empty countryside, he experiences a cascade of emotions loss, grief, anger, and acute loneliness, shot through with only fleeting moments of hope until the landscape he inhabits becomes one of alienation and despair. Originally intended to be sung to an intimate gathering, performances of Winterreise now pack the greatest concert halls around the world.

Drawing equally on his vast experience performing this work (he has sung it more than one hundred times), on his musical knowledge, and on his training as a scholar, Bostridge teases out the enigmas and subtle meanings of each of the twenty-four lyrics to explore for us the world Schubert inhabited, his biography and psychological makeup, the historical and political pressures within which he became one of the world s greatest composers, and the continuing resonances and affinities that our ears still detect today, making Schubert s wanderer our mirror.

Produktdetails
Autorenporträt
IAN BOSTRIDGE is universally recognized as one of the greatest Lieder interpreters of our era. In addition to his numerous award-winning recordings of opera and song, he was the original Caliban in Thomas Adès s The Tempest, and he played Gustav von Aschenbach in English National Opera s landmark 2007 production of Death in Venice. A D. Phil of Oxford University for his work on the significance of witchcraft in English public life from 1650 to 1750, he lives in London with his wife, the writer and critic Lucasta Miller, and their two children.
Rezensionen
International Praise for Schubert's Winter Journey

Enthralling. . . . With Schubert s Winter Journey: Anatomy of an Obsession, Ian Bostridge proves to be one of the most impressive writers among musical performers, as erudite and vivid as he is entertaining. . . . Ian Bostridge s book is brilliant and unique. After reading it, we may listen differently to this supreme work of art, one that, despite being tainted by death, makes life worth living. Alfred Brendel, The New York Review of Books

Exquisite. . . . The tenor and, it transpires, fine writer Ian Bostridge is a great guide to the mysterious winter-scape and supreme symbiosis of word and music, the marrying and tussling of piano and vocal lines, which Schubert took to hitherto unimaginable musical and emotional planes. Bostridge's engaging mélange of memoir, cultural history, close musical reading, glimpses of biography and wide-reaching examples of the ripple effect of Winterreise's influence on writers, composers, historians, and thinkers ever since including Beckett, Benjamin Britten, Djuna Barnes, Paul Auster, Thomas Mann, and Slavoj iek makes a strong case for Winterreise being as deserving of a place in our common experience as the poetry of Shakespeare and Dante, the paintings of Van Gogh and Pablo Picasso, the novels of the Brontë sisters or Marcel Proust. Rebecca K. Morrison, The Independent (UK)

Tantalizing. . . . Bostridge s language is often youthful and hip. . . . In this hyper-intensive book, the great surprise comes near the end, with his concise explanation of the inscrutable poem Die Nebensonnen. It s not to be spoiled here, but it s Bostridge s final triumph. . . It s easy to imagine stunned young acolytes carrying [Schubert s Winter Journey] around the way they used to carry around Goethe s Sorrows of Young Werther. William R. Braun, Opera News

"Ian Bostridge, one of Britain s foremost tenors, has performed Winterreise more than 100 times. He knows every last nuance of the work and has given it a great deal of thought. His beautifully produced book offers many new insights that will inform the enjoyment of both old admirers and newcomers to the music. . . . Mr Bostridge is a good storyteller and keeps the reader in constant suspense. . . . Mr Bostridge has an acute understanding of the historical context of the time and how it may have influenced Schubert s reading of the poems." The Economist

"Wouldn't it be great if we nonexpert folks could get experts to give us guided tours of great music in humane, rather than technical, terms? That is what we have in Schubert's Winter Journey by Ian Bostridge. He is a well-known tenor/writer, and Franz Schubert's Winterreise, or Winter Journey (composed 1827-1828) is among his favorite works. After you read this book, it might become one of yours, too." John Timpane, The Philadelphia Inquirer

"Much of Bostridge s exploration comes from a performer s perspective: cogent explanations of the niceties of musical notation and interpretation, close readings of the text. . . . But the book also approaches from myriad scholarly and historical angles, vectors Bostridge who trained as a historian chooses with judicious flair. . . . Bostridge s curiosity enriches the book and the music." Matthew Guerrieri, The Boston Globe

"Schubert s Winter Journey is an unusual and compelling book: Omnivorous and digressive, it captures the enduring mystery of this seminal work in the lieder tradition. Readers who love Winterreise will find the book a rare treat, and those who do not yet know the piece have here a fine companion as they listen. . . . Mr. Bostridge s mastery of the music and the text is evident throughout." Michael O Donnell, The Wall Street Journal

A magnificent study of one of the most influential and simultaneously mysterious musical works of the Romantic period. And there s no one better to crack it open than Bostridge, who knows its wormholes better than anyone. The Daily Beast

Bostridge brings the knowledge of an expert but none of their jargon to this unexpected book that treats each song in this inscrutable cycle as an object in a cabinet of curiosities to be handled and enjoyed as well as theorised .Though it roams far, Schubert s Winter Journey never loses sight of the music that is its source. To finish the book is to come full circle; just as Schubert s narrator finds himself beginning his songs all over again, to the sinister accompaniment of the hurdy-gurdy man, so the reader finds himself drawn back to CD and concert hall to attempt this elusive and allusive winter journey one more time. Alexandra Coghlan, The Spectator (UK)

Schubert s Winter Journey provides a fascinating insight not just into the song cycle and the mindset of its composer but also that of a leading interpreter. Hannah Nepil, Financial Times (UK)

Winterreise, Bostridge argues, is a message in a bottle set afloat in the cultural ocean of 1828 and, with the confidence of a master oarsman, Bostridge sails these waters with awesome virtuosity. Neil Fisher, The Times (UK)

Bostridge encourages us to experience the work as though we were eavesdropping on a performer's own dilemmas. . . . Like the cycle itself, the study is a heady, circling journey of cross-reference, association and allusion. Hilary Finch, BBC Music Magazine (Music Books Choice)

In the book, he inhabits not only the work, but the man. And his most important achievement in writing it it sends you scurrying back to the music. Dan Cairns, Sunday Times (UK)

Bostridge s highly enjoyable book provides a rewarding, intelligently written companion to the piece for those who know it well, as well as for those who are approaching it for the first time. . . . This wide-ranging book is a fine tribute to his devotion to Schubert s masterpiece. Nick Rennison, Sunday Times (UK)

The songs are discussed in a series of insightful and gracefully written chapters, each drawing on a vast range of learning in cultural and social history, musicology and psychoanalysis. Ivan Hewett, Daily Telegraph (UK)

Where Bostridge excels is in taking the limpid, surface-simple texts and unpacking he vast amount of reference, allusion, context and ambiguity in them. . . . Bostridge leaves the reader (and listener) enchanted, and no amount of interpretation can outweigh hearing this work again with refreshed ears. Having long admired Bostridge as a singer, I now look forward to following his parallel career as an eloquent and enlightening writer on music. Stuart Kelly, Scotsman

As one of our greatest exponents of German song, lieder, [Bostridge] brings to this book an insight which must elude most other scholars. . . . What makes his approach so especially appealing is his love of Winterreise and his openness to its possibilities. Alan Taylor, The Herald (Glasgow)

Bostridge s illuminating reflections will guide readers as they listen again, or for the first time, to the nuances of Schubert s great work. Publisher s Weekly

Usually great singers cannot explain what they do. Ian Bostridge can. Whether or not you know Schubert s Winter Journey, the book is gripping because it explains, in probing, simple words, how doomed love is transformed into art. Richard Sennett

…mehr
flections will guide readers as they listen again, or for the first time, to the nuances of Schubert's great work." (Publisher's Weekly)

"Usually great singers cannot explain what they do. Ian Bostridge can. Whether or not you know Schubert's Winter Journey, the book is gripping because it explains, in probing, simple words, how doomed love is transformed into art." (Richard Sennett)