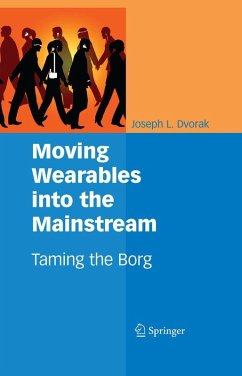 Andere Kunden interessierten sich auch für
Produktbeschreibung
Joseph Dvorak has over 10 years experience in wearable technology and design. He led the Conformables project at Motorola which researched highly wearable and easy to use devices and applications. He was the Motorola Scientist in Residence at the MIT Media Lab from 2005 - 2007. He is an Adjunct Professor at Florida Atlantic University where he teaches courses in wearable technology and systems. He holds 14 patents in wearable technology. He is currently the Technology Futurist in the Motorola Corporate Technology Office. He has a PhD in Computer Science from the University of Illinois at Chicago. The term "Wearable Technology" encompasses a wide spectrum of devices, services and systems for wireless communications and the web. Wearables are by their nature closely associated with the person, and their use generates many social and even legal issues that have little to do with specific technologies. This professional book discusses the characteristics and design elements required for wearable devices and systems to be widely adopted by the mainstream population for use in their everyday lives. It shows how wearables can help people with daily tasks without getting between the user and the task. Moving Wearables into the Mainstream also introduces concepts such as Operational Inertia that form a mindset conducive to designing wearables suitable for broad adoption by consumers. This book provides insight into legal and cultural issues potentially unfamiliar to research engineers, as well as a broad discussion of technologies underlying wearable devices. Moving Wearables into the Mainstream is designed for a professional audience of practitioners and researchers in industry. This volume is also suitable as a secondary advanced-level text or reference book for students in computer science and electrical engineering. TOC:Acknowledgments.- Preface.- Introduction To Wearables.- Background.- Wearable System Applications.- Overview Of Wearable Systems.- Mainstream Wearable Design.- Overview Of Mainstream Wearable Design .- Mainstream Wearable Design In Detail.- Supporting Technologies.- Awareness And Immersion.- Communication And Power.- Mainstream Wearable Systems User Interfaces.- Sight And Sound User Interfaces.- Emerging User Interfaces.- Some Tough Hurdles And The Future.- Social Issues Of Wearables.- Future Of Wearable Systems.- Why Tame The Borg?.- Glossary Of Wearable Terms.- Index.